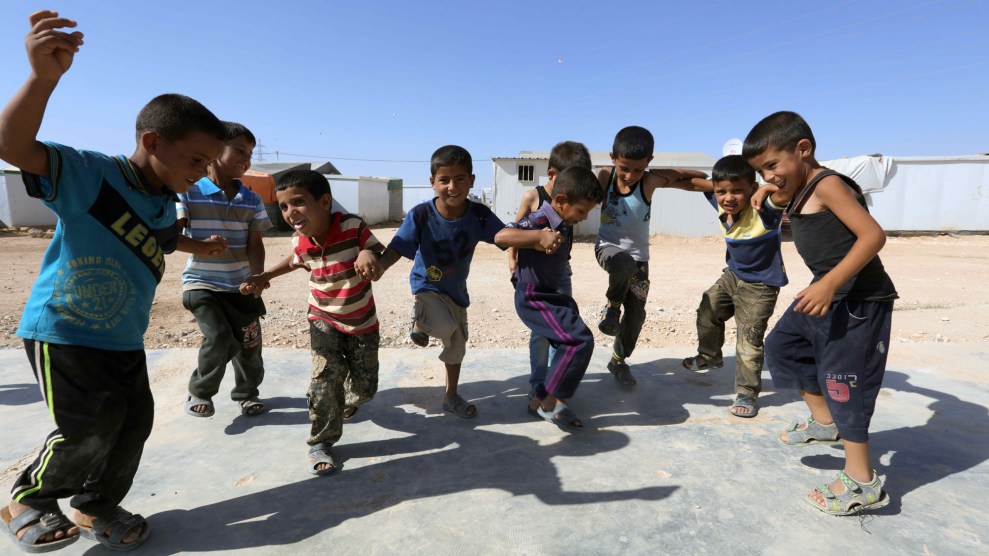 It’s been one year since President Barack Obama announced that the United States would take in 10,000 Syrian refugees by this September. After much criticism from Republican politicians and a slow start, the administration picked up the pace of resettlement and met its goal a month ahead of schedule. Today, the United States is resettling its 10,000th Syrian refugee.

In a statement, National Security Advisor Susan Rice welcomed the newcomers. “On behalf of the President and his Administration, I extend the warmest of welcomes to each and every one of our Syrian arrivals,” Rice said.

The newest group of Syrian refugees are arriving in California and Virginia from Jordan. Among them is Nadim Fawzi Jouriyeh, a 49-year old former construction worker from Homs. He, his wife Rajaa, and their four children are being resettled in San Diego. Jouriyeh told the Associated Press that in anticipation of his journey, he feels “fear of the unknown and our new lives, but great joy for our children’s lives and future.”

Most of the 10,000 Syrian refugees who have been granted asylum in the United States look a lot like the Jouriyeh family. According to the State Department, approximately 80 percent are women and children. Roughly 60 percent are under the age of 18. The vast majority of male refugees are fathers, grandchildren, or older siblings. Only 0.5 percent are adult men unattached to families.

In the last year, Syrian refugees have been placed in 39 different states, with California and Michigan hosting the largest numbers. More than half of have been resettled in eight states—California, Michigan, Arizona, Texas, Pennsylvania, Illinois, Florida, and New York.

Although the goal of admitting 10,000 Syrians in this fiscal year marked a six-fold increase over last year, the number of refugees resettled this year only accounts for about two percent of the total number of Syrian refugees the United Nations says are in need of resettlement. Presidential nominee Hillary Clinton has proposed a target of admitting 65,000. Donald Trump has ridiculed that proposal. In April, he told supporters in Rhode Island to “lock your doors” to stay safe from Syrian refugees. “We don’t know who these people are. We don’t know where they’re from,” he warned. In December 2015, Trump tweeted that a Syrian family who crossed the US-Mexico border were “ISIS maybe?”

Last month, the Department of Homeland Security told Mother Jones that the Syrian refugees it is currently vetting are subject to the same stringent security and medical requirements as other asylum-seekers. Those applying for refugee status must go through a 21-step vetting process that includes security screenings by the National Counterterrorism Center, the Federal Bureau of Investigation, the Department of Homeland Security, and the State Department.

White House spokesman Josh Earnest told reporters that Obama plans to increase the number of Syrian refugees admitted to the United States by “a few thousand more” next year. Secretary of State John Kerry is expected to put the administration’s proposal before Congress in the coming weeks. Any increase is likely face opposition from Republican lawmakers who have resisted the introduction of more Syrian refugees to the United States. “The president would like to see a ramping-up of these efforts but he’s realistic,” said Earnest.