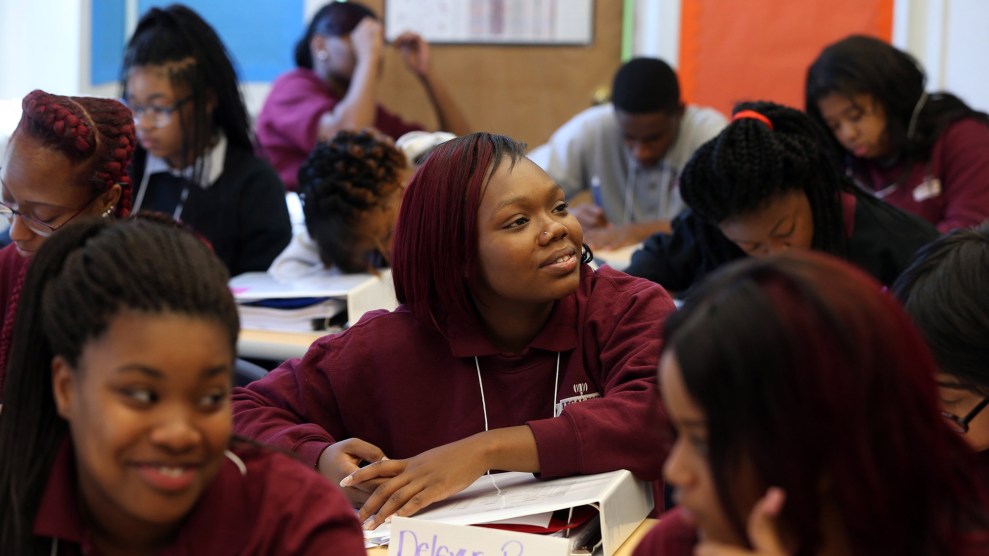 In late July, the NAACP called for a national moratorium on charter schools, claiming they target low-income and minority communities with practices mirroring the predatory subprime mortgage lending industry. Now a group of more than 160 black civic leaders is asking the civil rights group to reconsider, arguing that charters create opportunities for black families that could allow minority students to excel.

In a September 21 letter, a coalition of educators, current and former politicians, public officials, and black leaders claimed that a charter school moratorium would deny parents the opportunity to choose “what’s best for their children”—and restrict access to high-quality alternatives to traditional public schools.

“The proposed resolution cites a variety of cherry-picked and debunked claims about charter schools,” the letter reads. “The notion of dedicated charter school founders and educators acting like predatory subprime mortgage lenders—a comparison the resolution explicitly makes—is a far cry from the truth.”

The NAACP’s proposed resolution, which will be voted on at the national board meeting next month, said that charter schools contribute to racial and socioeconomic segregation and raised concerns over disproportionately “punitive and exclusionary” disciplinary practices, fiscal mismanagement, and lackluster oversight. A few weeks earlier, the Movement for Black Lives, a network of 50 organizations brought together by Black Lives Matter, released a policy agenda that included a similar call to curb the growth of charters.

While the charter school industry is littered with the occasional bad actor, and some charters have even been found to practice “skimming”—illegally screening out potentially challenging students, according to a 2013 Reuters investigation and a recent report by the ACLU and Public Advocates, a public interest law firm—the pro-charter letter highlighted research showing the positive academic benefits and opportunities for black students at charters. Here are three of its main arguments:

1. Black students stand to make short-term academic gains: The letter, citing a study from Stanford’s Center for Research on Educational Outcomes (CREDO), argues that black students benefit from added exposure to charter schools. The 2015 study of 41 cities in 22 states found that students attending charter schools in those areas made slightly higher academic gains in both math and reading compared to students in traditional public schools. The gains were particularly pronounced for low-income, black, and Hispanic students, as well as English-language learners. Poor black students, for instance, received the equivalent of 59 additional days of math learning and 44 days of reading learning. For poor Hispanic students, the gains were 48 days of math instruction and 25 days of reading.

Andrew Maul, an assistant professor at the University of California-Santa Barbara’s Graduate School of Education, questioned the CREDO report’s research methods, including that the sizes of the effects “are very small.” (In response, CREDO noted that the study looked at the change in student test scores from year-to-year as a sign of academic growth, rather than the test scores themselves.)

An earlier study commissioned by the US Department of Education in 2010 showed modest improvements for low-income and underachieving students who attended urban charter middle schools. They scored higher on math tests but fared the same on reading scores as their peers at traditional public schools. Students from higher-income backgrounds saw adverse outcomes in math and reading scores. Overall, on average, attending charter middle schools with lotteries had no “significant impacts” on student achievement.

2. There are long-term gains, too: As Kristina Rizga wrote in her latest magazine story, 35 percent of Philadelphia students attend charter schools. While the growth of charters has put a financial strain on the local school district—and contributed to school closures and the push out of black educators—many students have seen improvements in academic performance. Between 2006 and 2012, 61 percent of Philadelphia charters posted higher scores in math and reading than peers at traditional public schools, according to CREDO. In the long run, according to a study of outcomes for students in Chicago and Florida, students attending charter high schools were more likely to graduate, stay in college, and earn more money than students in traditional public schools, according to a 2014 report by Mathematica.

Still, the 2015 CREDO report notes that the effects vary by region. Students in urban areas such as Boston, Memphis, and Newark, for instance, saw positive gains in math and reading. But in the Southwest, Florida, and Texas, students saw adverse outcomes.

3. Black families view charter schools as “immensely popular”: The letter also notes that charters are a popular alternative to traditional public education—in fact, tens of thousands of students across the country are currently on charter school waitlists. A recent survey conducted by the National Alliance for Public Charter Schools showed that at least 80 percent of black, Hispanic, and low-income parents supported the opening of charter schools in their area. And since 2000, the number of charters nearly quadrupled, from about 1.7 percent to 6.6 percent of public schools. The letter notes that the moratorium would affect 700,000 black families, as black students make up 27 percent of those enrolled in charter schools.

In Massachusetts, voters will decide this year on a ballot measure seeking to expand the state’s annual quota on charter schools to add 12 more to the current limit. A Brookings study in mid-September found that charter schools benefited students in the state’s urban areas, particularly for traditionally disadvantaged students. For students in rural and suburban areas, those benefits disappear.

“For many urban Black families, charter schools are making it possible to do what affluent families have long been able to do: rescue their children from failing schools,” the letter notes, adding: “Making charter schools the enemy in a fight for adequate education funding doesn’t serve the interest of all students. We cannot sacrifice another generation of students to the status quo.”