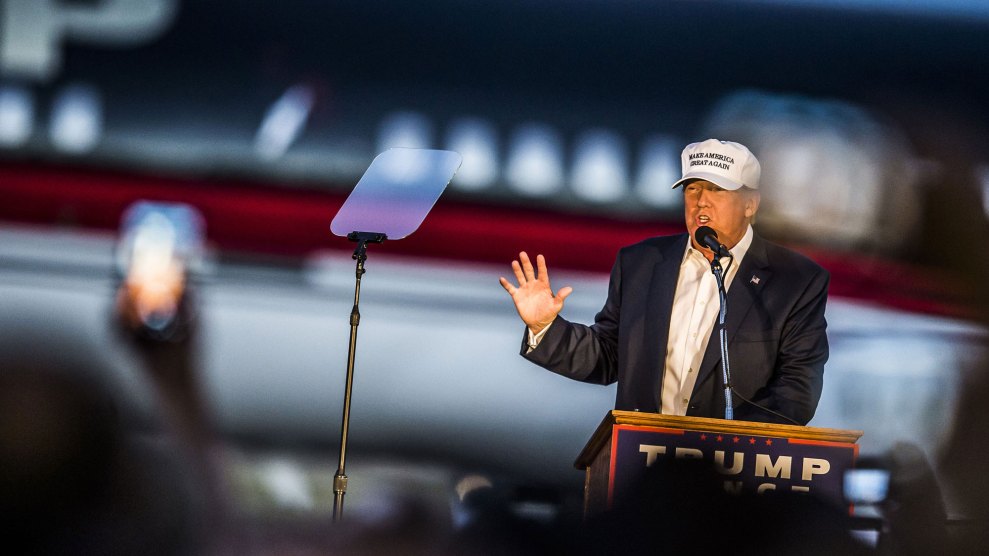 Donald Trump used the weekend bombings in New York and New Jersey to amp up his call for profiling of Muslims. “You know, our police are amazing—our local police, they know who a lot of these people are,” Trump said in a Monday appearance on Fox & Friends, referring to terrorists. But, he said, “they’re afraid to do anything about it because they don’t want to be accused of profiling, and they don’t want to be accused of all sorts of things.”

Only a few days after picking up the endorsement of the nation’s largest police union, Trump was, without evidence, making an incendiary accusation about some of his most important supporters—that police are knowingly letting terrorists walk free because they’re too politically correct. (In reality, the Elizabeth, New Jersey, police department that apprehended the alleged bomber was not familiar with the suspect, although the family’s chicken shop had received noise complaints.)

Just as notable is what Trump proposed instead. As an example of what more effective policing would look like, the Republican presidential nominee pointed to Israel. “You know, in Israel they profile,” he said. “They’ve done an unbelievable job, as good as you can do.” If a person looks suspicious in Israel, “they will take that person in.” He added, “They’re trying to be politically correct in our country and this is only going to get worse.”

There are many components to Israeli-style profiling, but a key aspect is racial profiling. Being of “Arab nationality” is enough to get you flagged by screeners, interrogated, and maybe strip-searched at an Israeli airport. The US State Department’s travel advisory page for Israel even includes a warning about the country’s racial profiling: “Some U.S. citizens of Arab or Muslim heritage have experienced significant difficulties and unequal and hostile treatment at Israel’s borders and checkpoints.” Case in point: Former Secretary of Health and Human Services Donna Shalala, who is of Lebanese descent, was detained and interrogated at Tel Aviv’s Ben Gurion Airport in 2010, despite having just returned from a meeting with Israeli Prime Minister Benjamin Netanyahu.

Trump, for his part, has previously made clear that he’s interested in profiling Muslims specifically. “We’re going to have to do things that we never did before,” he told Yahoo News in November when asked if he’d consider warrantless wiretapping of American Muslims. He added, “We’re going to have to do things that were frankly unthinkable a year ago.” In that same interview, he declined to rule out creating a database of Muslims in the United States and suggested the government should conduct more surveillance of mosques. He proposed hiring ex-New York Police Commissioner Ray Kelly, whose department’s “Demographics Unit” spied on select “ancestries of interest” and even infiltrated a Muslim Students Association rafting trip. (For its years of work, Kelly’s Demographics Unit produced a total of zero terrorism indictments and was ultimately shut down as a result of a lawsuit.) Trump even entertained the idea that the government could shut down mosques.

A few weeks later, Trump took his religious profiling several giant steps further, unveiling his proposal to ban Muslims from entering the United States. Trump has never clarified how such a ban would be enforced, but it would by definition entail wide-scale profiling by customs officials. That proposal is still posted on his website. Trump revisited the subject in June, after the mass shooting at a gay nightclub in Orlando. “I think profiling is something that we’re going to have to start thinking about as a country,” he said, invoking Israel as an example of a successful program. He has repeatedly cited racial profiling—or fear of being accused of racial profiling—in his discussion of the shooters in the 2015 San Bernardino attack, alleging that neighbors of the couple had seen bombs scattered across the floor but not done anything. This was, again, baseless; there is no evidence that anyone ever saw the bombs.

Trump’s positions on many issues have fluctuated wildly. But his solution to threats against Americans has been uncharacteristically consistent, if alarming to many observers: an expanded, unconstitutional police state targeting a religious minority.