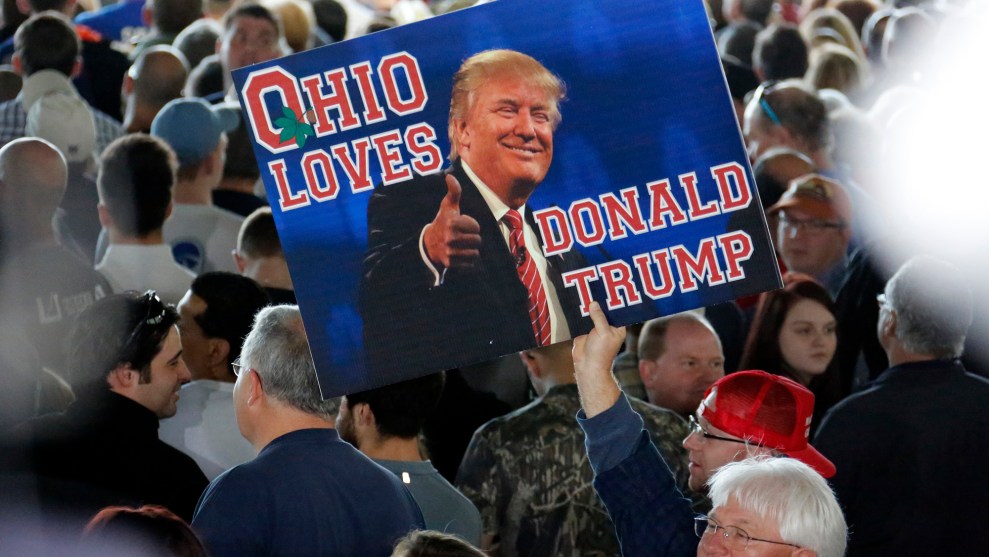 A supporter of Donald Trump holds a sign at a rally at Youngstown-Warren Regional Airport in Vienna, Ohio, on March 14, 2016.Gene J. Puskar/AP

People across America reacted with shock Thursday to a video of racially charged comments by Donald Trump’s campaign chairwoman for Ohio’s Mahoning County, who denied that racism existed there before Barack Obama became president—remarks that quickly led her to resign. But one group was probably less surprised to hear this kind of racially divisive language: the black residents of Mahoning County.

Mahoning County, in the heart of the Rust Belt, has received outsize attention this year for the exodus of once-loyal blue-collar Democratic voters into the Trump camp. The overwhelming focus of this attention has been economic: In this poster child of industrial decline, the prevailing narrative goes, residents opposed to free trade have flocked to Trump and his promise to restore the Rust Belt to better times. But the comments by Kathy Miller, Trump’s Mahoning chairwoman, reveal a different story that African American residents have been telling all along—one of political shifts driven by issues of race and racism.

“I don’t think there was any racism until Obama got elected,” Miller, a real estate agent, told the Guardian recently a video-taped interview posted Thursday. “Now, you know, with the people with the guns and shooting up neighborhoods and not being responsible citizens, that’s a big change, and I think that’s the philosophy that Obama has perpetuated on America.”

Miller continued, to the wide-eyed astonishment of the reporter, “And if you’re black and you haven’t been successful in the last 50 years, it’s your own fault. You’ve had every opportunity, it was given to you.”

Mahoning County is ground zero for Trump’s rise. It’s the home of Youngstown, famous for its decline from a booming steel town in the first half of the 20th century to a downtrodden playground for the mob in the second half. Now Youngstown is a struggling, down-and-out city where signs of rehabilitation are dwarfed by the lingering effects of the economic collapse and the poverty of many of the city’s black residents. Following white flight to the suburbs, Youngstown is nearly half black. Thanks to the strong influence of labor unions, for decades the region has been a Democratic stronghold. But in the Ohio Republican primary in March, Trump won the region handily, with the help of many Democratic voters who switched parties to support Trump.

For black Youngstown residents, Miller’s comments reflect what they’ve long said: that Trump’s popularity there has a lot to do with race.

I visited Youngstown in June. Most of the people I spoke with traced Trump’s appeal to the economy and particularly to the issue of trade. Union officials worried that if Hillary Clinton didn’t match Trump’s zeal in opposing the Trans-Pacific Partnership trade deal, she would lose Democratic votes in the region, and with them the state of Ohio. And that is essentially the story I wrote.

But a few people voiced a different view of Trump’s appeal in Youngstown. For them, Miller’s comments reflect what they’ve long said: that Trump’s popularity in Youngstown has a lot to do with race. Unsurprisingly, those people were black.

“I have some other strong personal feelings about this that nobody wants to talk about,” Jaladah Aslam, a former public sector union employee and former local Democratic Party official, told me this summer. “This whole racist rhetoric plays well with some people here.”

Aslam recalled footage she had seen of a clash between supporters and protesters at a Trump rally. “I saw a man screaming at this one guy, ‘Go back to Africa,’ and I’m like, ‘Really? We’re talking like that again?'” she said. “That means that people never gave up that thinking.” When it comes to Youngstown and its environs, Aslam believes nasty rhetoric toward African Americans never went away; it just went out of sight.

Aslam was born and raised in Youngstown. In the late 1990s, she left the city limits and bought a house in the suburb of Austintown Township. Her first summer in the neighborhood, she was in her backyard when she overheard a visitor at her neighbor’s house a few yards over. “I don’t believe this shit,” her neighbor’s friend said. “The nigger has the new pool in the neighborhood.” The incident alerted her to the way some locals think and talk about black people when they don’t think black people are listening: “In their mind, why should somebody of color have anything nice?”

Trump’s rise reminded Aslam of that summer day nearly two decades ago. “It comes back to me in the moment of Trump because it reminds me of that thought process, it reminds me people feel that way,” she said. “And unfortunately, there are a lot of people who feel that way [in Youngstown]. There are a lot of people who are comfortable with what Trump says about Hispanics and Muslims.”

Aslam’s hunches are borne out by academic research. Last year, a doctoral student at Cleveland State University found that the American metropolitan area where the N-word showed up most frequently as an internet search term was Youngstown. He published his findings in the Cleveland Plain Dealer, noting that research out of Harvard shows that search data “does actually correlate with other measures of racism” and that “the private use of coarse racial terminology is the first stage of prejudice.”

Youngstown might not be an obvious epicenter of American racism, but its history helps explain its racial tensions. There’s academic research demonstrating that support for far-right nationalist political parties in Europe correlates with a perceived loss of power at the hands of immigrants or other ethnic groups—a fact that helps explain Trump’s rise in Youngstown and the dynamic Aslam sensed for years. At 45 percent black and 9 percent Latino, Youngstown is a majority-minority city.

“Growing up in this community, there has always been a racist undertone here.”

“The Trump phenomenon is basically a middle-class white movement because they feel disenfranchised, they feel like they are losing out,” Rufus Hudson, an African American former Youngstown city council member who serves on the local Democratic Party’s executive committee, told me when I visited. “I think there’s that quiet undertone that after eight years of Barack Obama, there’s people that think, ‘We’re falling behind, we’re not getting our fair share.'” With Miller’s remarks this week, all of a sudden it wasn’t so quiet anymore.

“Growing up in this community, there has always been a racist undertone here,” Hudson said. “I actually didn’t realize that until I moved away. When I moved to Houston, and I lived down there [for 10 years] and then I come back, and it’s like, wow, I mean, it’s like kind of in your face.” He nodded toward the car he drives, a Lexus. As a black man driving a nice car, he said he had been pulled over 17 times in the area but had never been issued a citation.

By Thursday evening, the Trump campaign had found a new Mahoning County chair, a black state GOP official from Youngstown named Tracey Winbush. Upon joining the campaign, she immediately deleted her entire Twitter history of about 17,000 tweets. Many of them had been critical of Trump. In February, following Trump’s first win of the Republican primary campaign, she tweeted out an article bearing the headline, “A Racist, Sexist Demagogue Just Won The New Hampshire Primary.”