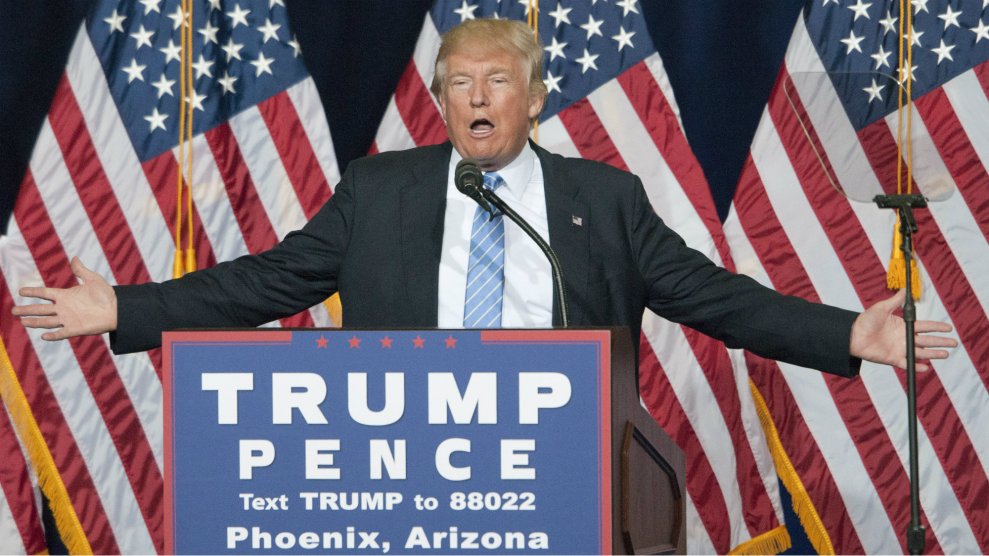 One of the many mysteries of the bizarre 2016 presidential campaign is how GOP nominee Donald Trump has seemingly gotten away with the big lie that he opposed the Iraq War. The celebrity mogul has repeatedly boasted that he had the foresight and judgment to be against George W. Bush’s 2003 invasion of Iraq. Yet there is nothing in the public record suggesting that Trump was anti-war before it began. The only known public statement from Trump on this subject shows the opposite: that he favored the military action. In September 2002, he appeared on Howard Stern’s show, and the shock jock asked him if he supported invading Iraq, a move that the Bush-Cheney administration was obviously prepping for. “Yeah, I guess so,” Trump replied. Not very Churchillian, but it was definite.

Yet Trump has insisted—as he did during a speech in June—that he “was among the earliest to criticize the rush to war, and yes, even before the war ever started.” And during this campaign he has not always been called out when bragging that he opposed the war. During a joint 60 Minutes interview in July with his running mate, Mike Pence, Trump asserted, “I was against the war in Iraq from the beginning,” and he added, “Frankly, I’m one of the few that was right on Iraq.” Interviewer Lesley Stahl did not challenge Trump on this point and instead focused on the fact that Pence had voted for the war while serving as a member of Congress.

Now there is more evidence that Trump was not a foe of the war before it was launched.

In a 2011 video interview with the Wall Street Journal, Trump was asked by the newspaper’s Kelly Evans about the ongoing US intervention in Libya. He indicated he was no fan of this Obama move and that he was opposed to intervening in Libya on humanitarian grounds: “I’m only interested in Libya, if we take the oil. If we don’t take the oil, I have no interest in Libya.” Trump then turned toward the subject of Iraq: “I always heard that when we went into Iraq, we went in for the oil. I said, ‘Ah that sounds smart.'”

This suggests that Trump was not initially opposed to the invasion and, moreover, that he was fine with it, as long as the United States somehow ended up with control of Iraq’s oil. The remark is hardly the comment of someone who prior to the invasion considered the war a big mistake. It indicates that Trump came to see the war as wrong because his initial expectation—the United States would seize Iraq’s oil—was not met.

After making this comment, Trump had a difficult time answering Evans’ follow-up questions about his assertion that the United States could still take over Iraq’s oil supplies and make a profit. It was typical Trump: He just insisted that were he in charge, he could do it. (At the time, Trump was considering entering the 2012 presidential race, a contest he eventually avoided.)

By the way, in this WSJ interview, Trump contradicted his own position on Libya. Weeks earlier, he had called on Obama to intervene in Libya—not to grab oil but to stop Libyan leader Muammar al-Qaddafi from slaughtering rebel forces and civilians. In a video blog, Trump had proclaimed, “I can’t believe what our country is doing; Qaddafi in Libya is killing thousands of people, nobody knows how bad it is, and we’re sitting around—we have soldiers all over the Middle East, and we’re not bringing them in to stop this horrible carnage, and that’s what it is. It’s a carnage.”

Policy consistency is not a Trump trait. He often appears to spout whatever he thinks is politically necessary at the moment. On the campaign trail, he has attacked President Barack Obama and Hillary Clinton for withdrawing US troops from Iraq—actually, it was Bush’s decision, not theirs—even though that was what Trump himself called for at the time. And he keeps citing his opposition to the Iraq War as proof of his national security savvy. But this claim is more likely proof of a penchant to change positions and a willingness to say anything.