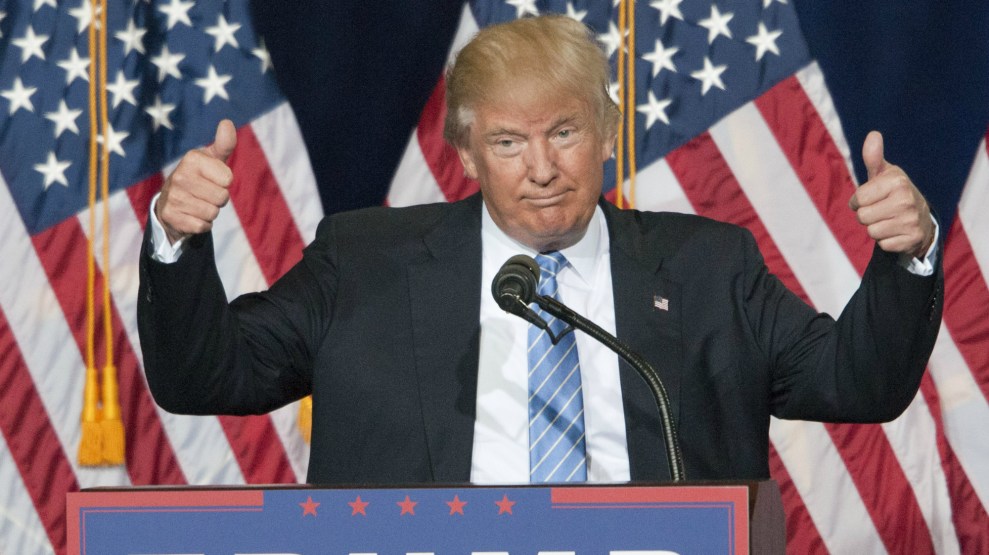 Last month, the Donald Trump campaign promised a reset of its minority outreach efforts, aimed at reversing Trump’s tanking poll numbers among voters of color and his lack of support among nonwhite political figures. After his hardline immigration speech on Wednesday night, it looks like that effort isn’t going well.

Three campaign surrogates have revoked or are reconsidering their support for Trump following his speech in Phoenix, Politico reports. In the address, Trump outlined a 10-step plan for immigration policy and had harsh words for undocumented immigrants. He promised to deport “criminal aliens” in his first hour in office, said he would “cancel” President Barack Obama’s executive order temporarily protecting some 5 million undocumented people, and called for the use of an “ideological certification” to ensure that visa applicants agree with American values. The speech was met with praise from white nationalists.

Shortly after the speech ended, Jacob Monty, a member of Trump’s recently formed Hispanic Advisory Council, announced his resignation from the group.

“I was a strong supporter of Donald Trump when I believed he was going to address the immigration problem realistically and compassionately,” Monty, a Houston attorney, told Politico. “What I heard today was not realistic and not compassionate.”

On Thursday, Monty added that he thought it was clear that Trump “doesn’t want to win.”

In an email to Trump campaign advisers and Hispanic outreach staffers at the Republican National Committee, Ramiro Pena, a Texas pastor who also serves on Trump’s Hispanic Advisory Council, voiced his disappointment with the speech and said, “It is difficult to [imagine] how I can continue to associate with the Trump campaign.”

Pena continued, “I am so sorry but I believe Mr. Trump lost the election tonight. The ‘National Hispanic Advisory Council’ seems to be simply for optics and I do not have the time or energy for a scam.”

Alfonso Aguilar, a former Trump critic who, along with other conservative Latino activists, wrote a letter in July endorsing Trump and encouraging Latinos to support him, told Politico that he felt “misled” after Wednesday’s speech.

“I can tell you there’s a real possibility we will withdraw support from Donald Trump because of that disappointing speech,” he said. Aguilar officially withdrew his support of Trump during a Thursday morning appearance on CNN.

On Thursday, Leslie Sanchez, a CBS News contributor and author, reported that half of Trump’s Hispanic Advisory Council is preparing to resign. The Trump campaign has not responded to the report.

Trump has previously called Mexicans “rapists,” suggested that a federal judge was biased against him due to his Mexican heritage, and put his promised wall along the US-Mexico border at the center of his campaign. Last month, his campaign seemed to be taking steps to depict him as willing to adopt a less harsh stance on immigration. After Trump’s Hispanic Advisory Council met with the candidate, reports suggested that Trump was open to a path for legalization for some undocumented immigrants. The Trump campaign immediately denied those reports, saying that those predictions were overblown and the candidate would not change his hardline stance that calls for the deportation of all undocumented immigrants.

Trump’s Wednesday night address appeared to put an end to any speculation that Trump would be moderating his position in a meaningful way. It came hours after the candidate traveled to Mexico for a meeting with President Enrique Peña Nieto. During a press conference after the meeting, Trump said that while he had discussed the construction of the wall with Mexico’s president, they had not discussed who would pay for it. But during a Thursday morning rally in Ohio, Trump promised that Mexico would in fact pay for the wall.

In a speech Thursday in Ohio, Trump said, “We will oppose bigotry and hatred in all its forms.” It may have come too late to win back at least a few prominent Latinos he could once count as supporters.

This story has been updated to include Aguilar’s decision to withdraw his support from Trump and reports of more advisers leaving Trump’s Hispanic Advisory Council.