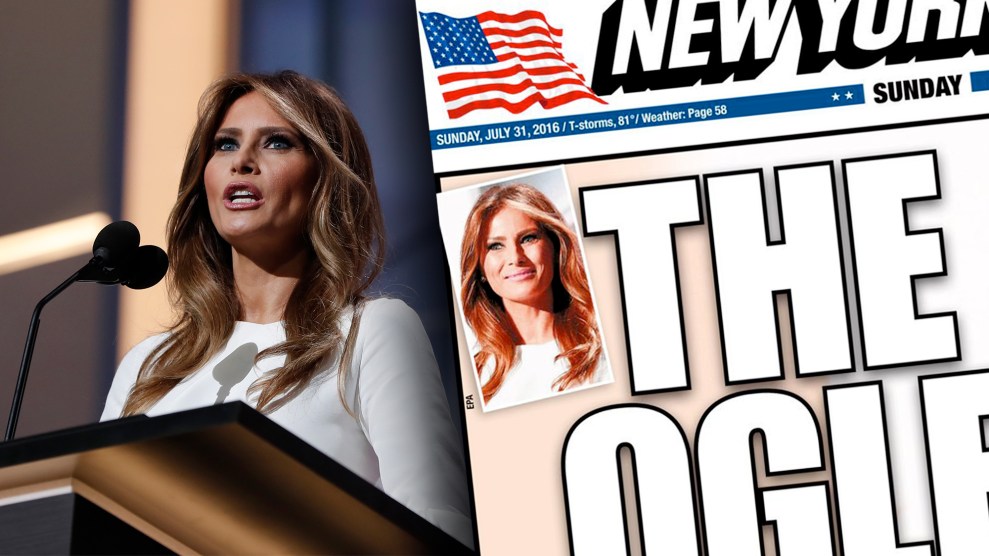 Melania Trump released a letter Wednesday morning from a top immigration lawyer denying there were any problems with her immigration record. Questions about the Slovenia-born model’s status have persisted ever since the New York Post published a racy photo spread in July, reportedly shot in Manhattan in 1995, raising the possibility that Trump worked without proper authorization in the United States before securing a work visa.

Donald Trump’s campaign originally promised that his wife would host a press conference to answer reporters’ questions about her immigration status, but that never happened. She took to Twitter instead.

“I am pleased to enclose a letter from my immigration attorney which states that, with 100% certainty, I correctly went through the legal process when arriving in the USA,” Trump wrote on Twitter on Wednesday morning. She accompanied her update with a signed letter from Michael Wildes, an immigration attorney who has previously represented Trump Models, the mogul’s New York modeling agency, and secured visas for models appearing in Trump’s Miss Universe pageants.

According to the account, Trump first arrived in the United States on a visitor’s visa and then quickly qualified for an H-1B visa, which allowed her to work legally in the United States beginning on October 18, 1996. “The allegation that she participated in a photo shoot in 1995 is not only untrue, it is impossible,” Wildes noted. “In reality, through an interview with Mrs. Trump, we ascertained that the photo shoot in question did not occur until after she was admitted to the United States in H-1B visa status in October 1996.” Melania Trump’s Twitter post was not accompanied by any further documentation.

But the letter released today does not answer all the questions about Melania Trump’s immigration story. For example:

Melania Trump’s letter contradicts the first account of the French photographer of the photo series, Jarl Ale de Basseville, who told the New York Post in August that the shoot occurred at his Manhattan apartment-studio in 1995. The nude pictures appeared in the January 1996 issue of Max Magazine, according to the New York Post—several months before Trump officially immigrated to the United States on her work visa.

But now the photographer says he can’t remember when exactly the shoot took place. When Mother Jones reached de Basseville on the phone in Paris on Wednesday, he flatly denied that it had happened in 1995.

Instead, he insisted the photos were taken in 1996 around Union Square in Manhattan, though he could not remember the month. “I’ve done more than 100,000 photos in my life,” he explained, acknowledging, “It’s complicated with me.” But he was clear that the shoot occurred “in 1996 for sure.” (He remembers the year because he was having a fight with his ex-wife at the time about his work and travel. “So I remember, because it’s drama, you know?”)

He also said the magazine in question, Max Magazine, came out in “early 1997,” not in January 1996, as originally reported by the New York Post. “I can’t answer for the New York Post,” he said. “They made a mistake.”

“There are so many lies, what are we to believe or not believe?” he said. Mother Jones reached out to the exposé’s author at the Post, Isabel Vincent, for a response, but did not hear back.

The Post originally reported that the edition with Melania Trump’s risqué photos featured Cindy Crawford on its cover. But that edition came out in February, 1997. (Crawford was not on the cover of the January 1996 magazine.)

2. Why did Melania Trump say she returned to Slovenia every “few months” to renew her visa when her lawyer says she didn’t need to?

Today’s letter from Wildes says that at the time, the work visa known as the H-1B was capped at one year for Slovenian citizens, requiring Trump to make yearly trips back to her home country to renew the permit. She did this, according to the letter, five times.

Previously, Trump has said that she followed immigration rules, and that after her arrival in the United States she returned home “every few months” to renew her visa—something she would not have had to do if she’d had an annual work authorization.

“It’s a little vague,” said immigration attorney Pankaj Malik, a partner at New York-based Ballon, Stoll, Bader & Nadler who has worked on immigration issues for more than two decades. “If everything is accurate, why don’t you just put in copies of her approval notices? Then release the documents.”

Wildes’ version also contradicts earlier statements by Trump’s original modeling agent in the United States, Paolo Zampolli, who told the Los Angeles Times in August that he hired her to come to New York from Milan—and secured work approval for three years, not one. The Los Angeles Times reported that Zampolli “helped her obtain an H1-B visa, which allowed her to stay in the U.S. for three years and do modeling work.”

3. How did Melania Trump get her green card?

Not by marriage, according to Wildes.

Wildes originally told Univision in August that Trump obtained a green card in 2001, “based on marriage,” even though she married Donald four years later.

But today’s letter from Wilde now corrects his earlier statement: “Mrs. Trump self-sponsored for a green card as a model of ‘extraordinary ability,’ and on March 19, 2001 she was admitted to the United States as a lawful permanent resident.”

On the campaign trail, Donald Trump has railed against the H-1B program and those who he says abuse it. “I will end forever the use of the H-1B as a cheap labor program and institute an absolute requirement to hire American workers first for every visa and immigration program,” the GOP nominee said in March. “No exceptions.”

UPDATE Wednesday September 14, 2016, 6:20 p.m. EST: The New York Post has updated its original story about Melania Trump’s Max Magazine photospread: “Photographer Alé de Basse­ville later told The Post that he misspoke, and the photo session actually took place in 1996 in Manhattan, and appeared in a 1997 issue of the magazine.”