The state of Alabama’s violent attacks on voting rights protesters in Selma helped drive the passage of the Voting Rights Act in 1965. Back then, the Alabama Supreme Court was an all-white body. Today, 50 years after the passage of the seminal civil rights law, it still is. Only two African Americans have ever served, and only after first being appointed by a governor. The state’s other highest appellate courts, the Court of Criminal Appeals and the Court of Civil Appeals, have never seen a black judge, despite the fact that more than a quarter of the state’s voting-age population is African American. (Only two African Americans have been elected to a statewide office in Alabama. Ever.)

According to a lawsuit filed Wednesday in an Alabama federal court by the Lawyers Committee for Civil Rights Under Law and other voting rights advocates, that situation is by design, and a clear violation of the Voting Rights Act that the state helped inspire. The lawsuit is somewhat unusual. The Voting Rights Act hasn’t been used much in judicial election cases, even though the Supreme Court ruled in 1991 that it applied to them. That may be because most states have abandoned judicial elections, particularly partisan ones. Alabama is one of only seven states that continue to hold partisan judicial elections, and one of only five of those that still hold at-large, or statewide, judicial elections rather than single-member district voting.

It’s a system that ensures that a white voting bloc can routinely trump the will of the 26 percent of state residents who are African American. At one time, the all-white justices were Democrats. Now, most of the justices are chosen in Republican primary elections, ever since strategist Karl Rove helped orchestrate a GOP takeover of the state courts in the early 1990s with a huge influx of corporate cash. While the parties have changed, the demographics have not. Every one of the 19 judges on the state’s highest courts is white.

Alabama intentionally shifted its elections…to dilute the voting strength of African Americans, “consistently erect[ing] barriers to keep black persons from full and equal participation in the social, economic and political life of the state.”

“We deemed the situation in Alabama to be a dire one,” said Kristen Clarke, president and executive director of the Lawyers’ Committee, in a press call about the case. “We believe these results are attributable to the method of voting for these judges.”

At-large elections in the South have a long and ugly history. In 1986, a federal judge concluded that after Reconstruction, Alabama intentionally shifted its elections from single-member district style voting to at-large races to dilute the voting strength of African Americans, “consistently erect[ing] barriers to keep black persons from full and equal participation in the social, economic and political life of the state.” The judge found more than 148 municipalities and 30 county school boards guilty of using racially motivated at-large voting systems. Most of those were dismantled through court orders, but judicial elections were left untouched.

That legacy helps explain the state of the Alabama Supreme Court today, and why voting rights activists see it as a ripe target for their lawsuit. Consider the court’s longtime chief justice, Roy Moore. Moore was the Alabama chief justice in the early aughts until he picked a fight with federal courts over his placement of a giant stone replica of the Ten Commandments in his courtroom. He was eventually removed from the bench after refusing to remove “the rock,” as it was known. He then went on to spend his newly found free time campaigning against a ballot initiative that would have removed racist language about poll taxes and segregated schools from the state constitution. (It lost.) 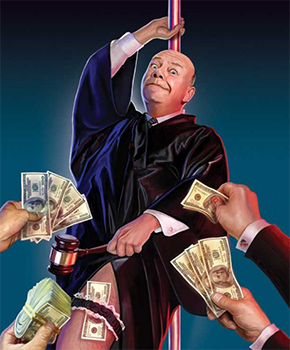 Is your judge for sale?
Mark Hammermeister

In 2004, Moore helped get his former legal aide elected to the same court. His protégé, Tom Parker, won the election despite reports that he’d been observed handing out Confederate flags at a party honoring the first grand wizard of the Ku Klux Klan. Alabama then reelected Moore again in 2012, defeating two other candidates in the Republican primary despite being heavily outspent. He remained in the job until May this year, when he was removed again for defying a federal court order and ordering lower court judges to deny marriage licenses to same-sex couples. He’s now fighting that removal. Parker, meanwhile, remains on the court.

Today’s lawsuit still might not remedy the Roy Moore problem, but it is designed to give African Americans a shot at breaking the white lock on the bench. The plaintiffs are asking the courts to require Alabama to change its voting procedures to create single-member judicial districts so that cohesive minority communities can elect a candidate of choice, as they do for state legislative elections. (Under the proposed plan, the chief justice would still be chosen in an at-large race.) The hope is that such a change would give African American voters a voice on courts that have a disproportionate impact on black state residents.

The complaint points out that Alabama’s court of criminal appeals looked approvingly on a law that allowed for mandatory life-without-parole sentences for juveniles convicted of murder, just a few years before the US Supreme Court ruled such sentences unconstitutional. Those sentences had fallen heavily on minority kids. Citing statistics compiled by the Equal Justice Initiative, the complaint highlights the fact that the state’s criminal justice system also reflects racial bias in the courts. Nearly 65 percent of all murders in Alabama involve a black victim, but 80 percent of the people on death row were convicted of killing a white person. Only 6 percent of all murders in the state involved a black defendant and a white victim, but more than 60 percent of the black death row inmates were sentenced for killing a white person. Even as African Americans make up only a quarter of the state’s residents, they account for more than 60 percent of its prison population as well. “We believe bringing Alabama into compliance [with the Voting Rights Act] will produce outcomes that are more fair,” Clarke said.