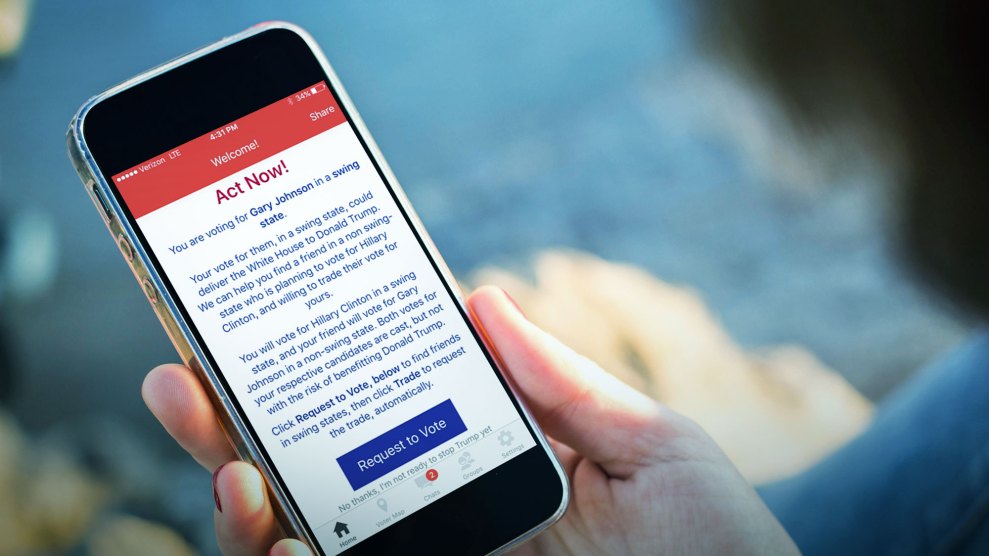 In 2000, Americans learned just how dramatically a third-party vote could swing an election, when Ralph Nader pulled thousands of Florida votes away from Al Gore, handing the narrow victory to George W. Bush.

This year, polls suggest that history could repeat itself. Hillary Clinton and Donald Trump are in a dead heat, while Libertarian Party candidate Gary Johnson polls around 8 percent nationally and Jill Stein, from the Green Party, polls about 2 percent. Two former Bush administration officials and a small group of developers in Silicon Valley—coincidentally all immigrants—want to avoid the possibility of third-party voters ushering in a Trump presidency. They’ve created a smartphone app that allows anti-Trumpers who aren’t Clinton fans to swap a third-party-candidate protest vote with the vote of someone in a safely blue state.

“If you like Gary Johnson and want to vote for Gary Johnson, then you should vote for Gary Johnson,” says John Stubbs, co-founder of R4C16, a grassroots Republicans for Clinton group, which had the idea for a vote-trading app. “If, however, you do not like Donald Trump, and you are voting for Johnson because you also do not like Hillary Clinton, our suggestion is to vote tactically and avoid the worst-case scenario, which is the election of Donald Trump.”

Stubbs, along with his R4C16 co-founder Ricardo Reyes, both worked for the US Trade Representative under the Bush administration and, until this election, had retired from politics. In June, however, the lifelong Republicans launched R4C16 to defeat Trump, who they worry could destroy the Republican Party for good.

“A Libertarian protest vote could toss the election to Trump,” Stubbs wrote in the Washington Post in July. So Stubbs and Reyes came up with the idea for a vote-trading app, after reading about a couple of developers in Silicon Valley who’d made #NeverTrump, an app designed to help people encourage their existing contacts in swing states to vote. They got in touch with Amit Kumar, the brains behind the app and CEO of Trimian, a startup he launched in 2015 that makes mobile apps for communities, and asked if he could update the app to include a vote-trade option.

Kumar was happy to oblige. “Most of the people at our company are immigrants. So we felt like it was a good use of our time to come in and do what we can,” said Kumar, who came to Silicon Valley from India in 2000 and recently became a US citizen. The rest of his US-based employees, he says, come from places like South Africa, the United Kingdom, the Philippines, and China.

“Most of the people at our company are immigrants. So we felt like it was a good use of our time to come in and do what we can.”

Kumar explained that his team of developers had the idea for the first version of the #NeverTrump app a few weeks after this summer’s Republican and Democratic conventions and launched it in mid-September. Instead of knocking on random doors or cold-calling voters in get-out-the vote efforts, they wanted to mobilize voters with technology and within their existing networks. They worked pro-bono to create an app that, with a user’s permission, will sort through the contacts in your smartphone and list them by swing state. Users could then be enabled to send a pre-programmed email encouraging those friends to vote. After Stubbs and Reyes reached out, Kumar and his team quickly programmed in a vote-trading function that appears automatically based on the location and vote preference the user lists when he or she registers.

“We’ve made it very simple. If you happen to be a Clinton supporter in a non-swing state,” Kumar says, or a third-party candidate supporter in a swing state, “you now get a second button, which is ‘trade.'” Then, the pre-programmed message sending contacts a reminder to vote also includes an offer to swap votes.

Stubbs and Reyes wrote a New York Times op-ed earlier this month encouraging anti-Trump voters to consider trading their protest votes. They point out that in 2000, “Nader Trader” websites emerged a couple of weeks before the election but did nothing to change the outcome. Stubbs believes that this time around, however, vote-trading could have a significant impact because the internet is far more developed and ubiquitous, they’ve begun the effort two months in advance and, most importantly, this is no longer a brand new idea.

“In 2000, there’d been no discussion of it ever before,” Stubbs says. “There is an educational process that has to happen for voters.”

Vote trading has also caught on in other countries. In Canada’s 2015 election, a number of vote-swapping efforts emerged, and in the run-up to the election, more than a million citizens ditched their party affiliation with the democratic-socialist National Democratic Party to vote with the Liberal Party, helping to elect Justin Trudeau.

The app has also sparked at least a few vote-trading initiatives that are less tech savvy. Mary Cybulski, a photographer in New York, read Stubbs’ op-ed and decided to start an informal vote trade of her own with the help of her daughter, who is in a Ph.D. program in North Carolina, where polls are currently split between Trump and Clinton. “She has a lot of friends who are like, ‘I can’t vote for Clinton, but I don’t want to elect Trump,'” Cybulski says. So her daughter is looking for potential third-party voters in North Carolina while Cybulski connects them to potential swap-ees in New York. “I’m fine with protesting, I just don’t want to take chances, so we can help with that,” Cybulski says. “We can register their protest vote and not elect Trump.” For now, though, they’ve only found a couple of participants.

The #NeverTrump app has seen much wider success. Kumar says the app has had “tens of thousands” of downloads, and he anticipates a pickup in both downloads and trading as the election nears. As long as his investors and team continue to be supportive, he says his company will continue to maintain and update the app, motivated in large part by Trump’s anti-immigrant rhetoric.

“I’ve been in the Valley since 2000. And the first time I ever heard a racist taunt was a week back,“ Kumar says. “Trump has given society the permission to be racist. As an Indian American—we aren’t Muslims, but we see what he says about Muslims. We’re not Mexicans, but we see what he says about Mexicans. It’s up to us, as subcommunities, to stand up. And the way I think about it is, whichever community you belong to, if you think this is not about you, well guess what? It is going to be.”