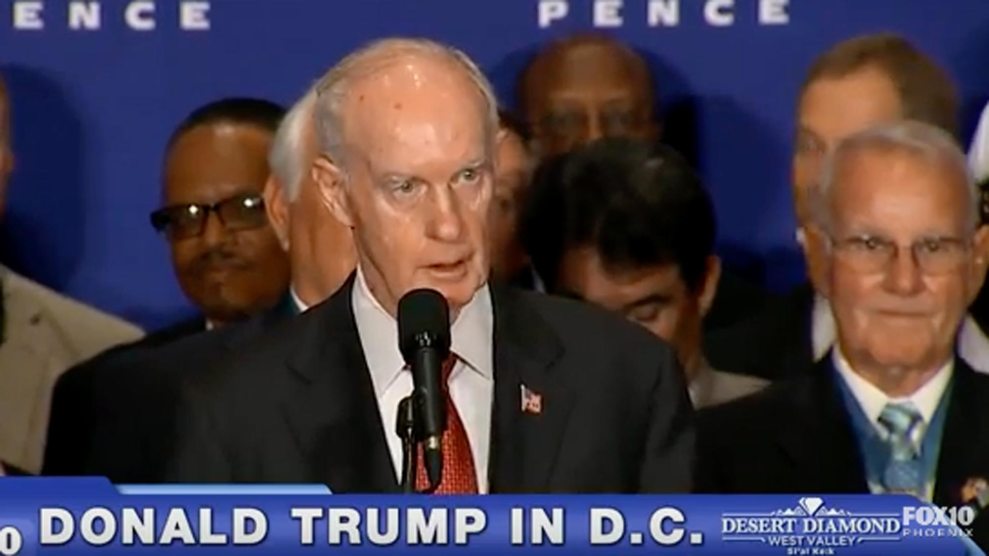 Republican presidential nominee Donald Trump gave a speech at his newly opened eponymous Washington, DC, hotel today in which he acknowledged that President Barack Obama was indeed born in the United States. In his three-sentence statement, he falsely accused Hillary Clinton of starting the birther movement and lied about his own role in ending it. “Hillary Clinton and her campaign of 2008 started the birther controversy,” Trump said. “I finished it.”

Trump also didn’t mention that he has stoked conspiracy theories for years about Obama’s birth certificate, raising questions about its authenticity and peddling the idea that the president was, in fact, born in Kenya.

While Trump may have backed off his long-held position today, one of the people he shared the stage with has himself promoted birther conspiracies: Thomas McInerney, a retired lieutenant general of the Air Force and a Fox News military analyst who introduced Trump at the event.

In 2010, McInerney filed an affidavit in support of an army officer who was awaiting trial for refusing to obey orders from his commanding officers until Obama produced his long-form birth certificate. McInerney said in the affidavit he has “widespread and legitimate concerns that the President is constitutionally ineligible to hold office.”

In the 2008 presidential campaign, Obama released his birth certificate, but that did little to stop the conspiracy theorists’ calls for Obama to release the long-form version of the document.

The officer in question in the 2010 case, Lieutenant Colonel Terrence Lakin, had refused to show up for duty in Afghanistan and was subsequently charged with disobeying orders. McInerney filed his affidavit in support of Lakin’s attorneys’ request for discovery, which sought Obama’s “birth records” in Hawaii. McInerney explained that the request for records was essential for the functioning of the military, and the officer’s “request for discovery relating to the President’s birth records in Hawaii is absolutely essential to determining…once and for all for this President whether his service as Commander in Chief is Constitutionally proper.”

McInerney continued in the affidavit: “He is the one single person in the Chain of Command that the Constitution demands proof of natural born citizenship. This determination is fundamental to our Republic, where civilian control over the military is the rule. According to the Constitution, the Commander is Chief must now, in the face of serious—and widely-held—concerns that he is ineligible, either voluntarily establish his eligibility by authorizing release of his birth records or this court must authorize their discovery. The invasion of his privacy is utterly trivial compared to the issues at stake here.”

At the hotel event today, McInerney didn’t mention anything about Obama’s birth certificates, instead praising Trump’s plans to expand defense spending. “There is only one candidate that can rebuild the United States military,” he said, “and make us great again.”