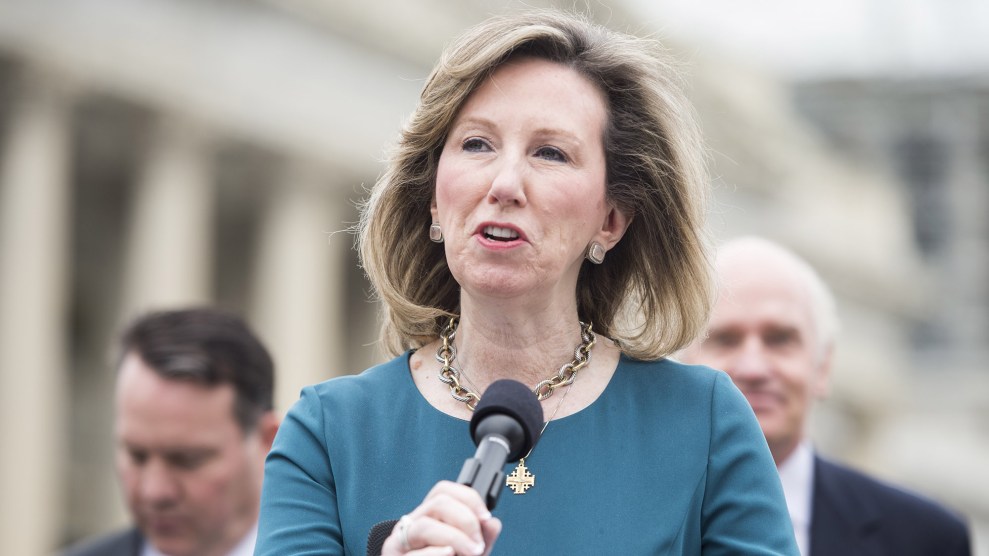 Rep. Barbara Comstock (R-Va.) owes her political career to the Clintons—specifically, to her efforts to tear them down. As a Republican Capitol Hill aide in the 1990s, she was the most prominent researcher hunting for dirt that could oust them from the White House, from Whitewater to the Monica Lewinsky scandals.

So now that Comstock is running for reelection to Congress in her northern Virginia district at the same time that Hillary Clinton is seeking the presidency, you might think Comstock would seize the chance to use her decade of Clinton antagonism to craft a message aligned with Donald Trump’s campaign in opposition to Clinton. Yet in a debate last week, she didn’t mention Trump’s name once and seemed to want her constituents to forget that there was a presidential contest happening at all. A day later, Comstock urged Trump to drop out of the race, following the release of a video showing him describing his penchant for sexually assaulting women. “I cannot in good conscience vote for Donald Trump,” she said, but staying true to her roots, she added, “and I would never vote for Hillary Clinton.”

As Republicans in moderate states and districts across the country grapple with how to run alongside the controversial figure at the top of the Republican ticket, few must be as anguished as Comstock. Clinton has maintained a solid lead over Trump in Virginia, and Comstock, locked in a close race in her swing district, has sought to distance herself from Trump—even as he runs against her old nemesis.

Comstock started her political career in the early 1990s, working for her local Republican congressman, Frank Wolf. Wolf tasked her with investigating whether the Clintons had broken the law by firing workers in the White House travel office, and she embarked on the opposition research work that would come to define her career. In 1995, she became the primary investigator on the House Committee on Government Reform, where her boss, Rep. Dan Burton of Indiana, gained notoriety for shooting a pumpkin (or possibly a watermelon or cantaloupe) in an effort to recreate Clinton administration staffer Vince Foster’s death and show that it must have been a murder. (The death was ruled a suicide, but right-wing conspiracy theorists continue to insist that the Clintons had him killed.)

Comstock soon became the most influential digger on the minutiae of Clinton history that would form the core of the scandals and nonscandals of the 1990s: Travelgate, Whitewater, the Lewinsky affair. In a 2001 profile calling her a “one-woman wrecking crew,” the Washington Post labeled her the prime behind-the-scenes driver of the scandals, writing, “Comstock has perhaps done more than any other GOP operative to skewer Bill Clinton, Al Gore and their congressional allies.”

Finding fault with the Clintons became Comstock’s all-consuming passion, as Clinton antagonist-turned-ally David Brock recounted in his apologia Blinded by the Right. “She often telephoned with the latest tidbit she had dug up in the thousands and thousands of pages of administration records she pored through frantically, as if she were looking for a winning lottery ticket she had somehow mislaid,” Brock wrote. Comstock would work overnight in the office, guarding the locked office to make sure no one—not even the cleaning crew—could get in to see what she and her colleagues were up to.

When Comstock first ran for Congress in 2014, Politico proclaimed that a “Clinton nemesis returns.” While many staffers-turned-candidates tend to downplay their time in the political machinery, Comstock touted her tenure as the GOP’s chief opposition researcher. She boasted of her sleuthing skills and promised she’d bring the same muckracking zeal to Congress in order to investigate Clinton, and particularly the Benghazi controversy.

This time around, Comstock’s ties to the Republican Party aren’t quite so sturdy. Throughout the presidential primary, Comstock backed Sen. Marco Rubio (R-Fla.) and didn’t shy away from attacking Trump. In December, after Trump announced his plan to ban Muslim immigrants, Comstock ripped into her fellow Republican. “It’s unconstitutional, it’s un-American, and religion is something that’s internal—it’s nothing that you necessarily wear on your sleeve,” she said during a radio interview. “There can be French citizens who have converted to the Muslim faith, and how is he going to ban them? It is a silly idea, and it makes no sense.”

In March, Comstock donated $3,000 in campaign contributions she’d received from Trump to wounded-veteran centers in her district. Rubio ended his campaign in March, but Comstock didn’t stop attacking Trump, telling the Loudoun Times-Mirror, a local paper in her district, that Trump “doesn’t know anything about the economy,” and she mocked him for building his company on inherited money from his father. In June, she called Trump’s attack on a Mexican American judge “abhorrent and indefensible.”

Prior to the mass exodus of Trump support that she joined over the weekend, the closest she had come to stating her preference in the current presidential contest came in a May interview with the Washington Post. “I can’t support Hillary Clinton, and I won’t be, but Donald Trump needs to earn the votes of me and many others,” she said. She seemed to think Trump had a lot more earning to do. “I can’t defend—I won’t defend a lot of the things he’s said,” she said.

Comstock’s hesitation throughout the year to embrace the Republican presidential candidate is probably a wise political calculation. Larry Sabato, a University of Virginia political scientist and election forecaster, includes Comstock’s race in his list of competitive elections; he gives it a “leans Republican” label. Comstock’s Northern Virginia district is anchored by Loudoun County, a historically Republican area that has trended more Democratic in recent elections. George W. Bush won it both times he ran for president, but so did Barack Obama. It’s one of the richest counties in the country, home to many commuters to nearby Washington, DC. But when Trump campaigned there this summer, he mistakenly painted it as a Rust Belt town that had been decimated by the flight of manufacturing.

Although Comstock has publicly avoided any association with Trump, she’s still benefited from joint fundraising efforts with the presidential candidate. Comstock’s Democratic opponent, newcomer LuAnn Bennett, has been eager to tie Comstock to Trump. During the Republican National Convention, Bennett ran web ads to highlight areas where the two Republicans overlap, including their attacks on Planned Parenthood and undocumented workers.

At last Thursday’s debate, Comstock did mention Clinton. “The trillion-dollar tax plan that Hillary Clinton would put forward and that my opponent supports would kill the small businesses,” she said. But she avoided discussing Trump at all.

Bennett had no such compunctions. “Barbara Comstock stands for Donald Trump,” she said. “Trump’s extreme agenda would cripple our economy, jeopardize our security, punish women for making their own health care decisions and, worst of all, the Trump agenda deeply divides our country.”

Correction: An earlier version of this article misspelled the last name of Comstock’s opponent.