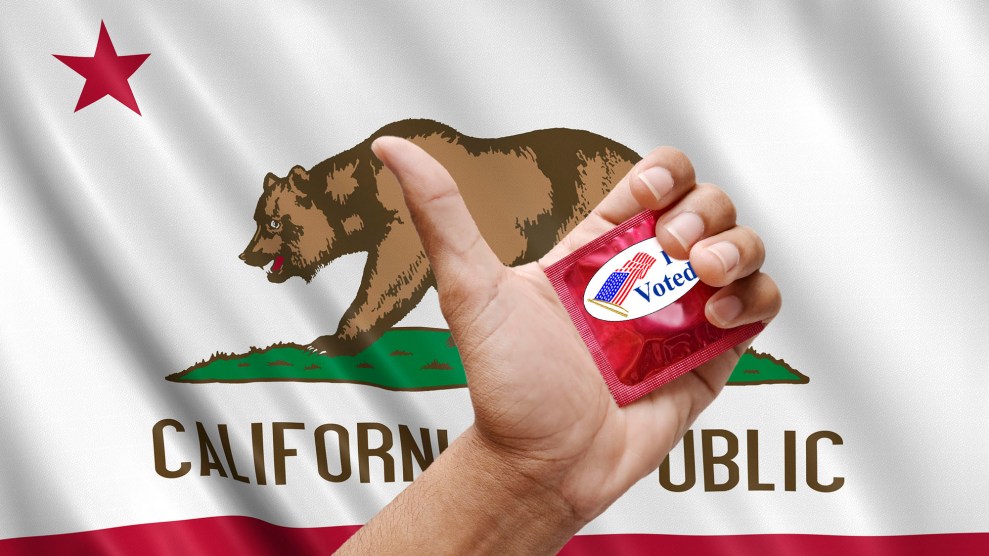 Prop. 60 aims to fight the spread of sexually transmitted infections by adding the Safer Sex in the Adult Film Industry Act to state law. While California has required porn stars to wear condoms since 1992, the proposition ramps up enforcement by permitting state residents to file a complaint about performers not wearing condoms with the California Occupational Safety and Health Administration. Cal-OSHA would then have three weeks to respond before those residents could sue anyone with a financial interest in the production and, if the court rules against the pornographers, collect a quarter of the penalties. The proposition also requires producers to obtain state health licenses, register shoots with the state, and pay for performers’ STI testing.

The list of Prop. 60 opponents is formidable. Democrats don’t like it because of the potential for lawsuits that could compromise worker privacy. Republicans don’t like the cost: about $1 million in state expenses to license and regulate film production, and an additional several million dollars in lost taxes if the industry flees California, according to a state analysis. AIDS Project Los Angeles slammed the measure for its condoms-only approach, which “completely ignores recent developments in HIV biomedical prevention,” such as pre-exposure prophylaxis (PrEP)—a position taken by multiple AIDS groups. Newspaper editorial boards think it’s poorly written. And the porn industry has spoken out loudly against Prop. 60, claiming that its lawsuits would leave workers vulnerable to harassment from overzealous fans, anti-porn crusaders, and stalkers, to whom actors are especially vulnerable.

“Many young people get their sex education from performers. They get the message that the only kind of sex is unsafe.”

On the other side is the AIDS Healthcare Foundation, the world’s largest AIDS NGO, a 630,000-patient, 36-country behemoth with a $1.3 billion budget. Over the past decade, AHF’s president, Michael Weinstein, has become a gadfly to adult-film insiders due to his repeated attempts to impose safe-sex regulations on the industry. Now, after drafting a condoms-in-porn state bill that died in committee and failing to convince a Cal-OSHA supervisory board to adopt regulations over the objections of workers, AHF is appealing to the popular vote.

It’s a strategy that’s worked well in the past for Weinstein, who sees a larger public health significance to the condom question. “Many young people get their sex education from performers,” Weinstein said in an August interview with Mother Jones. “They get the message that the only kind of sex is unsafe.”

Now, four years after Measure B, AHF is presenting a similar—and stricter—proposal to the rest of the state. So far, the foundation has shelled out about $4.4 million to promote Prop. 60. (For comparison, opponents have raised around $433,000.) This isn’t AHF’s only fight on the ballot—the group is also staring down the pharmaceutical industry with a proposition to tie Medi-Cal drug spending to Veterans Administration prices—but it’s a lonely one, with no other group contributing a cent to the “Yes on Prop 60” PAC.

Lonely, except for support among 55 percent of registered California voters, according to a University of Southern California Dornsife/Los Angeles Times poll last month.

“There’s a lot of things that the proponents didn’t consider in terms of what it’s really like to do the work right now. If you’re an individual performer, you have to have a lot of video.”

“I don’t know a single active performer who is for this,” Lee says. And while Lee adds that some performers are genuinely concerned about harassment and stalking, the main issue for others is comfort—and chafing. Once, while shooting a scene, Lee’s male co-star got an abrasion and began to bleed. That’s what comes from having porn-duration sex with a condom—and according to Lee, it gets worse when actors shoot several scenes a week. “There’s a lot of things that the proponents didn’t consider in terms of what it’s really like to do the work right now,” Lee said. “If you’re an individual performer, you have to have a lot of video.”