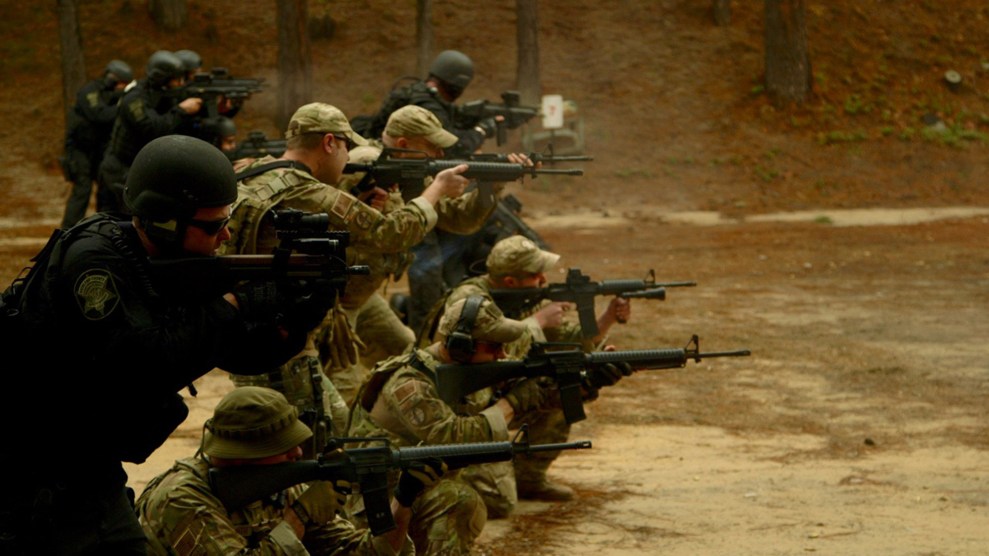 The SWAT members exit their armored vehicle in sprint, rushing a house in a residential neighborhood in Richland County, South Carolina, wearing full tactical gear and with their weapons drawn. They smash the home’s windows as they force their way inside the home. The family comes out looking dazed, some in handcuffs. A baby sits in his mother’s lap in the yard. After a long search, one of the officers says as he rifles through a car in the driveway, “There’s gotta be some drugs here…Where the fuck is the weed?”

Eventually, the sheriffs arrest the homeowner’s son and take him to jail after finding a gram and a half of loose marijuana at the bottom of a book bag. Then they seize $873 from him, money he tells the officers is for his landscaping business. It’s money he’ll never see again.

“Can you do shit like that?” the owner asks after his son is in handcuffs.

“And we gotta pay for the fucking windows? That don’t matter?”

The officer just nods and walks away.

This is one of many disturbing scenes in Do Not Resist, a new documentary that dives deep into just how far the militarization of America’s police forces has gone, and the problems caused when police deploy military-style equipment and tactics on routine searches and non-violent situations.

“We filmed with 18 departments over three years. Almost 10 times out of 10, the call-outs would require officers to de-escalate the situation, and you could see that the officers were wholly unequipped in de-escalation,” says Craig Atkinson, the film’s director. “But the moment the situation called for violence or some form of aggression, they were very very prepared.”

According to the film, there was an average of 3,000 SWAT deployments a year in the 1980s. Today it’s somewhere to between 50,000 and 80,000 a year. Meanwhile, police departments across the nation are being supplied with Mine-Resistant Ambush Protected (MRAP) armored vehicles and Humvees, military-grade assault rifles, and even bayonets. Since 9/11, the Department of Homeland Security has given police departments $34 billion to purchase this kind of equipment, and the Department of Defense has contributed $5 billion in free military goodies. According to Atkinson, there are literally miles of MRAPs parked in Texas waiting to be sent to law enforcement agencies.

In Do Not Resist, a quietly devastating film that won Best Documentary Feature at this year’s Tribeca Film Festival, we visit small towns that experience almost no violence yet still receive equipment designed for warfare. Why? Because, as FBI Director James Comey put it at the 2014 International Police Chiefs convention, “Monsters are real,” and you never know when or where they’ll strike. We peek inside a training seminar from Dave Grossman, one of America’s most prominent law enforcement trainers, who teaches police that the answer to the violence they confront is “superior violence, righteous violence.” We meet SWAT leaders who train their teams for all kinds of unlikely situations, including “anything dealing with ISIS.”

While this equipment and tactics are supposedly meant to handle active shooters and terrorists, they’re used against the very communities the police serve—particularly communities of color. “You’re not doing 200 raids a year all over the county, you’re doing it in one geographic area of the city, and we all know which area of the city that is,” says Atkinson. “It’s the low-income, people of color, the same communities who have taken the brunt of this for years and years.”

I spoke with Atkinson about his film, which he spent three years of filming.

Mother Jones: Let’s talk about the SWAT team leader who says he is preparing for everything, including an ISIS situation…in South Carolina. Where is this coming from? Is that the level of thinking you found in many of these ride-alongs and interviews?

Craig Atkinson: SWAT and police officers always bring it back to the North Hollywood shootout in the ’90s, where you had two individuals who donned body armor and held a bank up. The police were so ill-equipped they had to go to a gun store to buy rifles that could take these guys out. Every law enforcement officer you meet takes you back to that day. And now, if it’s not Al Qaeda, ISIS is en vogue. When that guy said that to us—”Now we’re preparing for ISIS”—it was laugh-out-loud hysterical because at the time, ISIS was brand new.

“The officers were wholly unequipped in de-escalation. But the moment the situation called for violence or some form of aggression, they were very very prepared.”

MJ: What are some scenarios in which this equipment is justified?

CA: The SWAT teams used the protective equipment to great effect during the Pulse nightclub shooting, where they used the vehicles to puncture a hole in the side of the building and free hostages. Well, let’s keep it for those situations. Don’t tell us you’re going to use it for those situations, and then turn around and raid homes three or four times a day. And at the end of the day you say, “Search warrants are 50/50.” You only find something 50 percent of the time? It creates such great ill will in these communities.

MJ: What happens with the money that gets seized during arrests like the one where the police only find a gram and a half of weed?

CA: That individual never saw that money again because it was seized through civil asset forfeiture, which states that your property is guilty until you prove it innocent. When you’ve given the tools of war to these departments, and then given them a direct financial incentive for when they use these tools, you’re creating a perfect scenario for unjust policing. The first thing that was said when we got back to the police station was, “Did we seize anything?”

MJ: You begin with and return to scenes from Ferguson, Missouri, throughout the film. What was your goal for structuring the film the way you did?

CA: The opening scene was the first night we showed up in Ferguson. It’s an anchoring scene when most people became aware of the issue of the militarization of police. It was an entry point that we could then start to unpack. How did we arrive at this point where we have a protest that is met with the full force of a SWAT team that’s been outfitted with military equipment?

MJ: This could have easily been a hit job on cops, but it doesn’t come off that way. It’s more a fly-on-the-wall experience.

CA: No one needs that in this day and age when we know that oftentimes, police officers are stuck in the middle. A lot of these young officers show up wanting to protect and serve, and then they’re given a top-down objective that completely puts them at odds with their community. Or they’re given the Dave Grossman philosophy early in their career and they base their career off of “You are men and women of violence.”

MJ: What surprised you about the way that police departments receive armored vehicles like MRAPs?

CA: They would require 80 hours of training before they would let military personnel drive one of these vehicles. And here you are in Juno County, Wisconsin, the guy basically drives one off the lot. And you find out that they’re 45,000 pounds and they happen to roll over a lot. There was an officer in California who was sent to go pick one of them up. No one told him that the max speed is 45 miles per hour. He’s driving 75 miles per hour on the freeway in an MRAP, and the heat alone caused the tires to explode because there’s so much friction. He goes into oncoming traffic. A man is unassumingly going down the other side of the highway and is hit head on by an MRAP. Totals his brand new truck. Luckily, no one dies.

“2014 was the first year that American citizens had more property seized from them through asset forfeiture than through burglary.”

MJ: Why would the DOD want to give away this equipment, sometimes new?

CA: I don’t think that they are just adding random new equipment so that they can give it away. I think we’ve overspent, we’ve over-ordered, and the more you spend this year the more you get the following year. There’s an incentive to keep buying and keep ordering. It’s fascinating to me that here I am in Ferguson trying to piece together why the community is so upset. There were plenty of people there to protest the Mike Brown shooting. But there was a massive community of folks just protesting the decades of mistreatment, of having to get ticketed in order to pay for the operating revenues of these cities. It begs the question: Why are these communities failing? Why is there no money for these communities? But then you go down to Texas and you see miles and miles of MRAPs costing the taxpayers $1.2 million a piece, and you start to understand why there’s no money in this country anymore. We’ve squandered it away.