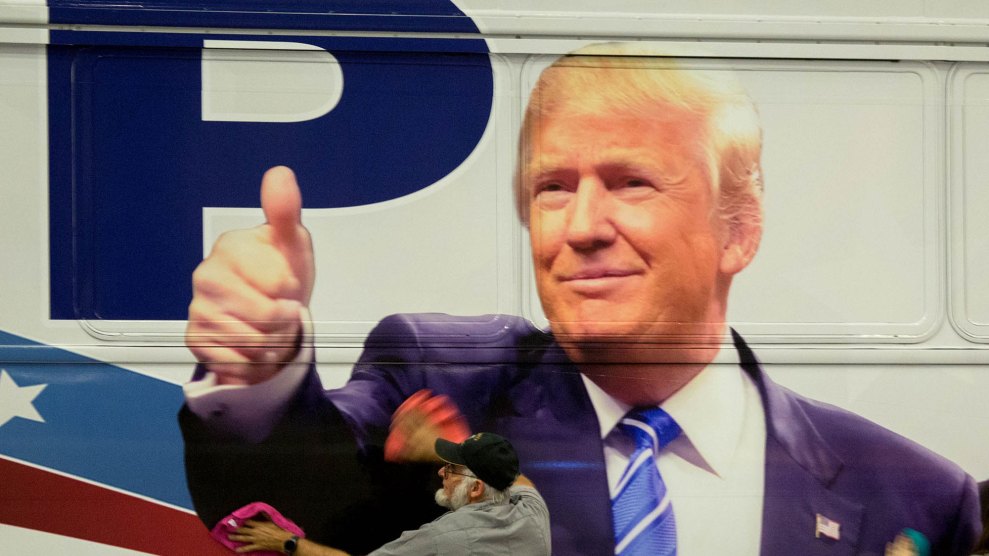 As the allegations of sexual assault piled up against Donald Trump this week, the Republican nominee promised that he would release a trove of exculpatory evidence “at the appropriate time.” On Friday morning, running mate Mike Pence said this other shoe would drop within “hours” and this information would disprove Trump’s accusers. By the end of the day, the only information that Trump produced was thin and bizarre.

The Trump campaign put forward a British man who claimed to have a “photographic memory” and who told the New York Post that he was on the flight with Trump and one of Trump’s accusers 30-plus years ago, that he remembered the entire incident, and that her story of being groped by Trump while sitting next to the mogul in the first class section was not true. The Brit claimed nothing had happened during the entire flight. (A Trump spokeswoman had previously claimed that Trump did not fly on commercial airlines during the 1980s, so this seemed to prove that Trump’s account was wrong.) The British fellow would have been about 18-years-old at the time and didn’t explain why he had been flying first-class. And two years ago, he generated British headlines by claiming that when he was 17 he procured young men for sex parties with British politicians. The Trump campaign also released a statement from the cousin of an accuser who had appeared on The Apprentice, and this man asserted that his cousin had for years not complained about Trump and had only raised these allegations after Trump recently declined an invitation to visit her restaurant.

None of this was the firm proof that Trump had promised. And this wasn’t the first time that Trump has vowed to release information and then failed to produce the goods. Here’s a quick guide:

Tax returns: At the height of his birther crusade in 2011, Trump offered a challenge to President Barack Obama: if the commander-in-chief released his long-form birth certificate, Trump would put out his tax returns. Obama did release a long-form birth certificate, after which point Trump told ABC that he would release his taxes “at the appropriate time.” That time never came.

Tax returns again: In January Trump said on Meet the Press that he would release his tax returns imminently. “We’re working on that now,” he said. “I have big returns, as you know, and I have everything all approved and very beautiful and we’ll be working that over in the next period of time.” But after a month passed and he still hadn’t produced his tax returns, Trump said at a Republican primary debate that he couldn’t release his tax returns because he was under audit. (The IRS has said that an audit would not prevent Trump from releasing the returns.) Running mate Mike Pence and top surrogate Ben Carson have both said Trump will release the returns at “the appropriate time.” Which brings us to…

Proof he’s being audited: Trump promised to release a letter proving that he was under audit. In March, in response to to repeated inquiries and promises to release documentation pertaining to the audit, Trump produced a letter from his lawyer (dated three weeks earlier) saying that his returns from 2009 until the present were under review by the IRS. But Trump’s lawyers are paid by Trump. He has not produced any correspondence from the IRS that would confirm an audit was under way.

List of creditors: When NBC News’ Lester Holt asked Trump at the first presidential debate why he had not released his tax returns, Trump made a counteroffer: he would release a list of his creditors instead. “I could give you a list of banks,” he said. “I would—if that would help you, I would give you a list of banks. These are very fine institutions, very fine banks. I could do that very quickly.” Three weeks later, though, Trump has still not released that list.

Secret information in Hawaii: In 2011 Trump claimed to have sent investigators to Hawaii to uncover the truth about Obama’s birth certificate, and he said he would release the results of their investigation “at a certain point in time.” No grand announcement ever came. “He’ll reveal it when the time is right,” Tana Goertz, the co-chair of Trump campaign’s in Iowa, told MSNBC last summer. “If they found something, it will come out. The time isn’t right, and guess what? Mr. Trump does what he wants and he’s not going to do it on our time. He’s going to do it when the timing is perfectly strategic and it’s not now and it wasn’t the place for him to say it.”

Melania’s immigration documents: Following reports that Melania Trump had (illegally) worked in the United States under a tourist visa in the 1990s, Trump vowed to hold a press conference featuring his wife to set the record straight. No press conference ever occurred. Weeks later, the Trump campaign released a statement from her lawyer, but it was accompanied by no corroborating documents.

Medical records: In September, as Trump was claiming that Hillary Clinton was in poor health, ABC’ News’ David Muir asked why he didn’t release his own medical records. “I might do that, I might do that,” Trump said. “In fact, now that you ask, I think I will do that. I’d love to give full reports.” Trump had previously released a one-page letter from his gastroenterologist that was widely dismissed by medical experts as odd and unprofessional, and he later revealed additional medical details (from the same doctor) on Dr. Oz’s television show. But Trump has yet to produce a full medical report.