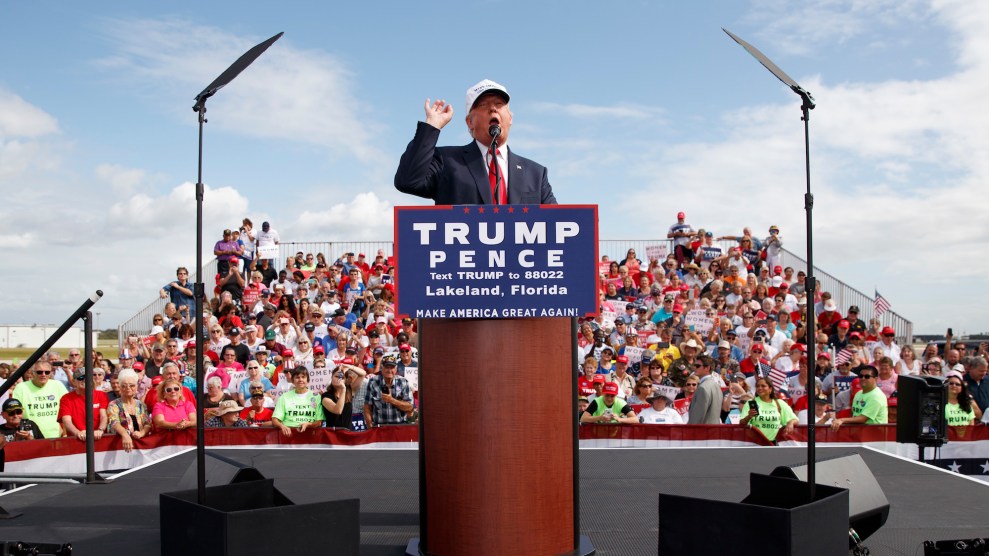 After Donald Trump called for Hillary Clinton to be jailed during Sunday’s presidential debate, some Trump surrogates suggested he was simply joking, and his running mate Mike Pence said his remarks had been taken out of context. But at a Wednesday rally in Lakeland, Florida, Trump promised that no, he really did intend to throw Hillary Clinton in prison if elected—and to prosecute her lawyers for good measure.

In his afternoon speech outside an airplane hangar off I-4 in the center of the swing state, Trump offered his toughest words yet for the former secretary of state. “Hillary Clinton bleached and deleted 33,000 emails after a congressional subpoena,” he told the crowd. “So she gets the subpoena, she gets the subpoena, and after—not before, that would be bad—but after getting the subpoena to give over your emails and lots of other things, she deleted the emails. She. Has. To. Go. To. Jail.”

Trump didn’t stop there. He also wanted the people who advised her to delete the emails to be charged, arrested, and jailed. “And her law firm, which is a very big and powerful law firm, which is the one that said, ‘Oh, they’ll determine what they’re giving,’ those representatives within that law firm that did that, have to go to jail,” Trump said.

The rally was the third stop in a three-day swing through the Sunshine State, where Clinton has taken a small but steady lead during Trump’s October collapse. Supporters packed onto the tarmac to wait for Trump’s campaign plane to pull up, and some passed out from the heat before and during the event. When a woman who had collapsed earlier in his speech returned to the crowd to hear the ending, Trump praised her durability and took a shot at the National Football League’s concussion policy. “Uh! Uh!” he said. “A little ding in the head—you can’t play the rest of the season.”

The prospect of prosecuting Clinton was a through-line of the event. Trump supporters donned “Hillary for Prison” T-shirts, and one attendee wore black-and-white stripes with a Hillary mask. When Rep. Dennis Ross, a Florida Republican who spoke before the plane had arrived, was interrupted with a chant of “lock her up!”, he promised to help make it a reality. “When he becomes president, we’ll work on that,” Ross said.