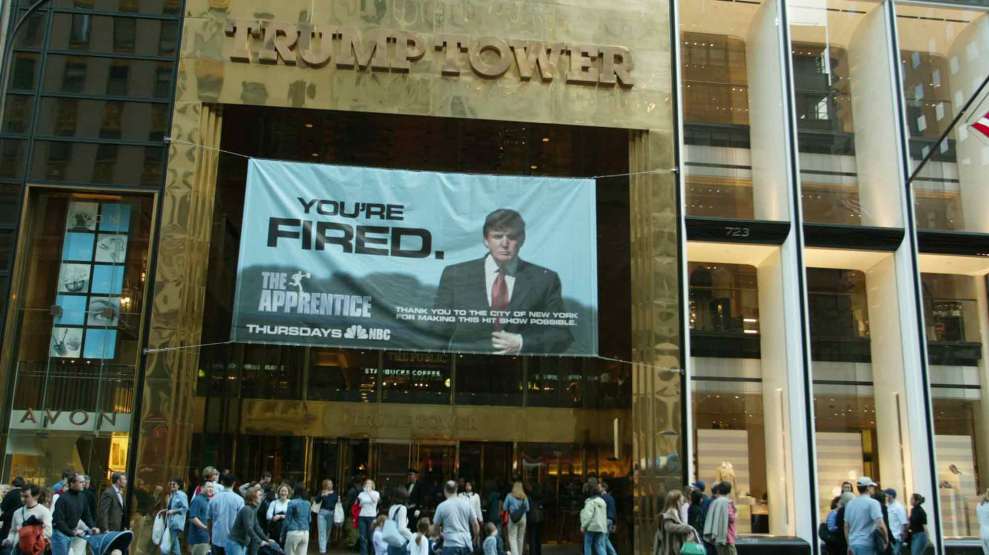 In 2009, the identity theft prevention company LifeLock was in trouble. The Federal Trade Commission and attorneys general in 35 states were investigating allegations that it was engaging in false and deceptive advertising practices and potentially exposing customers to the risk of identity theft because it was careless with their personal information. Class-action lawsuits against the company were piling up with similar allegations.

But that April, the beleaguered company got a major boost of positive publicity courtesy of Donald Trump, who featured LifeLock and its CEO Todd Davis on an episode of The Celebrity Apprentice in which contestants designed retail sales strategies for the outfit. In a press release announcing the LifeLock episode—titled “Donald Trump & LifeLock® Want to Protect Your Personal Information and Say ‘You’re Fired’ to Identity Theft”— Trump heaped praise on the company. “Todd Davis and my friends at LifeLock have created a revolutionary system to protect and secure your personal information. They are going on The Apprentice to let the country in on a well-kept secret—I advise you check out what they have to offer.”

LifeLock’s appearance on Trump’s reality show demonstrated a special kind of genius Trump had brought to network television. Traditional TV shows were supported by commercials and occasional product placement, but Trump had transformed The Apprentice into full-fledged infomercials, once bragging that the show had helped “revolutionize brand integration.”

For a hefty fee, which Ad Age estimated at between $5 million and $9 million, companies hoping to improve their reputations or extend their reach could get a jolt of exposure and positive PR by becoming the subject of a two-hour, prime-time episode of The Celebrity Apprentice. “There’s never been another show where you’ve had a product sold for two hours,” Trump explained to Ad Age in 2011. “They do a 30-second commercial, but where do they do two hours?”

Major companies, including GM and Walgreens, sponsored episodes, which reached millions of viewers. The format also made Celebrity Apprentice a useful venue for embattled outfits, such as LifeLock, that were seeking to rehabilitate their reputations while under fire from regulators and consumers for dubious practices. (The Trump campaign did not respond to questions from Mother Jones.)

LifeLock was co-founded by Robert J. Maynard in 2005. He came up with the idea for the company while sitting in an Arizona jail after being arrested for stiffing the Las Vegas Mirage Hotel on a $15,000 casino marker. (Maynard, who calls himself bipolar, wrote on his website that he has no memory of the episode that led to his arrest, but acknowledges it took place. “I don’t have a criminal record,” he noted. “I was never convicted of anything.”) Maynard had previously run a credit-repair business that was shut down by government regulators in the 1990s for engaging in “unfair and deceptive acts.” (In 2007, the Phoenix New Times revealed Maynard’s past in a lengthy feature story. Soon after, Maynard resigned from LifeLock.) According to a 2010 lawsuit by the Federal Trade Commission, the company did not offer the level of fraud protection it promised and in fact exposed consumers to possible identity theft because of its poorly secured databases containing sensitive customer information, including Social Security numbers.

Davis, the company’s CEO and co-founder, had his own identity stolen multiple times. Davis had starred in company ads in which his real Social Security number was splashed across the screen to prove how well LifeLock worked. Instead, lawyers who brought a 2008 class action against the company found that more than 20 driver’s licenses had been fraudulently obtained using Davis’ Social Security number. When questioned by reporters about various security breeches, Davis had to admit that someone had taken out a payday loan using his personal information.

On March 9, 2010, LifeLock agreed to pay $12 million to settle charges with the FTC and state attorneys general around the country that it had made false claims in advertising its services. “While LifeLock promised consumers complete protection against all types of identity theft, in truth, the protection it actually provided left enough holes that you could drive a truck through it,” FTC Chairman Jon Leibowitz said at the time.

Yet LifeLock’s dubious track record didn’t deter Trump from once more promoting the company. Two weeks after the FTC announced the settlement, LifeLock was again featured on The Celebrity Apprentice. This time the company was touting a new security product—with the help of disgraced Illinois Gov. Rod Blagojevich, who appeared as a contestant on the show while his criminal case was pending. “The episode,” Davis said in a press release, “is the perfect outlet to demonstrate to viewers how to help protect their good name.”

Apprentice viewers who were persuaded to buy LifeLock’s services might have ended up disappointed. Last year, the company agreed to pay $100 million to settle contempt charges with the FTC for failing to comply with the terms of its 2010 settlement agreement, under which the company promised to tighten security for customers’ personal information.

LifeLock did not respond to a request to comment, but in public statements it has asserted that no customer information was compromised.

LifeLock isn’t the only questionable company Trump promoted on The Celebrity Apprentice. Trump twice featured ACN, a multilevel marketing company with a record of regulatory run-ins in the United States and abroad. (Trump was also a longtime spokesman for ACN, which displayed the real estate mogul prominently on its website and paid him $450,000 for each of three speeches he gave to its salesforce.)

ACN’s history of running afoul of regulators dates back to 2001, when Pennsylvania’s public utility commission began investigating ACN’s energy subsidiary for “slamming,” or signing up customers for energy or phone services they never authorized. In 2002, the commission fined ACN $45,000. But complaints about the company’s business practices persisted.

In December 2008, a Fox News affiliate in Los Angeles aired a long investigation examining whether the company was effectively a pyramid scheme. The report suggested the firm was misleading people into paying to work for the company and alleged that most of ACN’s salespeople lost money working for ACN. (In the broadcast, ACN denied that it was a pyramid scheme and said it was simply offering a business opportunity and that not everyone would make money.)

A few months later, ACN executives appeared on The Celebrity Apprentice with Trump, who gave the company—and its new video phone—a positive spin. In a press release before the show aired, Trump gushed, “I’ve come to know Greg, Robert, Tony and Mike, the Co-Founders of ACN, very well. They have built a terrific company and their new ACN Video Phone is amazing. I simply can’t imagine anyone using this video phone and not loving it.” On the show he dubbed them, “Very successful, very good guys.”

Yet in 2010, the Montana securities commission issued a cease-and-desist order against ACN, alleging that it was operating a pyramid scheme. Eventually, the commission resolved its action against ACN after the company agreed to provide “additional training” to its independent sales representatives.

Despite a spate of bad press for the company resulting from the allegations in Montana, Trump again promoted the company in a Celebrity Apprentice episode in which contestants were tasked with marketing ACN’s video phone. (As the Wall Street Journal reported, Trump didn’t inform Apprentice viewers that sales of the phone were so poor that ACN’s supplier had been forced to slash 70 percent of its workforce shortly before the episode aired.)

The company declined to answer detailed questions from Mother Jones but said in a statement, “ACN had a business relationship with Donald Trump that began in 2006 and ended mutually when he announced his decision to pursue presidential candidacy.”

When the Wall Street Journal questioned Trump about his relationship with ACN last year, he claimed he had no knowledge of the company’s products or practices. “I’m not familiar with what they do or how they go about doing that,” he said. Still, he defended showcasing ACN on The Celebrity Apprentice. After all, he said, “They paid a lot of money to go on the show.”