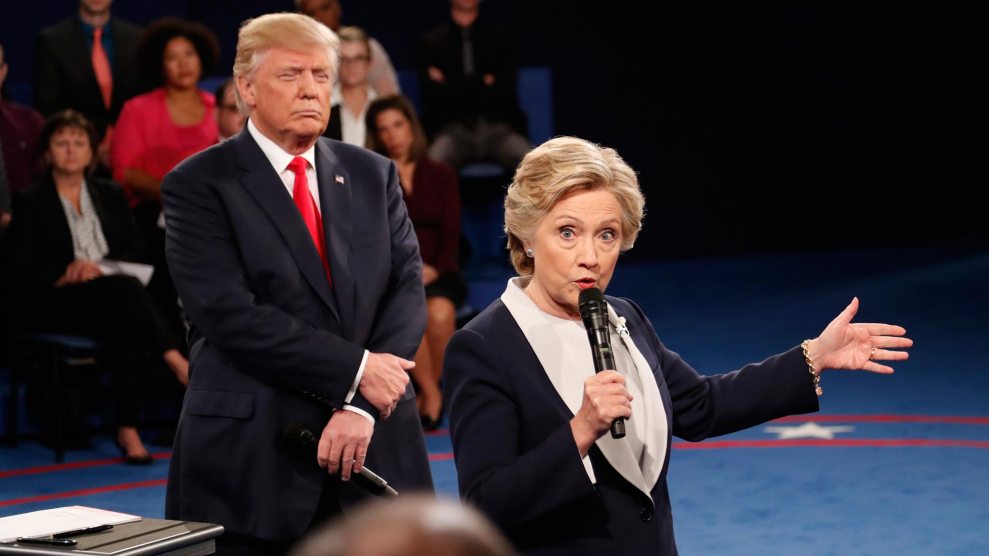 The presidential campaign descended into new levels of nastiness Sunday night, as Hillary Clinton and Donald Trump faced off in a tense debate full of verbal blows and allegations.

The debate in St. Louis, moderated by CNN’s Anderson Cooper and ABC’s Martha Raddatz, came just 48 hours after a 2005 tape revealed Trump bragging about sexually assaulting women. In the wake of that video, dozens of elected Republicans unendorsed Trump, leaving the GOP in a state of chaos over the weekend. It was at this point that Trump decided to go all-in on a plan he has hinted at for weeks—attacking Hillary Clinton over the accusations of sexual harassment and sexual assault leveled against her husband in the past. Just before Sunday’s debate, Trump held a press conference featuring three of Bill Clinton’s accusers and a fourth woman, whose alleged rapist Hillary Clinton represented decades ago as an attorney in Arkansas. All four women were in the audiences for the debate.

During the debate, which was structured as a town hall event, Trump continued discussing the sexual accusations against Bill Clinton. He called Hillary Clinton “the devil.” He even promised that as president he would prosecute her and that she would be “in jail.” Clinton, who was calmer than Trump throughout the debate, criticized her opponent’s treatment of women, minorities, and the disabled and said he was not fit to be president.

Here are the night’s biggest moments:

Near the beginning of the debate, Cooper asked Trump to respond to a firestorm surrounding the 2005 video—and the moderator didn’t mince words about what Trump had said. “That is sexual assault,” Cooper pointed out. “You bragged that you have sexually assaulted women.”

Trump denied he had bragged about engaging in sexual assault. “Yes, I am very embarrassed by it, I hate it,” Trump said. “But it’s locker room talk.” And that was all he wanted to say about it, quickly attempting to change the subject to the fight against ISIS. Cooper wouldn’t let Trump slip away quite that easily, repeatedly pressing Trump on whether he had ever actually grabbed women’s genitals without their consent. Trump eventually denied that he had committed sexual assault. “No, I have not,” Trump said, before changing the subject again. “I will tell you that I’m going to make our country safe.”

Given the chance to address the Trump video, Clinton said Trump was unlike past Republicans presidential nominees. Clinton said that she had disagreed with the policy positions of those candidates but that Trump was unique in that he couldn’t be trusted with the office of the presidency.

And she wasn’t buying Trump’s defense of his 2005 comments. “I think it’s clear to anyone who heard it that it represents exactly what he is,” she said. “Because we’ve seen this throughout the campaign. We have seen him insult women. We’ve seen him rate women on their appearance. Ranking them from 1 to 10. We’ve seen him embarrass women on TV and on Twitter. We saw him after the first debate spend nearly a week denigrating a former Miss Universe in the harshest, most personal terms. So, yes, this is who Donald Trump is.”

Trump had been hinting at it for days, and when pressed about his videotaped comments bragging about sexual assault, Trump brought up the sexual scandals that have been swirling around Bill Clinton for decades. “If you look at Bill Clinton, far worse. Mine are words, his was action,” Trump said. “This is what he has done to women. There’s never been anybody in the history of politics in this nation that’s been so abusive to women. So you can say any way you want to say it, but Bill Clinton was abusive to women.”

Hillary Clinton didn’t take the bait, though. “Instead of answering people’s questions, laying out the plans we have that make a better life and a better country,” she said. “That’s his choice. When I hear something like that, I am reminded of what my friend, Michelle Obama, advised us all: ‘When they go low, you go high.'”

Trump promises to prosecute Hillary Clinton—and says that if he becomes president, She’ll go to jail

In the middle of a rambling response early in the debate after Clinton criticized Trump’s birther conspiracy theories, Trump pivoted to talking about Clinton’s deleted emails from her time at the State Department. Clinton has claimed these were personal correspondences, but Trump disputes that—and he vowed that if he wins the White House, Clinton will be prosecuted. “If I win, I am going to instruct my attorney general to get a special prosecutor to look into your situation,” Trump said. Trump turned to Clinton and pointed right at her. “It’s a disgrace, and honestly, you ought to be ashamed.”

“It’s just awfully good that someone with the temperament of Donald Trump is not in charge of the law of our country,” replied Clinton.

“Because you’d be in jail,” Trump shot back.

Just to recap: One candidate is threatening to throw the other candidate in jail if he wins. This is happening in the United States.

In a long attack on Clinton, Trump accused her of conspiring with the Democratic National Committee to somehow cheat in the primary campaign against Bernie Sanders. He then said he was surprised that Sanders would now endorse Clinton—or, as Trump put it, that Sanders would “sign on with the devil.”

Trump isn’t sure there has been any hacking

In an election cycle repeatedly roiled by the release of hacked, private communications—and a few days after the US government officially accused Russia of trying to influence the outcome of the election by hacking the Democratic National Committee and other organizations—Trump wondered whether any hacking had taken place at all. “I notice anytime anything wrong happens, they like to say the Russians—she doesn’t know if it’s the Russians doing the hacking,” he said. “Maybe there is no hacking. But they always blame Russia, and the reason is because they think they’re trying to tarnish me with Russia.”

Trump reprised a line of attack from the first debate, claiming that Clinton has nothing to show for her 30 years in public life. In particular, he claimed she had never lifted a finger to improve health care in America. “She’s been talking about health care—why didn’t she do anything about it?” he said. “She doesn’t do anything about anything other than talk. With her, it’s all talk, no action.” In response, Clinton gave a CliffsNotes version of her record, including her work on health care issues.

Trump broke with his running mate on the question of how to deal with Russia’s involvement in the Syrian war. Raddatz quoted Mike Pence’s statement from the vice presidential debate, in which the Indiana governor said, “Provocations by Russia need to be met with American strength, and if Russia [continues] to be involved in this barbaric attack on civilians in Aleppo, the United States of America should be prepared to use military force to strike military targets of the Assad regime.”

Trump claims Clinton “has tremendous hate in her heart”

Trump attacked Clinton for her comments, made during a fundraiser, that many of his supporters are deplorable. “She has tremendous hate in her heart,” Trump said. “When she said ‘deplorable,’ she meant it.”

Clinton made sure to needle Trump about the recent New York Times report that the GOP candidate may have avoided paying federal income taxes for nearly two decades. When the debate moderators pushed Trump to clarify whether he’d been paying federal income tax, Trump ducked and dodged and appeared to suggest that he had paid other types of federal taxes. After being asked explicitly if he could recall which years he didn’t pay income taxes, Trump said: “No, but I pay tax and pay federal tax, too. But I have a write-off, a lot of it is depreciation, which is a wonderful charge.”