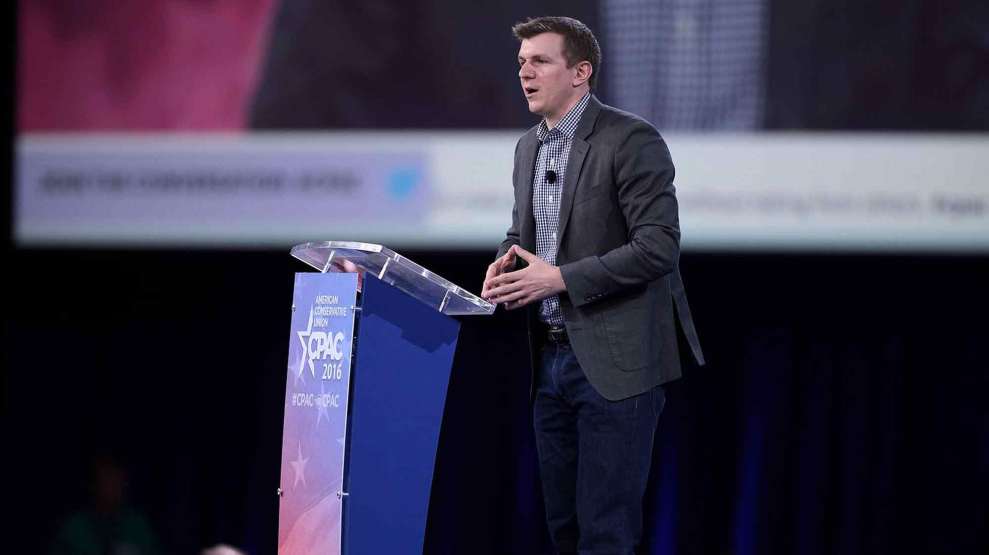 James O’Keefe is at it again. The conservative video maker often accused of selective editing and once arrested and convicted for an undercover caper at a senator’s office, has released a new series of videos targeting a few Democratic and progressive organizers. His operatives pretended to be interested in funding Democratic political activities and secretly recorded the Democratic activists; the videos O’Keefe released have become a cause célèbre for conservatives, including Donald Trump, who claim they show Ds engaged in dirty tricks. Of course, there are questions about the editing of the tapes. And on Wednesday night, O’Keefe released another hidden-camera video showing one of these Democratic activists talking about the Mitt Romney 47 percent story I broke in 2012. The supposed scoop: The video of Romney dismissing half the nation as irresponsible freeloaders was somehow the result of covert Democratic machinations. The truth: It wasn’t.

This O’Keefe video featured Scott Foval, who was the national field director of Americans United For Change, a progressive organization, until an earlier O’Keefe video led to his firing. Talking about bird-dogging—a common practice in which political groups send people to campaign events for candidates they oppose to ask questions or protest—Foval noted that Democratic bird-doggers “negotiated to get that lawyer in in Florida who recorded the 47 percent.” “Wait,” the covert O’Keefe comrade said, “I thought that was a bartender.” And as the world knows now, it was a bartender named Scott Prouty who had recorded that Romney fundraiser in Boca Raton and eventually shared the video with Mother Jones after I tracked him down.

No, Foval said, “the lawyer took his phone and had the bartender walk around with it and set it up.” He went on: “It was a whole coordinated operation to get the phone in because they had taken away all the cellphones from all the staff.”

Foval had it wrong. Prouty tells me this account is “nonsense” and “fiction.” (After keeping his identity a secret for months after the 47 percent video came out, Prouty told his story here.) No lawyer or network of Democratic schemers were involved in sneaking in a recording device to the $50,000-a-plate fundraiser at hedge fund manager Marc Leder’s house to obtain the footage. The video was not shot with a cellphone. Prouty, who was working for the caterer, used a camera he had brought to the event. He was flying solo and not part of any Democratic conspiracy to capture Romney saying what he actually said.

Yet O’Keefe and other conservatives now claim they have the real story behind the story. What happened? I reached Foval, who I didn’t know before, and spoke to him today. He had left his Wisconsin home after receiving numerous death threats. Referring to this latest video, he said, “What I said wasn’t accurate.” He explained that he had conflated two events. He noted that he had once heard a secondhand story from a donor about how some Democratic activists had infiltrated a campaign event by having a lawyer with an invitation bring in a cellphone—and he had mixed this up with the 47 percent episode. “I was being too confident” in talking about it, he said, remarking that he had been trying to impress the O’Keefe operatives. At the time of the 47 percent fundraiser, Foval noted, he was working for People For the American Way and would have had nothing to do with infiltrating a Romney fundraiser. (And there’s this: Prouty first made the video somewhat public by anonymously placing a few snippets from it on various websites, months before I found him and persuaded him to share the full hour-plus footage with me—which is not how a political operation would have put the video into play.)

Foval had said what he said. But did O’Keefe do anything to corroborate this assertion? I called him and asked. No, he said. In fact, O’Keefe insisted, he had no obligation to seek confirmation of Foval’s statements. “I’m reporting what he said,” O’Keefe told me. He added, Foval “sounded pretty sure of himself at the time.” I asked if a reporter could accept something as true merely because someone had said it. “We did not lead him on,” O’Keefe replied. He continued: “We just report what we hear and what we see.” Of Foval, he said, “Of course, he’s going to deny it.”

We then entered into a frustrating discussion about journalistic standards. Should reporters make public any assertion a person makes? I asked. O’Keefe pointed to the 47 percent video and the recent Access Hollywood tape that showed Donald Trump bragging about committing sexual assault. Where those videos corroborated? he asked. I explained there was a significant difference between a video capturing a public official talking about their own beliefs and actions and a video in which a person not directly connected to an event claims to have knowledge about it. O’Keefe kept insisting there was no difference. “He made a statement that was interesting,” O’Keefe said. “I put it out to the world.” His bottom line: “The video speaks for itself.”

I asked O’Keefe if he would release the raw footage he used for this video and the others he recently issued. His targets, claiming they are victims of biased editing, have called on him to do so. No, he said.

O’Keefe’s supposed exposé, which Bill O’Reilly promoted on Fox News, rests on a mistaken, jumbled, brief anecdote told by a fellow with no direct link to the 47 percent video—who admits he got it wrong. And there was no effort to substantiate this account. “A lot of reporting is what people say,” O’Keefe told me. Not in this case.