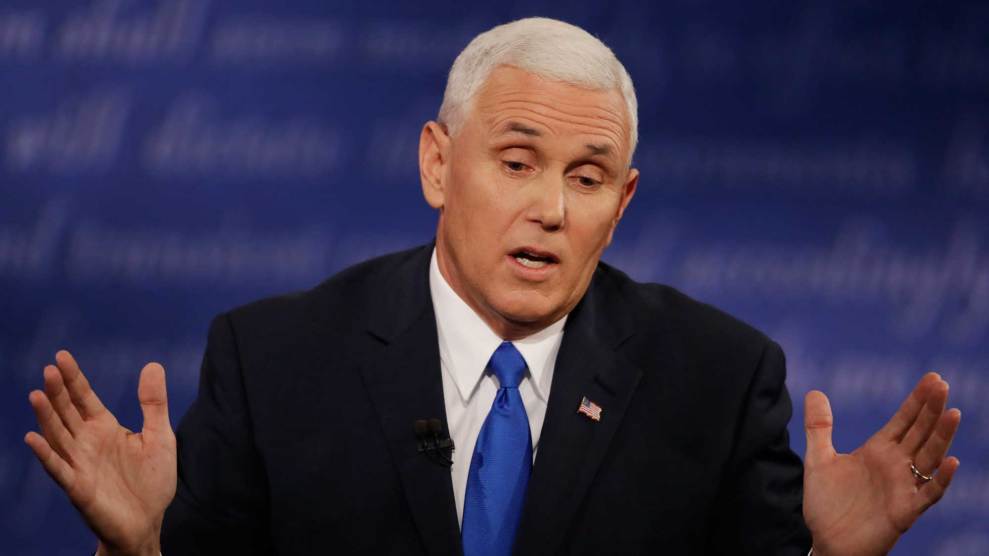 Throughout the 2016 campaign, Donald Trump has seemed content to cede leadership in Syria to Russia. But at Tuesday night’s vice presidential debate, Indiana Gov. Mike Pence made a stunning about-face from his running mate’s position by saying the United States should stand up to Russia and even be willing to bomb the Syrian military to stop humanitarian disasters.

“If Russia…continues to be involved in this barbaric attack on civilians in Aleppo, the United States of America should be prepared to use military force to strike military targets of the Assad regime,” Pence said. It was part of a forceful case that the United States should stand up to Russia, which is a key ally of Syrian President Bashar al-Assad. Russian aircraft have flown bombing missions in Syria for the past year, killing almost 10,000 people in that time. Russia has also stepped up its air campaign in recent days in the city of Aleppo, killing several hundred civilians and destroying hospitals in the process. “The provocations by Russia need to be met with American strength,” Pence said.

.@mike_pence: The US should be prepared “to strike military targets of the Assad regime” in #Syria https://t.co/WoFtnjP5Xt #VPDebate pic.twitter.com/ZkEMJADuwi

Pence’s comments were by far the most hawkish ones made so far by either the Trump or Clinton campaigns. During the Republican primaries, Trump proposed putting 30,000 troops in Iraq and Syria to defeat ISIS. But he has also said that the US has “bigger problems than Assad” and has repeatedly called for working with Russia on an anti-ISIS campaign. “If we could get Russia to help us get rid of ISIS—if we could actually be friendly with Russia—wouldn’t that be a good thing?” he said at a rally this summer. Confronting the Syrian army and its Russian allies could lead to direct combat between US and Russian aircraft or US jets being shot down by recently placed Russian missiles.

Clinton is also seen as a Syria hawk. She has criticized the Obama administration’s policy on Syria and supports the creation of a no-fly-zone to protect Syrian civilians. That hawkishness has drawn criticism from other Democrats, and Marine Gen. Joe Dunford, the Chairman of the Joint Chiefs of Staff, warned last month that a no-fly-zone could drag the United States into war with Russia. Kaine reiterated Clinton’s desire to create a “humanitarian zone” during Tuesday’s debate, but he pointedly avoided saying how a Clinton administration would enforce such safe areas and did not mention Clinton’s support for a no-fly-zone.