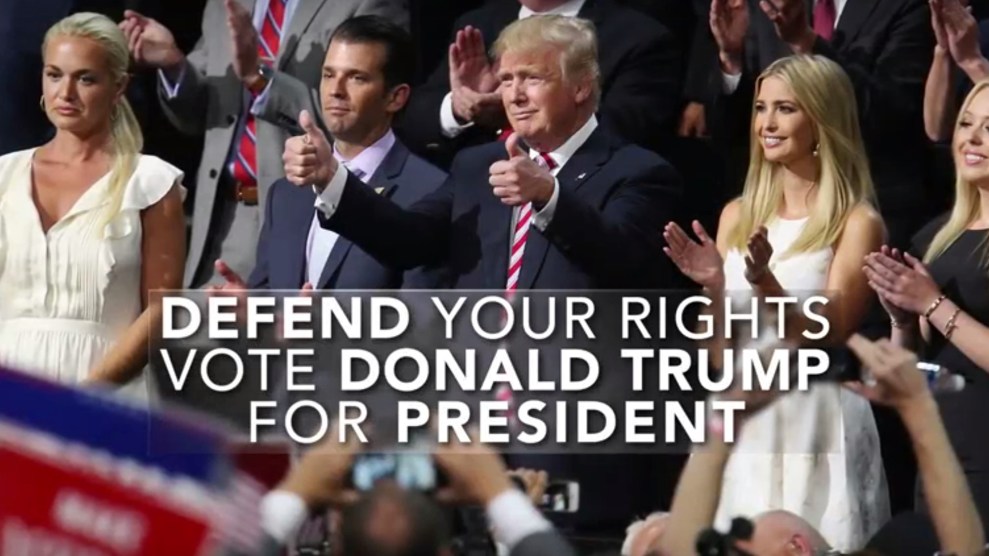 As more Republicans abandon their support for Donald Trump, the National Rifle Association has launched a more than $22 million ad blitz to help elect him and defeat Hillary Clinton. As reported by the Center for Public Integrity, the gun lobby is responsible for 16 percent of all pro-Trump television ads aired during this election cycle.

The NRA ads mostly target residents in the swing states of Ohio, North Carolina, and Pennsylvania, and and are tailored to court women—a demographic that’s expected to largely vote against Trump. According to CPI, the NRA has been behind about 1 of every 8 presidential TV ads aired in Ohio in October. (It’s aired about 1 in 9 presidential ads in North Carolina and about 1 in 20 ads in Pennsylvania during the month.)

While there’s been some discord within the NRA over its unprecedented support for Trump, the group’s massive spending can be understood as a last-ditch effort to block a Clinton presidency at all costs. Clinton has been a vocal proponent for more gun control measures, including expanded background checks and closing the so-called gun show loophole. While she has sought to reassure the gun owners that her support for “common sense gun safety measures” is compatible with the Second Amendment, the NRA’s advertising machine claims otherwise.

This recent NRA-backed ad, which played in the Nevada, Pennsylvania, Ohio, and North Carolina, depicts Clinton as an “out-of-touch hypocrite” who would leave Americans unarmed and defenseless.