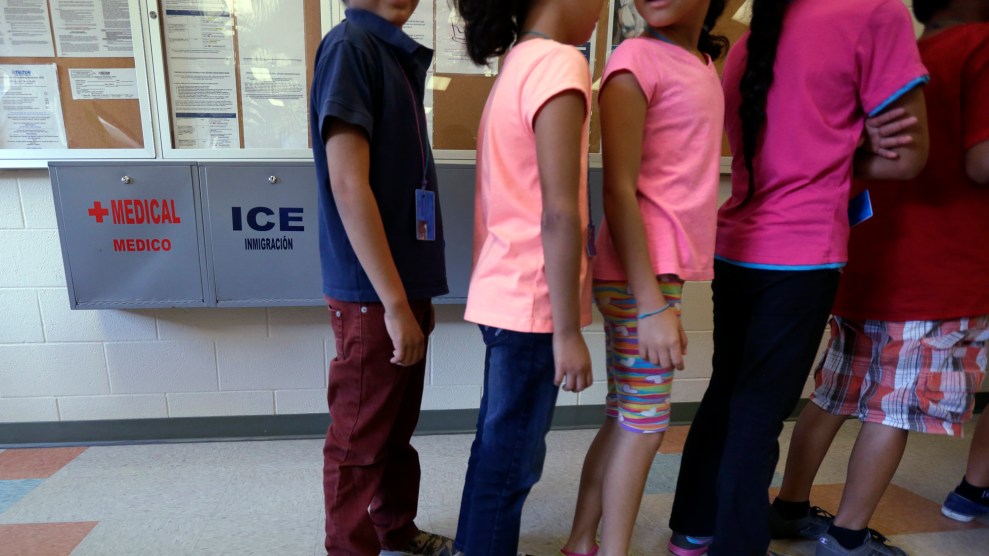 Children line up in the cafeteria at the Karnes County Residential Center, a family detention center in Texas.<a href="http://www.apimages.com/metadata/Index/Family-Detention-Licenses/364518bba13e4d0e992d846f7b29cf59/4/0">Eric Gay</a>/AP

Roughly 30 Central American women and their children who are applying for asylum in the United States are being held outside Philadelphia in a federal immigration detention center called the Berks County Residential Center. Many have been there for more than a year, and in August, 22 mothers went on hunger strike to protest their prolonged detention. Now, a group of 17 Democratic senators, including former presidential candidate Bernie Sanders and current vice presidential candidate Tim Kaine, have called on Secretary of Homeland Security Jeh Johnson to release the families and end the practice of family detention.

“Many of these mothers have asylum claims based on rape, severe domestic violence, and murder threats,” the senators wrote in a letter released on Tuesday. “It is unconscionable to keep these children locked up and goes against our most fundamental values.” The children at Berks, who make up about half the population of detainees, range in age from 2 to 16 years old. Many have been held for months and, in some cases, more than a year. The senators said family detention is “wrong” and “should be ended immediately,” pointing to research showing that prolonged confinement is harmful to children’s physical and mental health.

The Berks Center is one of three family detention centers in the country. The other two, located in Texas, were opened by the Obama administration in 2014 in response to the surge in unaccompanied minors crossing the border. Around that time, the centers came under scrutiny for poor medical care, lack of access to legal council, and alleged sexual abuse. (Earlier this year, one former guard at Berks was sentenced to prison for sexually assaulting a teenage detainee.)

Last summer, the administration announced a series of reforms to reduce the length of confinement. Shortly afterward, a district court in California ordered the government to release migrant children within three to five days of their initial confinement, or within 20 days under extreme circumstances. The administration says it has taken steps to come into compliance with that court decision. Secretary Johnson has said his agency is detaining families for an average of 20 days or less, but advocates say the experience of the Berks mothers tells another story.

The 17 senators urged Johnson to review their cases and release them unless they are a serious flight risk or threat to public safety. Hillary Clinton has taken a similar position as her running mate and called for an end to family detention.