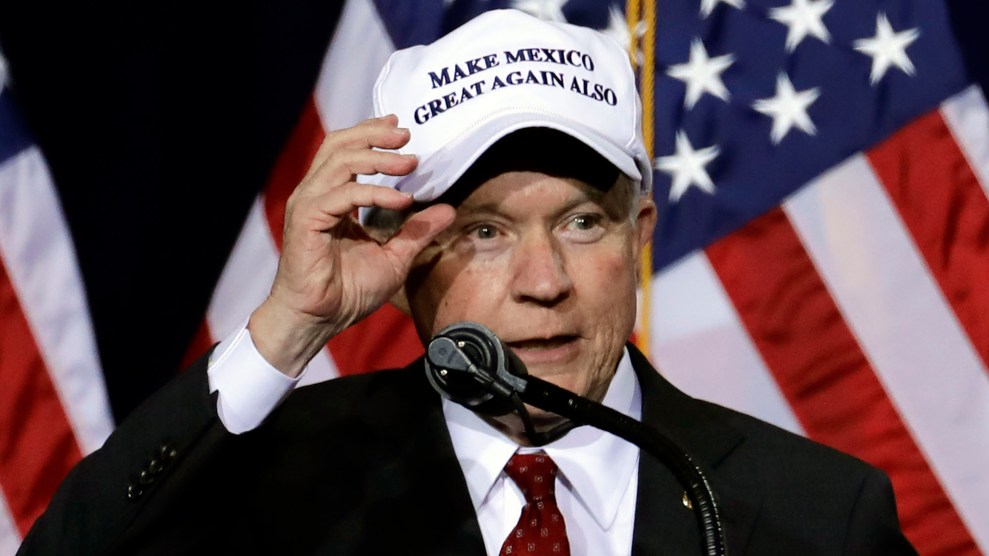 As President-elect Donald Trump’s transition team takes shape, Trump’s guiding principle appears to be choosing people who are loyal to him. And one man’s devotion is paying off nicely.

Sen. Jeff Sessions of Alabama, who built a reputation in the Senate with his extreme opposition to immigration, is Trump’s pick for attorney general. But his influence could reach far beyond that powerful role: Trump’s transition team is full of current and former Sessions staffers. The depth of Sessions’ clout on the Trump team is perhaps the clearest sign that the anti-immigrant agenda Trump campaigned on is one step closer to becoming reality.

Sessions has faced repeated accusations of racism stemming from his time as a young lawyer in Mobile, Alabama. In the Senate, Sessions has been most vocal as an opponent of immigration. Tucker Carlson, the founder of the conservative Daily Caller, met Sessions during one of his battles against immigration in 2014 and came away describing him as a “nationalist.” When Sessions became chairman of a Senate panel on immigration in January 2015, he promptly renamed it the “Immigration and the National Interest” subcommittee, “as a declaration to the American people that this subcommittee belongs to them,” not to the “financial and political elite.” Just a few months later, Trump was running for president promising to put “America First.”

Sessions has built his reputation in the Senate by waging all-out assaults on the last two efforts in Congress to pass comprehensive immigration reform. His efforts were instrumental in killing a reform bill in 2007. Six years later, he took a similar stand against another reform bill. Breitbart News—the right-wing site run by Stephen Bannon, now slated to become Trump’s chief White House strategist, as a platform for the white nationalist “alt-right” movement—closely and approvingly covered Sessions’ opposition to the 2013 bill. When it passed the Senate, Sessions distributed a 23-page handbook to House members, arming his allies with figures and talking points to kill the bill in the lower chamber. Intimidated by right-wing opposition to the measure, Republican leaders in the House never brought the bill up for a vote. Sessions won.

“Sessions is the most anti-immigrant senator in the chamber,” says Frank Sharry, who runs the pro-immigration reform group America’s Voice. “He enjoys that distinction without much competition.”

Sessions’ current and former staffers are playing a major role in the Trump transition and will likely have posts in the administration next year. His former staff director on the Senate Judiciary Committee, a lawyer named Brian Benczkowski, is running the transition at the Justice Department. According to the Daily Caller, Stephen Miller, Sessions’ former communications director and right-hand man in his battle against the 2013 bill, is being considered for a number of positions, including deputy chief of staff for policy and director of the Domestic Policy Council. Rick Dearborn, Sessions’ chief of staff who worked unofficially with the campaign for months, is being considered for director of the Office of Legislative Affairs in the White House. Sessions’ chief counsel on the judiciary committee, Danielle Cutrona, is in charge of “Immigration Reform & Building the Wall” on the Trump transition team, according to document obtained by the New York Times. The transition at the Department of Homeland Security, which overseas much of the government’s immigration policy, is being led by Cindy Hayden, who served as Sessions’ chief counsel on the judiciary committee during his battle to defeat immigration reform in 2007; Sessions and others have credited Hayden with “stomping that bill to death.”

“Sessions is the most anti-immigrant senator in the chamber. He enjoys that distinction without much competition.”

Even as he prevailed in derailing two immigration reform efforts, Sessions stood apart from his colleagues on the issue. Sessions doesn’t just oppose a pathway to citizenship for undocumented immigrants, as many Republicans do; he wants fewer immigrants, period. That includes people who come to the country legally. Sessions and his staffers “viewed this much more as a fight for the soul and identity of America as they knew it, rather than one of policy disagreements,” says one former Democratic aide who worked on the 2013 immigration bill. “And this sort of animated the level of vitriol and emotion among both the senator and the staffers on that bill.”

As the former aide points out, Sessions and his staff obsessed over the number of immigrants who would enter the country, claiming that the bill would give 30 million new immigrants legal status. “The entirety of it is: Albert Einstein or Osama bin Laden are just a digit, number one, and they’re all equally bad, basically, from the standpoint of how they deal with immigration,” says the staffer.

Sessions wasn’t shy about his opposition to immigration, but he had few allies on this point—until Trump came along. In spring 2013, as the immigration reform bill was undergoing a mark-up in the Senate Judiciary Committee, Sessions put forward an amendment to limit legal immigration. Only Sessions voted for it, and it failed 17-1. “He was isolated in the Senate, and now he has the president’s ear,” says Sharry. “And that is a frightening thing.”

When most of the political press and Capitol Hill lawmakers were laughing at Trump’s presidential run in the summer of 2015, Sessions and his staff began to reach out. Sessions and Miller helped Trump write his immigration and trade policies. Shortly before the Iowa caucuses, Miller officially joined Trump’s campaign, becoming an increasingly influential figure in Trump’s small circle of advisers and aides. A month later, Sessions became the first—and only—senator to endorse Trump during the primary. Trump was adopting policies that Sessions had been pushing, largely in isolation, for years. “Whether the issue was trade or immigration or radical Islam, for many years before Donald Trump came on the scene, Senator Sessions was the leader of the movement and Stephen was his right-hand man,” Bannon told Politico Magazine this summer, shortly before he, too, joined Trump’s campaign.

Democrats and immigration advocates will put up a big fight during the Senate hearings on confirming Sessions as attorney general. “I think he’s going to have a pretty rough ride and I think there will be a lot of opposition to him,” Sharry predicts. “Remember, Jeff Sessions wasn’t confirmed last time he was before the Senate.”

Sessions doesn’t just oppose a pathway to citizenship for undocumented immigrants, as many Republicans do; he wants fewer immigrants, period.

In 1986, Sessions was a prosecutor in Alabama when President Ronald Reagan nominated him for a federal judgeship. In his confirmation hearings, witnesses testified that Sessions held troubling and backward views on race. A Justice Department official said Sessions had called the NAACP and the American Civil Liberties Union “un-American” groups that “forced civil rights down the throats of people.” A black prosecutor named Thomas Figures, who had worked in Sessions’ Alabama office, claimed the nominee had referred to him as “boy,” once warned him to “be careful what you say to white folks,” and commented that he was okay with Ku Klux Klan members “until I learned they smoked pot.” Sessions said his comment about the KKK was a joke—perhaps one that some senators in 2016 will not find amusing given that the KKK endorsed Sessions’ presidential candidate of choice.

At the time of his contentious 1986 confirmation hearings, Sessions had recently wrapped up unsuccessful prosecutions of three civil rights activists, including a former aide to Martin Luther King Jr., for voter fraud after they had worked to register black voters in Alabama. The jury acquitted the men after a few hours. In his confirmation hearings, Figures said Sessions had been reluctant to prosecute civil rights cases.

Sessions denied most of those allegations, including calling Figures “boy,” and said his comments about civil rights groups being “un-American” was in reference to their foreign policy stances. But the testimony derailed his nomination, and he was not confirmed.

“Mr. Sessions is a throwback to a shameful era which I know both black and white Americans thought was in our past,” the late Sen. Ted Kennedy (D-Mass.) said on the first day of Sessions’ 1986 confirmation hearings. “It is inconceivable to me that a person of this attitude is qualified to be a US attorney, let alone a US federal judge.”

Thirty years later, Sessions is poised to rise to an even higher position under Trump.