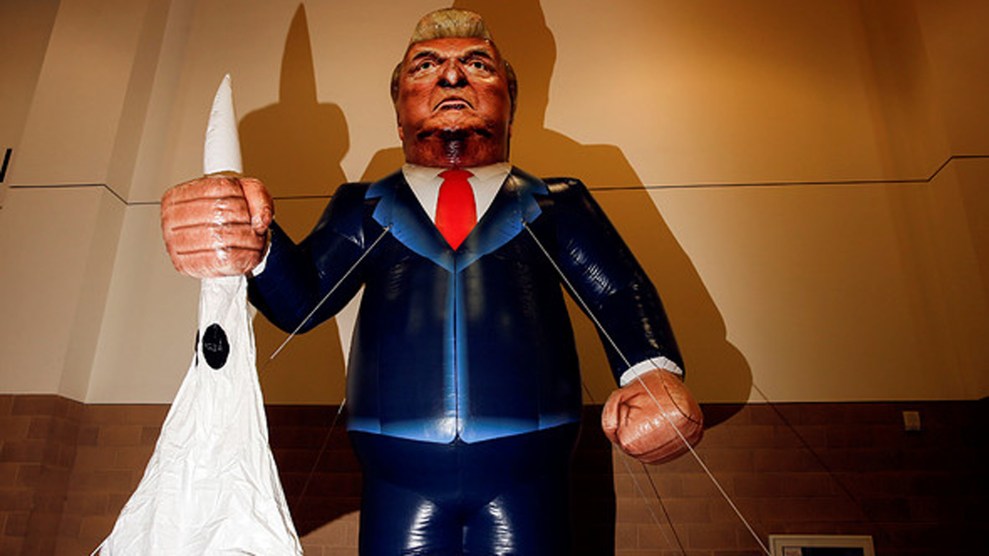 The official newspaper of the Ku Klux Klan voiced its support for Donald Trump today, adding to the already lengthy list of white nationalist groups who have cheered the Republican presidential nominee. The KKK quarterly The Crusader (“The Premier Voice Of The White Resistance”) devoted its latest front page to a throaty defense of Trump’s “Make America Great Again” slogan.

“You can see it on the shirts, buttons, posters and ball caps such as the one being worn here by Trump speaking at a recent rally,” writes Pastor Thomas Robb, the head of the Knights of the Ku Klux Klan. “But can it happen? Can America really be great again? This is what we will soon find out!”

“While Trump wants to make America great again, we have to ask ourselves, ‘What made America great in the first place?'” Robb continues. “The short answer to that is simple. America was great not because of what our forefathers did — but because of who our forefathers were. America was founded as a White Christian Republic. And as a White Christian Republic it became great.”

“The Crusader” is the official newspaper of the KKK. #MAGA #DonaldTrump pic.twitter.com/mBTvLOFU9u

Asked by the Washington Post, Robb stopped short of calling it a formal endorsement—the article warns fellow white nationalists that most conservatives, Trump included, do not fully grasp that a “racial time bomb” is ticking—but said it nevertheless showed the paper’s enthusiastic support for the Trump campaign.

“Overall, we do like his nationalist views and his words about shutting down the border to illegal aliens. It’s not an endorsement because, like anybody, there’s things you disagree with,” Robb said. “But he kind of reflects what’s happening throughout the world.”