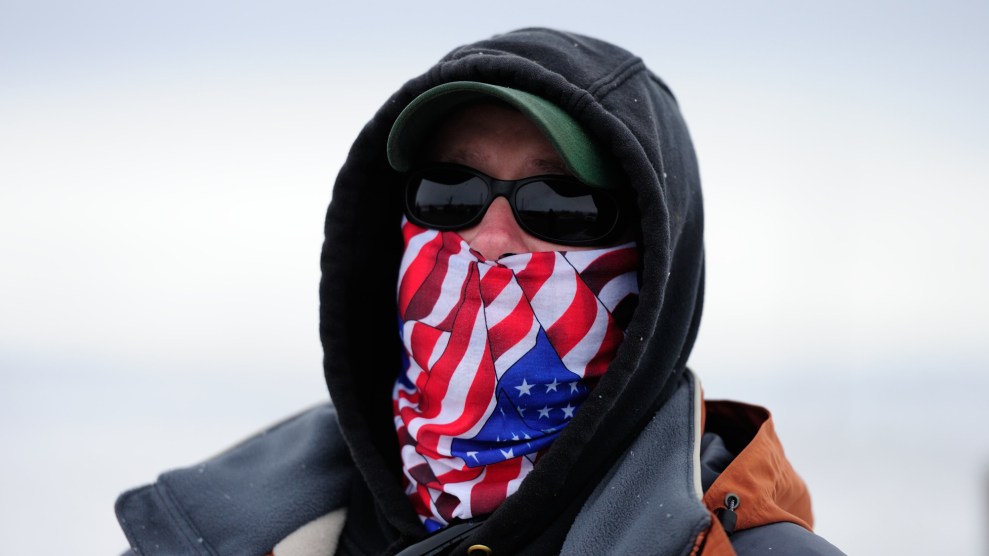 Militia groups are rejoicing in Donald Trump’s unexpected victory. As the election results poured in on Tuesday, militia members went from worrying about a rigged election to celebrating Trump’s increasingly inevitable win.

When Trump was declared the winner, a user on the website Modern Militia Movement wrote, “Tonight we claim a victor, thank God, now the hard work begins, holding their feet to the fire to make sure that they do all in their power to help us Restore our country back to what it should be a Constitutional Republic!”

“To pull victory from the jaws of defeat, it’s amazing,” says Chris Hill, the leader of the Georgia Security Forces, a militia group founded in the wake of President Barack Obama’s election in 2008.

Many militia members were solidly in the Trump camp during this election season, and Trump was endorsed by several figures affiliated with the militia movement. Hill hopes Trump will prove to be an ally. “I’m sick and tired of the Department of Homeland Security or the Southern Poverty Law Center or FBI or all these law enforcement agencies brainwashing people to say that anybody who believes they need to hang onto their guns to protect their own security are the bad guys and they’re the terrorists,” he says. “I hope that Donald Trump plays an instrumental part in getting the government off our backs.”

Militia groups had been preparing for the worst on Election Day. In a three-hour webinar released last week, the Oath Keepers, a national “patriot” group that recruits veterans and law enforcement officers, warned of possible civil unrest and violence. One participant urged people to “cast your vote, gather up your family, your friends, your meds, your pets, your important documents and leave”—or risk having to “fight for your lives.” The Oath Keepers even identified “threat groups” that it speculated might disrupt the election, such as Black Lives Matter.

The Oath Keepers org has identified which groups are most likely to go violent before, during, and after the upcoming election. pic.twitter.com/DbHg1SXgAq

According to Reuters, Hill, who also goes by the handle General Bloodagent, had predicted that if Hillary Clinton won, there would be an armed march on Washington, DC.

As militia members prepared for a Clinton victory, many repeated Trump’s claims that the election would be rigged. The Oath Keepers called on its members to show up incognito at polling places to document suspected voter fraud, raising concerns that their presence would suppress minority votes. This call to action led to a legal battle in New Jersey, which the Oath Keepers ultimately won when a Republican-appointed federal judge ruled in their favor. Stewart Rhodes, the leader of the Oath Keepers, told Mother Jones that volunteers did show up across the country, though he didn’t specify in how many states.

“I hope that Donald Trump plays an instrumental part in getting the government off our backs.”

This election season may have driven even more people into the ranks of militias. According to Hill, interest in his III% Security Forces movement has been rising over the past year, with more chapters forming across the country. (One of those new groups was linked to three Kansas men recently arrested for planning to bomb Somali Americans on the day after the election. Hill has since cut off ties with that group). He says there are chapters in 24 states now, compared with chapters in 6 states at this time last year.

Other members of the patriot movement are less optimistic that the ranks of militias will swell. The leader of the Oath Keepers, Stewart Rhodes (who does not consider his group a militia, but who has been identified by monitoring groups as a key figure in the militia movement), told Mother Jones that he predicts the far-right could become complacent, and that militia activity could drop off as a result.

If Trump’s election spells the end of the latest surge in militia activity, Pitcavage says, “This is one of the few areas where there might be a silver lining.”

Mike Morris, co-founder of the Colorado-based Three Percent United Patriots, describes himself as a “reluctant Trump supporter.” He expects that with Republicans in charge of the federal government, militia groups may have more of a political voice. Militia membership may even increase, he predicts, because “I think the American people have woken up.” But he cautions that the patriot community may still find conflicts with a Trump administration, particularly when it comes to attempts to implement a nationwide stop-and-frisk program or block people on the no-fly list from buying guns.

“The patriot movement cannot be a mouthpiece for the incoming administration,” Morris says. “We have to be just as vigilant in January as we are today.” Hill agrees, adding, “Revolution is still on the table.”

The Resurgence of Militias

The number of militia and anti-government “patriot” groups spiked in the ’90s during the Clinton administration and then quickly declined during the Bush years, only to surge again after the election of President Barack Obama. Read more about the history of American militias.