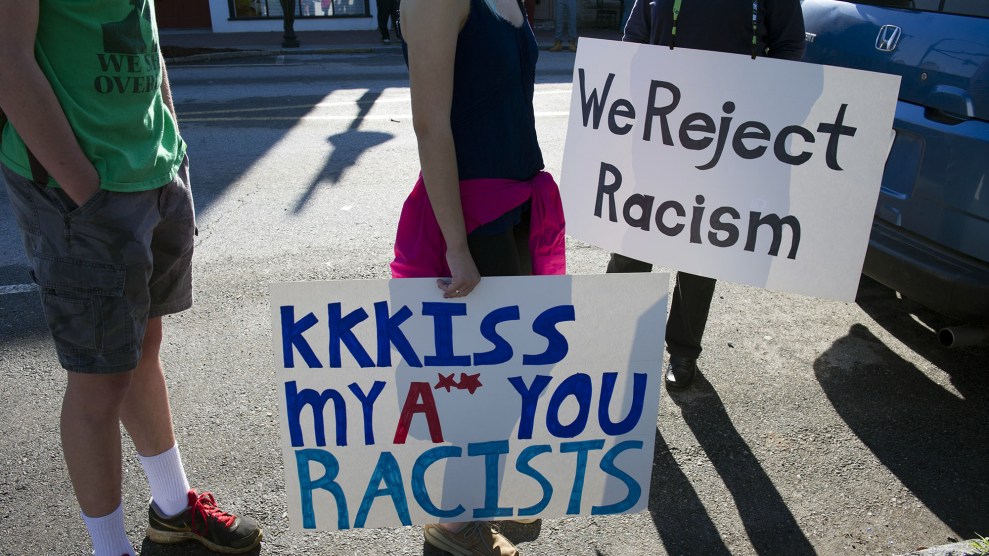 Editor’s note: This post, from former MoJo senior editorial fellow Zaineb Mohammed, originally appeared on Facebook. We asked her to expand on it for our readers.

I keep reading these Facebook posts apologizing to Muslims, to queer people, to immigrants, to people of color for the election of Donald Trump. I know these posts are meant in solidarity, but right now they just make me feel like I am already being mourned: The worst has happened, the world is ending, and I will not save you—I will just lament the loss of your existence.

In two weeks, three months, a year, when these white allies who are outraged and appalled and disgusted realize that a Trump presidency will not significantly impact their day-to-day lives, are they going to abandon us?

When these white allies who are outraged and appalled and disgusted realize that a Trump presidency will not significantly impact their day-to-day lives, are they going to abandon us?

Will they put their bodies between us and the deportations, the bans, the databases, the imprisonment, the torture, the threats to our existence? Or will they post an apology for what has happened, and what is yet to come?

I am so worried about the normalization and inevitable complacency that will set in. Already, it is happening. And yet, even as I worry about it, I understand.

I am an anxious person, and all I want in this moment is to be reassured. My desire for comfort has never been this intense. So when I read the headlines saying that Trump is reconsidering repealing Obamacare, and that it will be much harder for him to implement all of his campaign promises than he thinks, I feel a momentary sense of relief.

It is hard to worry about all of the things there are to worry about, to maintain a feeling of horror, and I look for signs that my life is not going to change. I have a job; I have financial security; I am Muslim but am not easily identifiable as a Muslim; I live in the Bay Area—I will be okay.

This is how it happens.

Comfort is an indulgence we can’t seek out now. Because, for so many people, there is no comfort. For many, there never has been.

A friend posted an article in which Trump said he would absolutely require Muslims to register and a couple of people responded clarifying that the article was actually from 2015. I felt reassured for a moment. But what has become of the world when we can be comforted that the president-elect’s demand for a religious group to register came a year ago and not yesterday?

A Facebook friend suggested that if Trump actually calls for Muslims to register, everyone in the United States should do so as well to overwhelm the authorities. This is a beautiful sentiment. Would you do it?

Another Facebook friend who posted that same article suggested that if Trump actually calls for Muslims to register, everyone in the United States should do so as well to overwhelm the authorities. This is a beautiful sentiment. Would you do it?

Too often, we let ourselves off the hook. How will we purposefully make ourselves uncomfortable when comfort is within reach?

I’m reminded of a self-defense class I took back in the summer, when a white woman mentioned feeling guilty about crossing the street when a black man is walking toward her. The instructor said racism is systemic, not something an individual can solve, and she shouldn’t feel bad for valuing her personal safety.

Racism is systemic. Racism is individual. We have to stop letting ourselves off the hook.

When your life is not on the line, and when what’s required is sacrificing so many of the comforts you are accustomed to, what will you give up for the rest of us? I am asking myself this too. If I am being honest, the answer so far is very little, if anything at all.

I hope the answer is a lot. Because we will need it.