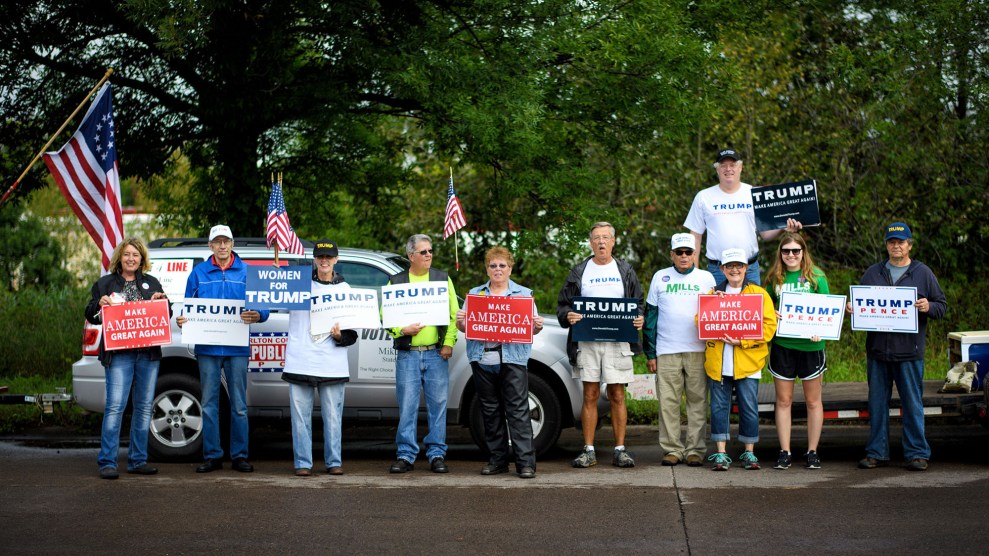 Like labor unions everywhere, the local Plumbers & Pipefitters union in Ohio’s Mahoning Valley—a historically Democratic bastion due to the influence of labor—endorsed Hillary Clinton for president in September 2015 and urged its members to vote for her. But unlike in years past, when Roland “Butch” Taylor briefed about 200 members on the union’s support of Clinton and the prospective benefits of a Clinton presidency in May, the meeting didn’t go well. “I got a lot of boos,” he recalls. “I got a lot of chatter back. And out of the group, only one person came up and asked me for a T-shirt.”

“Right then and there, I knew something was wrong,” says Taylor, who retired a few months later. “I thought, ‘Well, maybe it will change as the campaign moves forward.'”

As the results on election night show, it didn’t change. Clinton fell well short of polls and expectations in the Rust Belt, losing two key swing states, Pennsylvania and Ohio, and two that were thought to be safe bets, Michigan and Wisconsin. Working-class white voters, including many union members, banded together into a pro-Donald Trump force that the strategists in Clinton’s Brooklyn headquarters didn’t see coming until it was too late.

But local Democrats did. And they tried to warn the Clinton campaign.

In May, after thousands of Democrats had switched parties to vote for Trump in the primary, Mahoning County Democratic Party Chairman David Betras circulated a memo cautioning that Trump was making headway in his Rust Belt region and urging the Clinton campaign to take the threat seriously. The memo focused largely on the issue of trade, arguing that because Democratic politicians in Ohio regularly denounce the North American Free Trade Agreement and free trade generally, Trump’s anti-trade message was familiar and its appeal powerful. If the Clinton team didn’t find a way to counter it, Betras warned, she would lose a lot of votes she was counting on.

Betras sent the memo to Aaron Pickrell, an adviser to Clinton’s Ohio campaign team; David Pepper, the chairman of the Ohio Democratic Party; Rep. Tim Ryan, a Democrat who represents northeast Ohio; and union leaders in the region.

To counter Trump’s populist appeal, Betras urged Clinton to go vigorously after blue-collar workers by promising to bring back jobs. The key, Betras argued, was to have this message delivered not by politicians but by local blue-collar families in radio and television ads across the region. “The messages can’t be about job retraining,” he wrote. “These folks have heard it a million times and, frankly, they think it’s complete and total bullshit.” Instead, he argued, the ads should “focus on the reinvigoration of American manufacturing, and I don’t mean real high-tech stuff because they’ve heard that a million times before and they aren’t buying it.”

Talk about policies that will incentivize companies to repatriate manufacturing jobs. Talk about infrastructure—digging ditches, paving roads, building buildings and producing the materials needed to do it all. The workers we’re talking about don’t want to run computers, they want to run back hoes, dig ditches, sling concrete block. They’re not embarrassed about the fact that they get their hands dirty doing backbreaking work. They love it and they want to be respected and honored for it. And they’ll react positively if they believe HRC will give them and their kids the opportunity to break their backs for another ten or twenty or thirty years. Somewhere along the line we forgot that not everyone wants to be white collar, we stopped recognizing the intrinsic value of hard work.

Clinton did revoke her support for the Trans-Pacific Partnership free-trade deal, supported unions and higher wages, and talked about an economy that would work for all people. While Trump spoke in broad strokes, her website boasted detailed economic plans, including one to bring back manufacturing. But it was clear from Bernie Sanders’ primary victories in Wisconsin and Michigan that she was lagging with the white working class. Like Republican presidential nominee Mitt Romney four years ago, she was the candidate who made millions by giving speeches to Wall Street banks. (It certainly didn’t help that when pieces of those speech transcripts were released in the WikiLeaks hacks, the sentence that stood out most was: “My dream is a hemispheric common market, with open trade and open borders.” Trump used that line at his campaign rallies to claim, falsely, that Clinton was going to open the borders completely.)

“Somewhere in all of this, we forgot that we’re the party of the working class,” says Betras, trying to explain Clinton’s loss. He believes the campaign did try to reach out to the blue-collar families of the Rust Belt, but that the attempts never reached the pitch and fervor they needed. “I did like her message of ‘Stronger Together,’ but that doesn’t get anyone a job, does it?”

The Ohio Democratic Party shared Betras’ memo with Clinton’s Ohio campaign team, according to state party spokeswoman Kirstin Alvanitakis. In an email to Mother Jones, Alvanitakis wrote that “Chairman Betras’s memo was a helpful reminder that Democrats should not neglect working-class voters and the Clinton campaign should acknowledge the very real struggles working families are facing in Ohio.”

She added, “The Ohio Democratic Party was the first state party in the nation to pass a resolution against fast-tracking the Trans-Pacific Partnership, and our leaders—including Sen. Sherrod Brown, Rep. Tim Ryan, Rep. Marcy Kaptur and more—acutely understand the economic pressure facing working-class families because of terrible trade deals and big banks and corporate special interests run amok. The fact is that the typical Ohio household had a higher income three decades ago than it has had in the past few years.”

Betras believes strongly that economic populism was to thank for Trump’s Rust Belt victories, saying, “It was people who want a job and want to be able to work and want a job, and they would accept an imperfect messenger because at least he was saying that.” But of course there was more to Trump’s message. Some African American residents of Youngstown, the largest city in Mahoning County, have long believed that Trump’s appeal in the region had more to do with racial resentment than with economic populism—that Trump’s racially charged rhetoric united white voters against others who they believed were taking their jobs, their culture, and their country. (On Tuesday night, Clinton won Mahoning County by a hair thanks to backing in minority-majority Youngstown but lost the mostly white surrounding counties of the Mahoning Valley.) As a local African American labor organizer told Mother Jones this summer, “This whole racist rhetoric plays well with some people here.”

Like Betras, Taylor doesn’t believe his peers and neighbors who supported Trump are racist. But he understands how Trump’s talk about immigration appealed to people in the Rust Belt. A few years ago, his union was working on a billion-dollar natural gas processing plant, and the workers noticed that the bulk of the work was being done by Spanish-speaking laborers who arrived each morning on buses. “It brought a lot of resentment to the area because they’d never seen it before,” Taylor says. “People see that and then they go tell everybody else, and social media, the way it is, it just runs wild.” He believes Trump benefited when the community saw immigrants “taking jobs that Americans think they should be doing.”

When went to Youngstown in June and met Taylor, jovial and smartly dressed in a suit, he believed his peers would see through Trump’s demagoguery on trade and manufacturing and reject him. “We also are citizens of this country concerned about how he’ll react, whether it’s a nuclear war, God forbid, to racist comments, to deporting [immigrants],” he said. “These are core beliefs that as citizens of this country we don’t stand for.”

In the aftermath of the election, even as Taylor looks backs and sees the writing on the wall, he sounds shaken by what the country—and specifically white-working class voters in the Rust Belt—allowed to happen. He acknowledges that the Clintons were “wrapped so close to NAFTA” (which Bill Clinton approved as president) and that Hillary Clinton’s speaking fees from big banks looked bad. “I see where people would have resentment,” he says.

But then, sounding close to tears, he adds, “She’s the most qualified person ever to run for the position, and I agree, she would have done a great job if given the opportunity. But she did not—she had the opportunity to win. She did not win.”