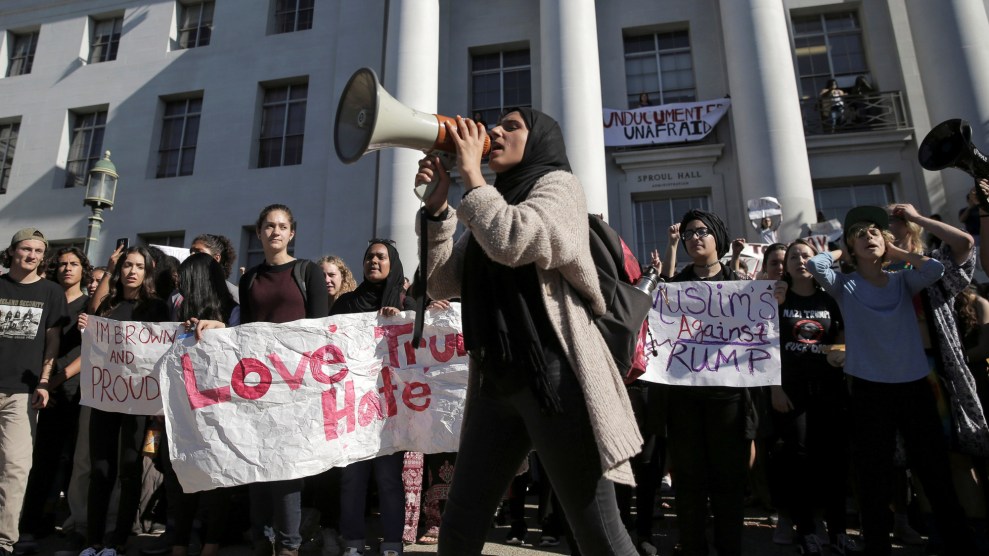 A high school student in Berkeley, California, at an anti-Trump protestElijah Nouvelage/Reuters/ZUMA

In the week since Donald Trump’s election, a rash of racist, anti-Muslim, and anti-Semitic incidents—from chants of “Build that wall!” to swastika graffiti—have surged inside classrooms, on college campuses, and in communities around the country.

As of Monday, the Southern Poverty Law Center had collected more than 400 allegations of election-related intimidation and harassment nationwide. The SPLC has been sounding the alarm for months about the so-called “Trump effect” in America’s schools—the rise of classroom bullying and harassment driven, at least in part, by the antagonistic rhetoric of the presidential campaign—and more than one-third of the incidents it has tracked took place at K-12 schools or universities.

These reports coincide with the release of the FBI’s annual report on hate crimes in America. The new federal data, out Monday, showed a roughly 6 percent increase in assaults, bombings, threats, and other hate crimes in 2015. Anti-Muslim crimes jumped nearly 67 percent from 2014; the 257 incidents were the most since 2001, when there were 481 such attacks. Black people faced the most race-based attacks, with incidents up 7.6 percent, and anti-Jewish crimes, which remained the highest among religious-based attacks, went up about 9 percent.

Meanwhile, of the 437 alleged incidents compiled by the SPLC in the last week, more than 160 occurred in K-12 schools and universities. Here are five notable examples:

DeWitt Junior High School (DeWitt, Michigan): A day after the election, a teacher saw a couple of students lying on the ground before school started, joking they’d form a wall. The teacher told them to move. Later, students locked arms and prevented other students from passing. Some made comments toward minority students. Corina Gonzalez told the Lansing State Journal that her daughter tried to get to her locker when a group of boys blocked her. “They were chanting things such as, ‘Donald Trump for president. Let’s build the wall. Let’s make America great again. You need to go back to Mexico,'” Gonzalez told the Journal.

John Dieter, superintendent of DeWitt Public Schools, condemned the “reprehensible and completely unacceptable” actions in a letter to parents. He added that it wasn’t a “coincidence” that the events took place after the election. “Our children are still processing everything that they have heard and seen and they are trying to make sense of their world,” Dieter told parents, adding that Trump, President Barack Obama, and Hillary Clinton all had called for unity. “We need to share this message with our children and we need to move forward and heal.”

York County School of Technology (York, Pennsylvania): Video surfaced last Wednesday showing two students carrying a Donald Trump/Mike Pence sign through a hallway. One of them shouted, “White power!” After reports of the incident spread, students protested and came forward to discuss harassment they had experienced during the campaign season. Gov. Tom Wolf condemned the acts as “overt racism.” The York Dispatch reported that last Friday, representatives from the Pennsylvania Department of Education and the state Human Relations Commission visited the school to evaluate the situation and offer support to students. And on Sunday, the York Daily Record reported that three students had been disciplined, and that York Area Regional Police Department was investigating allegations of harassment.

Victorria Markle and Eibreha Drayden, two freshmen at the school, told the Dispatch that they had noticed episodes of harassment throughout the last month. Markle, who is part black, told the paper that she had been called the N-word and threatened with stabbing and murder. She added she heard shouts from a group of students when she entered school on Wednesday. Drayden, who is part Mexican, told the Dispatch she was whistled at like a dog and had been told she would be sent over the wall.

Council Rock North High School (Newtown, Pennsylvania): Council Rock School District Superintendent Robert Fraser sent a letter last week to parents across the district about acts of vandalism and harassment at Council Rock North High School. Someone wrote “I Love Trump,” drew swastikas, and added a derogatory remark about gay people on a piece of paper in the girls’ bathroom. Another person left graffiti on a toilet paper dispenser in another girls’ bathroom, writing: “If Trump wins, watch out!” Someone drew two swastikas in a boys’ bathroom. And a Latina student uncovered a note in her backpack that told her to return to Mexico. (Other Latinos heard inappropriate remarks.)

“I cannot emphasize strongly enough how inappropriate these actions are and that they simply will not be tolerated,” Fraser told parents. Newtown Township Police and the Council Rock School District were investigating. Parents and educators met to discuss what transpired on Monday.

Royal Oak Middle School (Royal Oak, Michigan): At lunchtime, seventh-grader Josie Ramon sat in the cafeteria when she heard a group of students chanting, “Build a wall!” Ramon, who is Mexican American, pulled out her phone and took video and shared it with her mother, Alicia. “Tears were running down my face,” Ramon told the Detroit News last week. “I was so upset.”

Royal Oak Schools Superintendent Shawn Lewis-Lakin said in a statement that school personnel responded to the incident, adding that “because of the strong emotions and intensity of rhetoric” following the video’s spread on social media, families had expressed concern about school safety. “In responding to this incident—indeed in responding to this election—we need to hear each other’s stories, not slogans, we need to work towards understanding, not scoring points,” Lewis-Lakin said last week. “We need to find a way to move forward that respects and values each and every member of our community.”

North Bend Middle School (North Bend, Oregon): Students shouted “Go back to Mexico!” at an 11-year-old Colombian American student. North Bend School District superintendent Bill Yester told a local newspaper last week that while the election played a part in the bullying, school personnel dealt with it quickly and held an assembly on harassment. “We’re going to be in good shape,” he said. “We will continue to watch it, and parents were called about their students’ behavior, but if those parents are supportive, this will stop.”