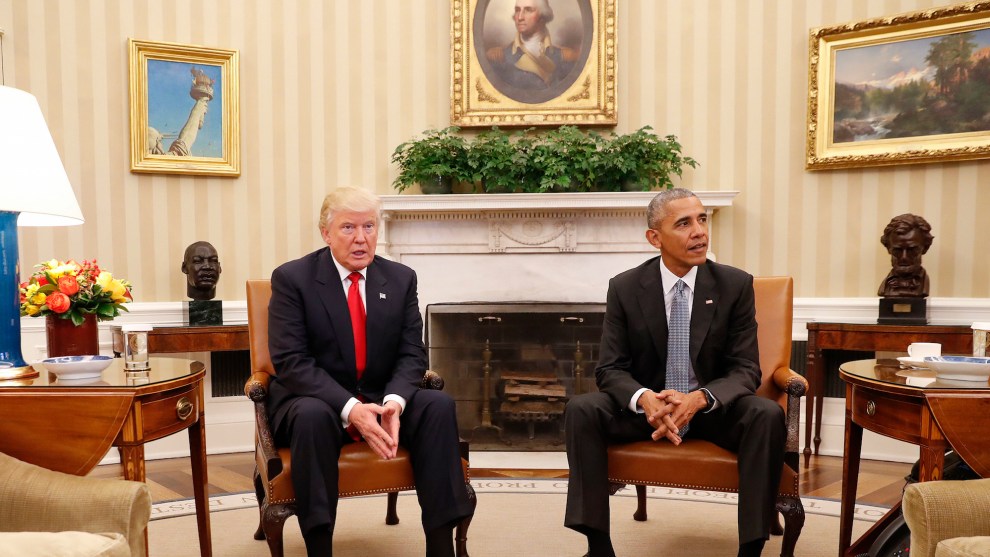 President Barack Obama and President-elect Donald Trump addressed reporters at the White House on Thursday following their first post-election meeting, with both men striking conciliatory tones and committing their respective teams to working together.

Obama told reporters in the Oval Office that he was “very encouraged by President-elect Trump’s interest in working with my team,” telling Trump directly that “we are now going to do everything we can to help you succeed.” Trump in turn praised his conversation with Obama and said he would turn to the outgoing president for counsel in the future. “It was a great honor being with you and I’m looking forward to being with you many, many times in the future,” Trump said, before the two men shook hands for the cameras.

.@realDonaldTrump on meeting with @POTUS: “I very much look forward with dealing with the president in the future” pic.twitter.com/A7lCpHPNea

Despite the bonhomie, the scene at the White House on Thursday was jarring. Trump spent years attempting to delegitimize Obama’s presidency by leading the birther movement, and he viciously attacked Obama on the campaign trail, calling him the “founder of ISIS” and routinely questioning his presidency. Obama also went hard after Trump in the final stages of the campaign, mocking him as unfit and dangerous.

Trump also broke with precedent by not bringing a pool of traveling press to document the meeting. Many reporters saw it as a preview of how the Trump White House may treat the press after a campaign in which Trump’s team was hostile to the media and Trump himself stoked abuse of reporters at his rallies. Obama and Trump’s time with the press even ended with an ominous joke by Obama: “This is a good rule,” he said. “Don’t answer any questions.”

“Trump’s flouting of press access was one of his first public decisions since his election.” https://t.co/4vi1VTp66t #opengov