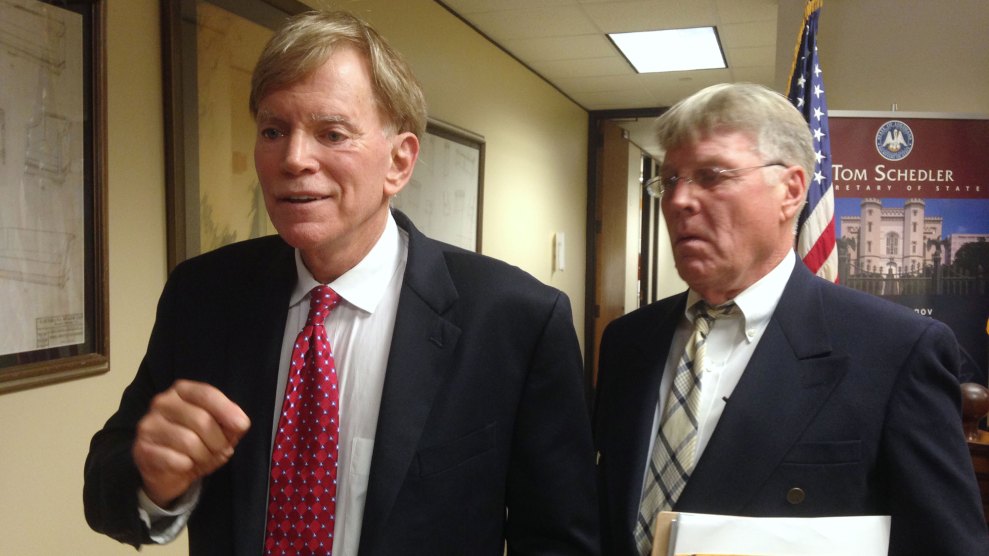 Here’s some good news: David Duke is not going to be a United States senator from Louisiana next year.

The former Ku Klux Klan leader and onetime Louisiana state representative was hoping the rise of Donald Trump could help him resurrect his political career and return to relevance. Instead, more than two decades after his quick rise and steep fall within the Republican party, he was little more than a punching bag. With 77 percent of precincts reporting, he had received 3.4 percent of the vote in a 24-candidate field, falling well short of the threshold to advance to the December runoff. State treasurer John Kennedy and Rep. Charles Boustany, both Republicans, were leading the field although the race had not yet been called.

Duke, a perennial candidate who had launched bids for the House, Senate, and presidency in the 1990s, was attempting to ride the coattails of Trump to new heights when he entered the crowded “jungle primary” last summer. It didn’t happen—although he did, in a fluke, clear the five-percent threshold to appear at the one televised debate, at the historically black Dillard University, prompting massive student protests. (Duke used his brief moment in the spotlight to talk about “CNN Jews.”) But maybe the most important thing about Duke’s candidacy was that it happened at all. He had been humiliated in his final run for office in 1999, and eventually sent to prison for stealing money from his supporters. For much of the last decade he’s been in a self-imposed exile, at one point taking up birding in Austria.

But in 2016, as Trump rode a wave of ethno-nationalism to the Republican nomination, Duke finally felt like it was safe to get back into politics. A lot of his fellow travelers felt the same way. As my colleagues have reported, Trump’s campaign was backed forcefully by a contingent of Neo-Nazis and white supremacists who saw the Republican nominee as a vehicle for their worldview. The campaign avoided denouncing almost any of them. (Trump’s refusal to disavow Duke, whom he had once criticized, would haunt him for the rest of the campaign.)

So Duke got crushed in Louisiana. But the zombies of the Republican Party’s past came back to life in 2016, and Duke and his ilk may not go away any time soon.