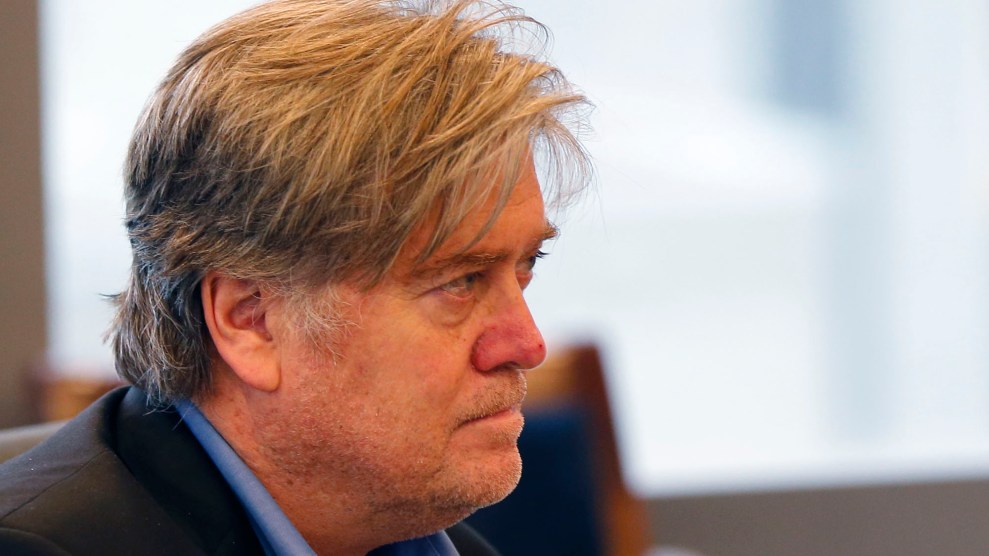 On Sunday afternoon, President-elect Donald Trump named Stephen Bannon, the head of the alt-right website Breitbart, as his chief strategist. Think the next Karl Rove. Except while Rove weaponized the issue of same-sex marriage, Bannon traffics in white nationalism and racism. Republicans are already rushing to normalize Bannon, but having a white nationalist in the White House is not normal.

White nationalists are likely celebrating Bannon’s appointment. As the head of Breitbart, Bannon specifically reached out to the so-called alt-right, a once-obscure white nationalist movement that rose to prominence alongside the Trump campaign. “We’re the platform for the alt-right,” Bannon proudly told Mother Jones at the Republican National Convention in July. Ben Shapiro, a former Brietbart writer turned vociferous critic of Bannon, described the alt-right as a “movement shot through with racism and anti-Semitism” and Breitbart as “a party organ, a pathetic cog in the Trump-media complex and a gathering place for white nationalists.” (Bannon has denied that the alt-right is racist or white nationalist, but Richard Spencer, a leader of the alt-right and a big Trump fan, does not hide his desire to turn the United States into an all-white ethno-state—one in which even Jews would be unwelcome.)

Bannon may deny that Breibart traffics in racism, misogyny, anti-Semitism, and anti-Muslim extremism, but a look at some of the site’s headlines shows that these are the ideologies on which the site built its popularity since Bannon took it over in 2012. It used a picture of Harambe the gorilla for a story about President Barack Obama and birtherism. It ran headlines that include: “Gabby Giffords: The Gun Control Movement’s Human Shield,” “There’s No Hiring Bias Against Women in Tech, They Just Suck at Interviews,” “Birth Control Makes Women Crazy and Unattractive,” “The Solution to Online Harassment Is Simple: Women Should Just Log Off,” and “Bill Kristol: Republican Spoiler, Renegade Jew.”

Bannon himself has embraced anti-Muslim extremists. Before joining Trump’s campaign as CEO in August, he hosted a daily radio show on which he and his guests pushed anti-Muslim conspiracy theories. Trump adviser Roger Stone, for example, warned on Bannon’s show of a future America “where hordes of Islamic madmen are raping, killing, pillaging, defecating in public fountains, harassing private citizens, elderly people—that’s what’s coming.” Hillary Clinton’s close aide Huma Abedin was one obsession of Bannon and his guests because of her Muslim background.

More than anyone, Bannon represents the alt-right’s profound influence over Trump and, through him, the Republican Party. Before Bannon officially joined Trump’s campaign, he was unofficially using Breitbart on Trump’s behalf. The website regularly savaged Republican establishment figures—including conservative Republicans like Paul Ryan—while boosting Trump’s populist, nationalist brand of conservatism. Spencer, the white nationalist leader, sees Bannon as the link between his world and Trump. “I think if Trump wins, we could really legitimately say that he was associated directly with us, with the ‘R[acist]’ word, all sorts of things,” Spencer told Mother Jones this fall. “People will have to recognize us.”

Given all the evidence, it seems this is one of those times we should take the white nationalists at their word.