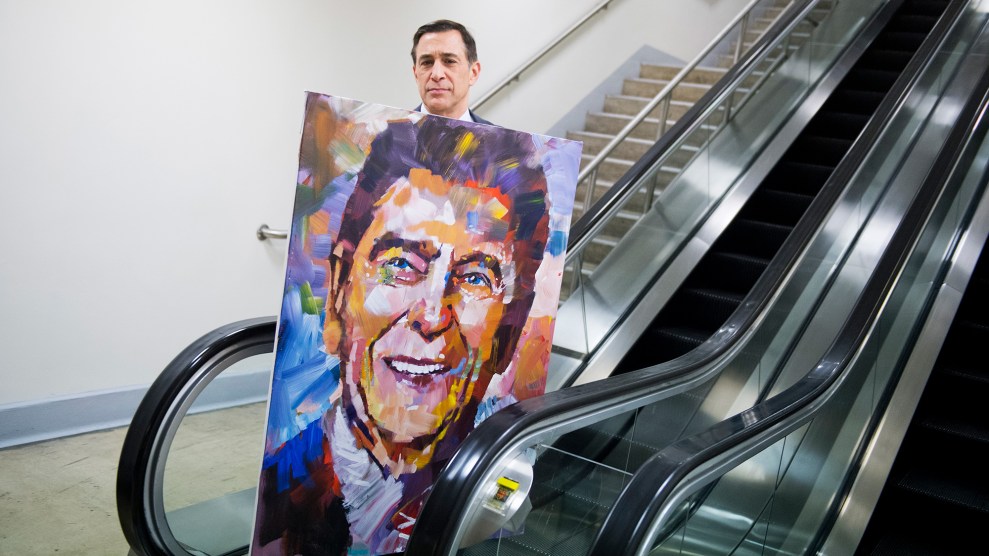 Rep. Darrell Issa with a painting he added to his Ronald Reagan memorabilia collection in 2015.Tom Williams/CQ Roll Call/AP

Days after narrowly winning reelection to his House seat, Rep. Darrell Issa (R-Calif.) is celebrating his victory—by suing his opponent for libel and defamation. The unusual move follows the first time the Southern California Republican faced a serious campaign challenge: He beat Democrat Doug Applegate by just 1,982 votes. The San Diego Union-Tribune reported today that on the day before the election, Issa, known for his role in the Benghazi hearings and for being the richest member of Congress, filed a libel lawsuit against Applegate and his campaign, alleging that two campaign ads damaged his reputation. He is seeking $10 million in damages.

The specter of a wealthy politician pursuing his defeated rival in court recalls Donald Trump’s campaign promise to prosecute and imprison Hillary Clinton if he was elected. But Issa, a Trump supporter, may have a hard time prevailing. First of all, he is the very definition of a public figure, which means he faces a higher burden of proof in a libel case than a private citizen. And, as Peter Scheer, the executive director of the First Amendment Coalition, observes, the Supreme Court has recognized many times that “First Amendment protections for speech are at their very, very, very highest during a political campaign.” Scheer doubts Issa can clear this bar. “This lawsuit doesn’t stand a chance. It’s a waste of the court’s time and it’s certainly a waste of his opponent’s time and money.”

So why bother? Issa may be seeking to set the record straight after an uncomfortably close race. Or, Scheer says, he may be seeking to punish Applegate “by causing him to have to retain counsel, and to spend a lot of money unnecessarily defending a frivolous lawsuit.”

The Union-Tribune noted that Issa’s lawsuit does not detail how exactly he may have suffered $10 million worth of damages as a result of Applegate’s ads. Issa says he’ll donate any damages he wins to charity.

One of the Applegate ads that Issa is suing over cited a 2011 New York Times article titled “A Businessman in Congress Helps His District and Himself.” But the ad also includes what Issa’s lawsuit calls a “fake, doctored headline” that said he had “gamed the system to line his own pockets.” That language wasn’t in the Times article. The article did report that Issa had “secured millions of dollars in Congressional earmarks for road work and public works projects that promise improved traffic and other benefits to the many commercial properties he owns.” (Issa later sold one of those properties at a loss, and the earmarked funds never made it to the road project.)

The second ad that Issa is suing over allegedly misrepresented his stance on funding 9/11 emergency workers. The ad stated that “tea party Republicans voted to deny healthcare to 9/11 first responders.” Issa did in fact vote against the legislation referenced in the ad, but, the lawsuit claims, it was not just tea partiers who voted it down.

Applegate hasn’t yet responded publicly to the lawsuit. On Tuesday, Applegate announced his intention to run again for Congress in 2018.

While Issa’s motivations for filing the suit remain unclear, perhaps he is upset that his own campaign ads didn’t pack the same punch as his opponent’s. As one Republican political operative who asked to remain anonymous told me during the campaign, “I don’t know if you’ve looked at Darrell Issa’s TV ads, but they are the worst fucking TV ads I’ve ever seen in my life.”