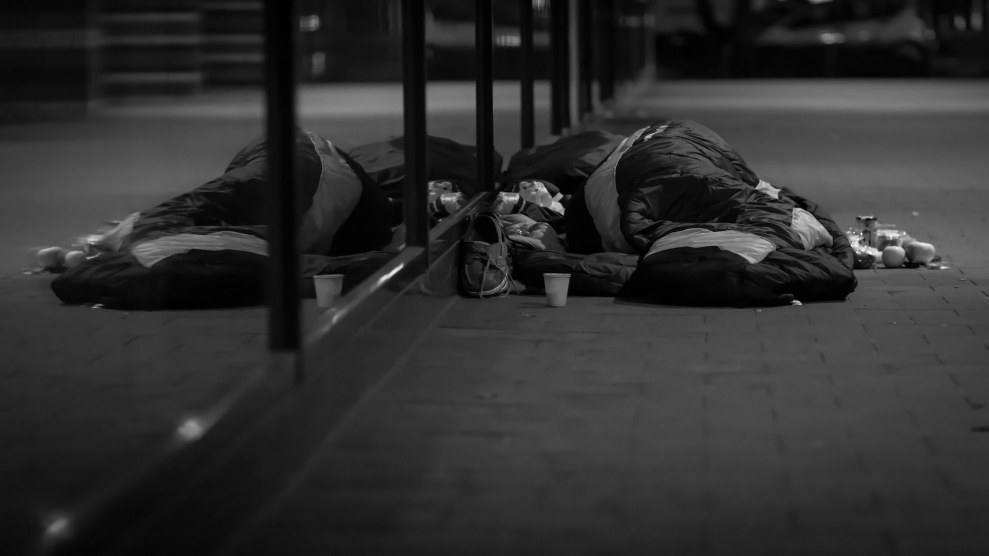 On Saturday, Denver’s mayor, Michael B. Hancock, announced that city police officers would be asked to stop seizing sleeping bags, blankets, tents, and other items that help homeless people keep warm in the winter. The announcement came after a video showing officers confiscating blankets in frigid weather provoked outcry. And while the announcement was a win for Denver’s homeless, Maria Foscarinis, executive director of the National Law Center on Homelessness and Poverty, notes that the seizure or destruction of homeless people’s property is common practice in the United States.

Belongings are often seized under anti-camping laws or laws that prohibit sleeping in public—part of a larger trend of what Foscarinis calls “the criminalization of homelessness.” Earlier this year, her organization released a study tracking the phenomenon in 187 cities. It found that one-third of cities prohibit camping citywide, an increase of nearly 70 percent over a decade ago. But many courts have ruled such practices unconstitutional. Here’s a rundown of what’s happening in a few key cities.

Los Angeles: In March, lawyers sued on behalf of four homeless people whose property was destroyed by the city. One plaintiff, Judy Coleman, was hospitalized for pneumonia after her tent and blanket were taken. The judge in the case issued a preliminary injunction requiring the city to stop seizing homeless people’s belongings during arrests or clean-ups. The order also prohibits the city from storing seized items in a manner that makes them difficult to reclaim—a common problem, according to the Law Center on Homelessness and Poverty. A similar case from 2014 is in the process of being settled out of court.

Meanwhile, the Los Angeles City Council approved a law limiting the storage of items in parks, alleys, and sidewalks to what will fit in a 60-gallon container. Under the law, homeless people may also be cited or arrested if they fail to take down their tents between 6 a.m. and 9 p.m. An LAPD spokesman told me the department is no longer doing sweeps of homeless encampments. The current policy on seized possessions, he says, is to store the items, unless they are too wet or are deemed unsanitary—that determination is left to the officer’s discretion.

Denver: The mayor’s order only applies until April, when officers may resume seizures of bedding and camping gear. In the interim, police still intend to enforce the public camping ban—violators can face fines of up to $999. Back in August, a group called Denver Homeless Out Loud filed a class-action lawsuit arguing that the city’s sweeps are unconstitutional.

Seattle: The city’s regular raids on homeless camps have come under fire due to the loss of personal property and the city’s failure to give homeless residents proper notice. Seattle has been embroiled in an ongoing debate about how best to handle its sweeps, some of which have been halted by city civil rights monitors because the approved protocols were not followed.

San Francisco: Homeless sweeps are common in San Francisco. According to Mission Local‘s examination of the Department of Public Works records, the city only preserved 23 people’s seized belongings over a six-month period this year. On Tuesday, Bay Area civil rights groups filed a class-action lawsuit against the California Department of Transportation over the seizure of items such as stoves, tents, and bedding by Caltrans employees.

Honolulu: Though winter survival is less of a problem in Hawaii, Foscarinis points out that homeless people are also at risk in warm weather when their belongings are essential to keeping cool. In a survey of homeless residents by the Department of Urban Planning at the University of Hawaii-Manoa, nearly 60 percent reported losing personal identification, 40 percent lost tents, and 21 percent lost medicine in sweeps. The National Law Center on Poverty and Homelessness report stated, “The city has been transparent about its goal of removing Honolulu’s homeless population from view” and has proposed to “relocate homeless people to a separate island that previously served as a garbage dump and former internment camp during WWII.”