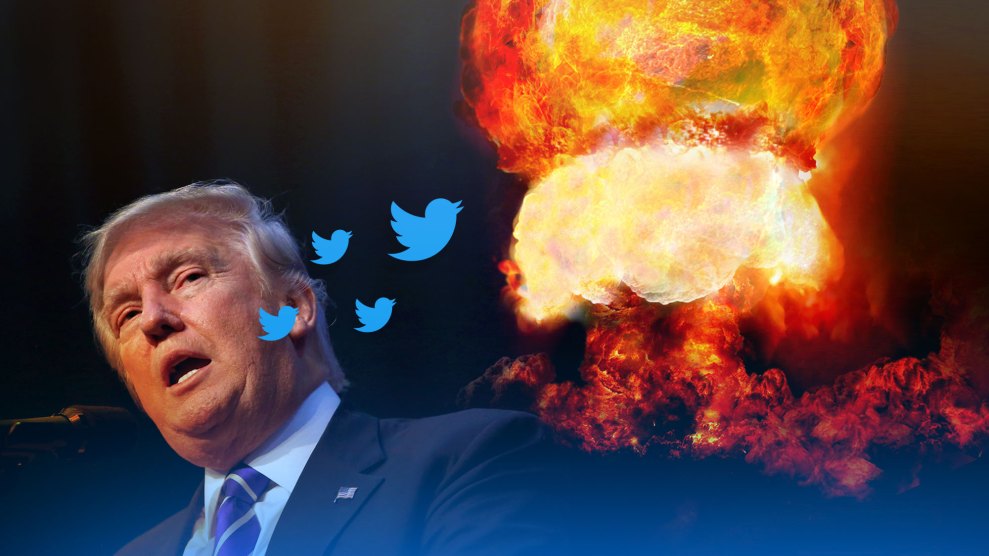 With one tweet on Thursday, Donald Trump proved how dangerous and unstable his presidency could be.

Out of the blue, Trump weighed in on one of America’s most important national security issues: nuclear weapons. He tweeted:

In just 118 characters, Trump seemed to be reversing decades of bipartisan policy aimed at stopping the spread of nuclear weapons around the world. For decades, the United States has worked with Russia, the other major nuclear power, to reduce both nations’ nuclear arsenals. Richard Nixon, Jimmy Carter, Ronald Reagan, George H.W. Bush, Bill Clinton, George W. Bush, and Barack Obama have each negotiated treaties with Russia reducing nuclear stockpiles. Today, the United States and Russia  each possess about 7,000 nuclear weapons, and there continue to be efforts to shrink these stockpiles.

Yet with a single tweet, Trump suggested he would move in the opposite direction and expand the US nuclear arsenal. To what end? Trump did not follow up with any other thoughts. But many experts contend that nuclear weapons will not bring greater security to the United States, given that the greatest risks these days come from nonstate actors, crises in the Middle East, and cyberwarfare.

Moreover, global efforts to prevent the proliferation of nuclear weapons—as enshrined in the international Non-Proliferation Treaty—are predicated on Washington and Moscow collaborating to downsize their nuclear arsenals. By declaring that the United States would enlarge its nuclear arms collection, Trump was undermining the attempts to stop the spread of these weapons throughout the world.

The Trump team’s response did not make the situation any better. Spokesman Jason Miller issued a statement saying Trump was referring to “the threat of nuclear proliferation and the critical need to prevent it—particularly to and among terrorist organizations and unstable and rogue regimes.”

Uh, no, he wasn’t. And, still, this was an illogical point. Adding more nukes to the US stockpile will hardly stop terrorists or rogue regimes from seeking to acquire nuclear weapons. Miller was replying with a non sequitur.

Joe Cirincione, president of the Ploughshares Fund and a nuclear arms expert, says, “Can a tweet start and arms race? This one just might have.” He adds, “There are groups like Heritage [Foundation] arguing to expand our nuclear arsenal. If Trump was reflecting their thinking for not just new weapons but more weapons and new missions, we are entering new and very dangerous territory.”

With this tweet, Trump gave new fuel to two questions: whether he intends to drastically change US policy on nuclear arms control, and whether he and his team are capable of handling serious matters. It doesn’t get much more serious than nuclear weapons, and here was Trump seemingly shooting from the hip, without any apparent deliberation, on a critical national security matter—and with his staffers then forced to issue a nonsensical statement to back him up. It was clown time…with nuclear weapons.

Trump has suggested in years past that he believes a nuclear war is inevitable. So any tweet from him on this subject deserves great scrutiny—at least as much as his tweets about Alec Baldwin, SNL, and the musical Hamilton. The posting of this tweet, and his staff’s inability to explain it, are frightening signs that Trump is not ready for the task of controlling weapons that can destroy the world.