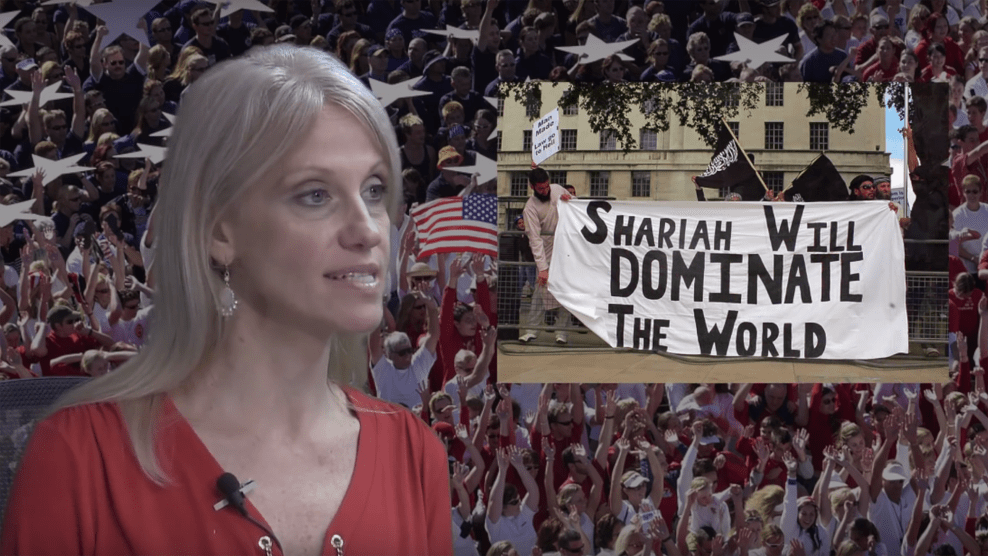 When Donald Trump in August hired Steve Bannon as his campaign CEO and Kellyanne Conway as his campaign manager, many in the media quickly zeroed in on Bannon, noting that Breitbart News, the conservative website he ran, was a platform for white nationalists and anti-immigration and anti-Muslim fearmongering. But Conway—a pollster best known for helping GOP candidates appeal to women—has her own ties to anti-Muslim conspiracy theorists and nativist opponents of immigration.

After years in the political wilderness, extremist groups have gained new relevance, thanks to Trump’s victory. But Conway, who is now a senior adviser to the president-elect and is likely to run an outside group to support Trump’s agenda, has for years done work for some of these organizations, lending her polling expertise to their causes and helping them shape their messaging.

Following the Paris terrorist attacks in late 2015, then-candidate Trump announced his plan to ban all Muslims from entering the United States until US leaders “can figure out what is going on.” To justify his proposal, he cited a flawed poll from June 2015 that portrayed American Muslims as increasingly radical. According to this poll, 51 percent of Muslims in the United States believe they should have the choice to be governed by Shariah law (Islamic religious law) instead of US laws, and nearly 20 percent believe “the use of violence in the United States is justified in order to make Shariah the law of the land in this country.”

Conway’s firm, The Polling Company, conducted this poll for the Center for Security Policy, a think tank run by Frank Gaffney, a former Reagan administration defense official. Gaffney is a right-wing extremist who frequently pushes wild conspiracy theories and has often been at odds with other conservative leaders. He’s claimed there is “mounting evidence” that President Barack Obama is a secret Muslim; alleged that Hillary Clinton aide Huma Abedin has ties to the Muslim Brotherhood (Gaffney’s think tank claimed Abedin is one of six Muslim Brotherhood operatives working inside the Obama administration); and suggested the federal government, the media, and the financial sector have all been infiltrated by “Shariah-adherent” Muslims. (One of Gaffney’s Islamophobic themes is conflating radicalism with adherence to Islamic religious law).

Gaffney has also been part of Groundswell, a DC-based group of conservative advocates, which included Bannon, that has plotted strategies for injecting far-right messages into the national political discourse. Before joining Trump’s campaign, Bannon, as chairman of Breitbart News, hosted Gaffney on his daily radio show 29 times.  Gaffney also has been a frequent columnist at Breitbart. The Southern Poverty Law Center calls Gaffney “one of America’s most notorious Islamophobes.” Gaffney is not part of Trump’s transition team, but he has expressed hope that his ideas will help guide the president-elect. He is a fringe figure, but his voice has been amplified in the age of Trump.

In June 2015, Conway appeared on Gaffney’s podcast, Secure Freedom Radio, to discuss the poll about American Muslims. “It’s very alarming to me that such a high number of individuals, Muslims living in the US, would say, ‘Well, we can have a choice,'” as to whether to follow Shariah law or US law, she told Gaffney. She expressed alarm that some respondents believed the religious practice of jihad had a violent component. (In mainstream Islam, jihad refers to efforts to support the faith, not violent actions.) She said her online survey had caught “over a quarter” of respondents “admitting…that this is not a personal peaceful struggle.”

Conway continued: “And I think this is important because the answer from lots of folks always is, ‘Look, don’t cast a wide net and call all Muslims nonpeaceful and violent and adhering to jihad and Shariah and bloodthirsty.’ Fine. However, look at the data. The Muslims living in the US themselves—27 percent of them, anyway—say that this is what the purpose of jihad is, to either punish nonbelievers (16 percent) or, the other 11 percent, to undermine non-Muslim states.”

“FAIR began working with Kellyanne Conway as far back as 1996, and we have used her for polling virtually every year since then.”

But her poll had serious methodological problems. Most notably, it was an opt-in online poll, not a random sampling of Muslims in the United States. That means it was not scientific and wasn’t a reliable indicator of American Muslims’ attitudes as a whole. On its website, the American Association for Public Opinion Research cautions that opt-in polls “may not be reliable” and warns that “this type of sample is not based on the full target population.” Regarding Conway’s poll, Democratic pollster Mark Mellman wrote last year, “One cannot say that it represents the views of American Muslims. For many, that fact is sufficient to dismiss the poll.” Mellman also took issue with how the poll questions were worded, contending that they were vague and misleading and designed to make American Muslims appear radical. “In short,” he wrote, Conway’s polling company and Gaffney’s group “created an issue where none is apparent, except perhaps to a small minority.”

After Trump publicized this poll a year ago with his proposed Muslim ban, a representative of Conway’s firm, speaking anonymously to New York magazine, essentially trashed the poll: “As this poll was conducted among an online group of opt-in respondents, we did not publish a margin of error or otherwise advise our client that the data were statistically representative of the entire US Muslim population.” In other words, the poll had no real statistical value. Yet that hadn’t stopped Conway from claiming that a significant number of Muslims in the country were extremists.

This unscientific poll of US Muslims was not the first time that Conway’s firm had done work for Gaffney’s group. Old articles on the Center for Security Policy website show The Polling Company conducting surveys for the think tank as early as 1998. She had also previously appeared on his podcast, at Center for Security Policy events, and in videos promoting her polling on the think tank’s website.

On the immigration front, Conway’s polling firm has worked for years for the Federation for American Immigration Reform, a group that seeks to dramatically reduce immigration into the United States and deport undocumented immigrants. The Southern Poverty Law Center has labeled FAIR an anti-immigrant hate group, citing its alleged connections to white supremacists. FAIR’s founder, John Tanton, stated in 1993 his preference for the United States to have a “European-American majority, and a clear one at that.” Tanton served on FAIR’s board of directors until January 2011 and remains on what the group calls its “National Board of Advisors.” A spokesman for FAIR, Ira Mehlman, told Mother Jones that the Southern Poverty Law Center “has a long history of just labeling political opponents” and that FAIR has a “solid history and reputation.” FAIR denies that it is a hate group.

In late November, FAIR held a press conference in Washington, DC, unveiling its immigration policy recommendations for the Trump transition team and incoming administration. The conference was a victory celebration for the group, which had been relegated to the fringes by both Democrats and Republicans for decades. Now, FAIR’s leaders believe they finally have an ally in the White House. Several Trump advisers, including Conway, have deep ties to FAIR.

Conway has regularly conducted polling, opinion research, and focus groups for FAIR, and the group says her presence on the Trump campaign bolstered his hardline position on immigration. “FAIR began working with Kellyanne Conway as far back as 1996, and we have used her for polling virtually every year since then,” Dan Stein, FAIR’s president, said. “We take it as a certain amount of personal pride, is that when she became the campaign manager for Donald Trump—first successful woman to lead, you know, a successful presidential campaign—she was possessed of intimate professional knowledge of the immigration issue as it related to the voter concerns. And we saw that influence helping to shape Donald Trump’s positions and statements once she came on board.”

Conway has also done work for two other outfits in Tanton’s network: the Center for Immigration Studies and NumbersUSA. The Southern Poverty Law Center has called FAIR and these other groups the “core of the nativist lobby in America.” Roy Beck, the president and co-founder of NumbersUSA, says his group “abhorred that label,” and he maintains that NumbersUSA opposes nativism. He confirmed that Conway has conducted polling for his organization “off and on for over 15 years.” The group’s website features several polls from Conway’s firm. Like FAIR’s Stein, Beck believes that Conway influenced Trump on immigration. Her polling for NumbersUSA, he explained, had focused on the supposed impact of immigration on American workers, and Beck contends Trump emphasized this argument in the final months of the race.

Brett Loyd, a representative of Conway’s firm, told Mother Jones, “Our work for FAIR, or any other client, has been to conduct research, not advocate nor lobby.” Regarding the Gaffney’s group and NumbersUSA, specifically, Loyd said The Polling Company “has no current working relationship with either group, nor did we during this election cycle.”

When Trump brought Conway into his campaign, political observers noted that with her expertise on gender politics, she could help a candidate who was prone to provocative comments and was having trouble winning over women voters. Compared with Bannon, she was seen as a mainstream voice, and there was speculation about whether Conway, Trump’s third campaign manager, could be effective given that Trump’s two previous managers had lost their positions. But Conway survived and thrived as Trump’s chief. Perhaps one reason she ended up fitting in so well was all that time she had spent working with some of the more extreme voices on the right.