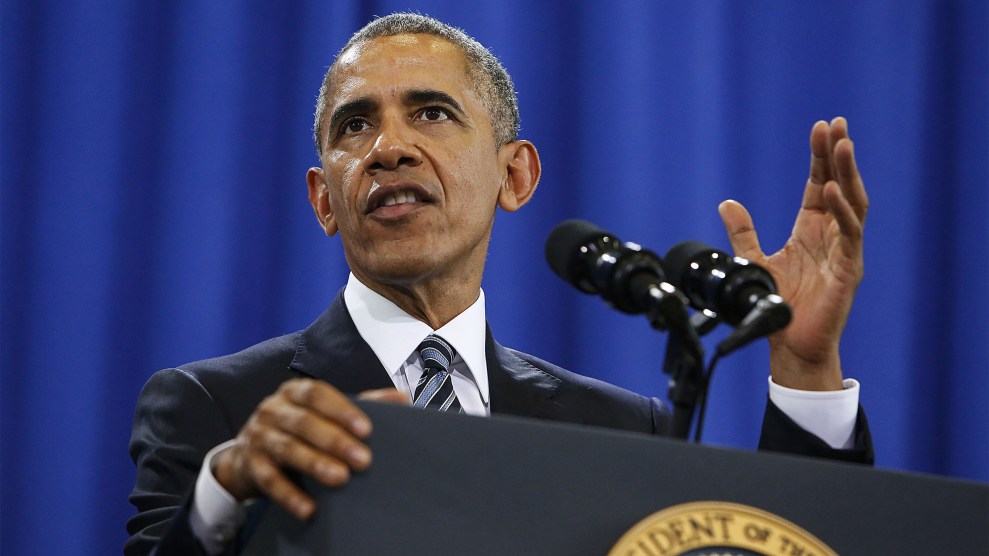 In response to alleged Russian hacking of US political targets, President Barack Obama said during a press conference on Friday that the US government will “continue to send a message [to Russia] to not do this to us because we can do stuff to you.”

Obama, in his last press conference of 2016, defended his administration’s response to the hacks, saying that in the “hyperpartisan atmosphere” of the US presidential election “my primary concern was making sure that the integrity of the election process wasn’t damaged.” He told reporters that he wanted to ensure that the election proceeded without the impression that his administration was trying to tip the scales in favor of either candidate. “The truth of the matter is that everybody had the information,” he said. “It was out there, and we handled it the way we should have.”

Now that the election is over, Obama said his administration will fashion a response to the hacking that will send a message to the Russian government. He said some of this response would be public, but that part would play out “in a way they know but not everybody will.”

“At a point in time where we’ve taken certain actions that we can divulge properly, we will do so,” Obama said.

Obama also downplayed the value of an overt response: “The idea that somehow public shaming is going to be effective I think doesn’t read the thought process in Russia very well,” Obama said.

The press conference comes on the heels of numerous media reports, citing unnamed intelligence officials, detailing Russia’s alleged role in hacking US political targets, including the Democratic National Committee and Clinton campaign chairman John Podesta. Last week, the Washington Post reported that the CIA had concluded that the Russian government had mounted the hacks in an effort to sway the election in favor of Donald Trump. The New York Times has laid out how the US government thinks the hacks played out. NBC has reported that intelligence officials believe that Vladimir Putin himself oversaw the hacking operation. Just before Obama spoke, the Post reported that the FBI now agrees with the CIA’s assessment that the Russian hacks were designed to help Trump.

Obama said the intelligence community will produce a final assessment on the hacks before he leaves office, and that he doesn’t want to get ahead of the report’s conclusions. But, when pressed, he alluded to Putin’s direct involvement.

“Not much happens in Russia without Vladimir Putin,” he said. “This is a pretty hierarchical operation. Last I checked, there’s not a lot of debate and democratic deliberation, particularly when it comes to policies directed at the United States.”

Trump has consistently downplayed the accusations against Putin and Russia, calling the CIA assessment “ridiculous,” and he has claimed the allegations of Russian political interference in the presidential election are politically driven.

At a dinner with donors on Thursday, Hillary Clinton said Putin directed the hacks “because he had a personal beef against me,” one that originated after she questioned the fairness of parliamentary elections held in Russia in 2011. “Putin publicly blamed me for the outpouring of outrage by his own people,” she said, “and that is a direct line between what he said back then and what he did in this election.” On Thursday night, Podesta published an op-ed in the Washington Post arguing that something is “deeply wrong with the FBI” and calling for an airing of as much evidence as can safely be made public about the hacks, along with a full, independent investigation into the matter.

In an interview with NPR’s Steve Inskeep on Thursday, Obama vowed to retaliate against Russia.

“I think there is no doubt that when any foreign government tries to impact the integrity of our elections, that we need to take action,” he said in the interview. “And we will at a time and place of our own choosing. Some of it may well be explicit and publicized, some of it may not be.” Obama said his administration has “been working hard to make sure that what we do is proportional, that what we do is meaningful.”

It’s unclear what form US retribution could take. Michael Daniel, a special assistant to the president and the White House cybersecurity coordinator, told Cyber Scoop on Friday that “the US government is still pulling together” a response to the hacks.

Discussing the impact of the hacks during his press conference on Friday, Obama said Russia can only weaken the United States if Americans let it happen. “The Russians can’t change us or significantly weaken us,” Obama said. “They are a smaller country, they are a weaker county, their economy doesn’t produce anything that anyone wants to buy except oil, gas, and arms, they don’t innovate. But they can impact us if we lose track of who we are, if we abandon our values.”

This is a developing story.