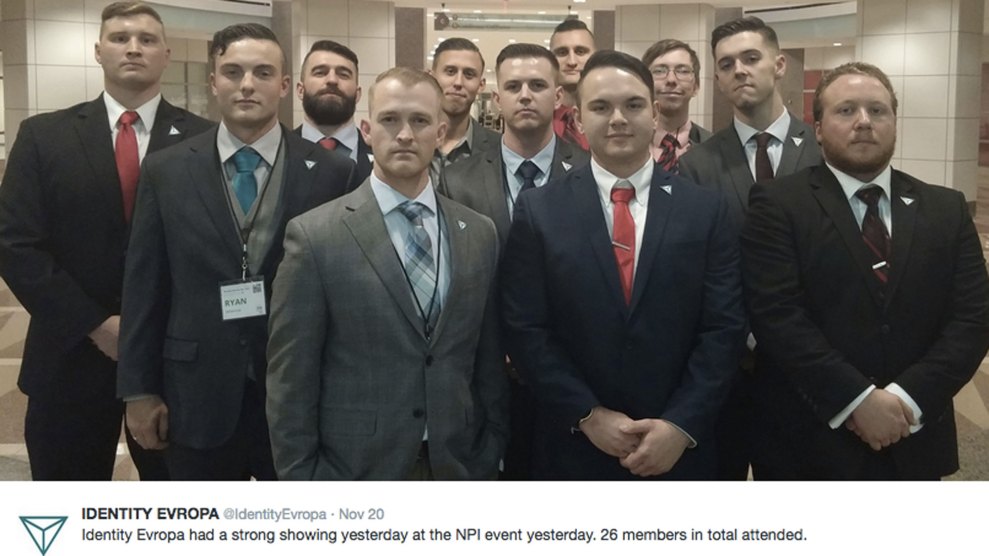 How much support is there for the loose-knit coalition of white nationalists and other far-right extremists known as the “alt-right”? Despite a spike in media coverage for the movement in the wake of Donald Trump’s victory, a recent conference hosted by white nationalist Richard Spencer, who coined the term “alt-right,” drew only about 275 attendees in Washington, DC. And after a video from the event went viral, showing audience members giving Nazi salutes to Spencer’s cry of “hail Trump,” the movement faced a fierce backlash. Although Trump named alt-right hero Stephen Bannon as his chief White House strategist, the president-elect went on to disavow the alt-right—in general terms, at least—in an interview with the New York Times.

The movement gained momentum online in 2016 but is no longer just about social media, says Spencer; he sees a need to prove that the alt-right can attract supporters in the real world. And he says the best place to do that is on college campuses, starting with a speech he plans to deliver on Tuesday on the campus of Texas A&M University. “People in college are at this point in their lives where they are actually open to alternative perspectives, for better and for worse,” Spencer says. “I think you do need to get them while they are young. I think rewiring the neurons of someone over 50 is effectively impossible.”

In May, Spencer and other white nationalists set up a “safe space” on the University of California-Berkeley’s Sproul Plaza to discuss “how race affects people of European heritage.”

Recruiting on college campuses has long been a goal for “academic racists” such as Jared Taylor and Peter Brimelow, a white nationalist whom Spencer helped bring to Duke University for an event in 2007, when Spencer was a student there. In May, Spencer and other white nationalists set up a “safe space” on the University of California-Berkeley’s Sproul Plaza to discuss “how race affects people of European heritage.” He claims that he will be giving two more speeches about the alt-right at universities in California. “The left just owns academia through and through,” Spencer says, “so I think it is important to go to the belly of the beast and not let them own it.”

In recent months, Breitbart News pundit Milo Yiannopoulos’ “Dangerous Faggot Tour” drew crowds at college campuses around the country. Several colleges canceled scheduled talks by Yiannopoulos because of “security concerns.” Yiannopoulos does not label himself “alt-right” but has characterized the movement as a legitimate response to political correctness. He often describes white males as victims of “reverse discrimination” and speaks euphemistically of defending “Western values.” A talk that he gave on the alt-right at the University of Houston in September drew cheers and a chant invoking the name of the alt-right mascot Pepe the Frog.

“That was a revelation for me,” Spencer said about Yiannopoulos’ talk. “What we are doing is known to people, it’s edgy and dangerous, it’s cool and hip. It’s that thing our parents don’t want us to do. So that was definitely a huge inspiration.”

University campuses historically have incubated a range of social movements, from Marxism to multiculturalism on the left to right-wing movements such as neoliberalism and fascism, including Nazism in Germany (and in the United States).

More recently, several groups sympathetic to the alt-right have cropped up on some college campuses:

Identity Evropa
Identity Evropa describes itself as “a generation of awakened Europeans who have discovered we are part of the great peoples, history, and civilization that flowed from the European continent” and who “oppose those who would defame our history and rich cultural heritage.” Founded in February by 30-year-old ex-Marine Nathan Damigo, a junior social science major at California State University-Stanislaus, the group has been active on several California campuses. Its supporters have plastered campuses and downtown areas with posters featuring slogans such as “Let’s Become Great Again” and “Serve Your People” superimposed over images or European Renaissance art.

Most college professors who teach classes about race and identity “haven’t done their homework,” says Damigo, who, like Spencer, promotes pseudoscientific theories about cognitive differences between the races. Most of his members, he says, are recent college graduates who discovered racialist ideas on their own and now aim to “mentor” younger students while “waging a culture war” on the ivory tower: “We want to have a constant presence there,” he says. “We want to normalize our ideas and get to the point where we can push faculty into incorporating this literature into the lectures and into the educational program.” In November, Damigo and more than two dozen Identity Evropa members attended Spencer’s conference.

Traditionalist Youth Network
As a student at Maryland’s Towson University in 2012, Matthew Heimbach founded a “white student union.” The group conducted night patrols to look for “black predators,” according to Vice, and brought “race realist” Jared Taylor to speak on campus. Another white student union was formed in 2013 by Georgia State University student Patrick Sharp, an active member of the neo-Nazi website Stormfront. The “white student union” model has been promoted by alt-right media outlets; since then, more than 30 white student union pages have popped up on Facebook, though many are believed to be hoaxes.

After graduating in 2013, Heimbach and his father-in-law founded the Traditionalist Youth Network, a white nationalist group cloaking itself in “traditionalism” that has allied with neo-Nazi and neo-Confederate groups, according to research from the Southern Poverty Law Center. In June, members of the TYN’s affiliated Traditionalist Worker Party joined the group Golden Gate Skinheads for a demonstration in Sacramento that turned violent, sending five people to the hospital with stab wounds.

Like other figures affiliated with the alt-right, Heimbach idolizes Russian President Vladimir Putin. “Russia is our biggest inspiration,” he recently told the New York Times. “I see President Putin as the leader of the free world.”

Students for Trump
Though the campus group Students for Trump ostensibly focused on electing and supporting Trump, at least one chapter has openly embraced white nationalist rhetoric and causes. The Facebook page of the group’s Portland State University chapter posted an infographic called “What Does White Genocide Look Like,” “White Lives Matter” memes, and a quote from former Rhodesian Prime Minister Ian Smith about how “colonialism is a wonderful thing.” In a counterprotest to a student union demonstration against arming campus police, Students for Trump held up signs reading “Thug Lives Don’t Matter.” PSU Students who spoke out against Students for Trump were reportedly targeted online by anonymous accounts with racist slurs and death threats, according to ThinkProgress.

Campuses have mostly stopped short of banning such groups, opting instead to counter them with protests and educational efforts. Texas A&M University is hosting a counterevent Tuesday called “Aggies United” at its football stadium featuring musicians and activists. “I find the views of the organizer—and the speaker he is apparently sponsoring—abhorrent and profoundly antithetical to everything I believe,” the university’s president, Michael Young, said in a letter to the campus community last week. “In my judgment, those views simply have no place in civilized dialogue and conversation.” But, Young added, “we have no plans to prohibit the speaker from using the room he has rented. Freedom of speech is a First Amendment right and a core value of this university, no matter how odious the views may be.”