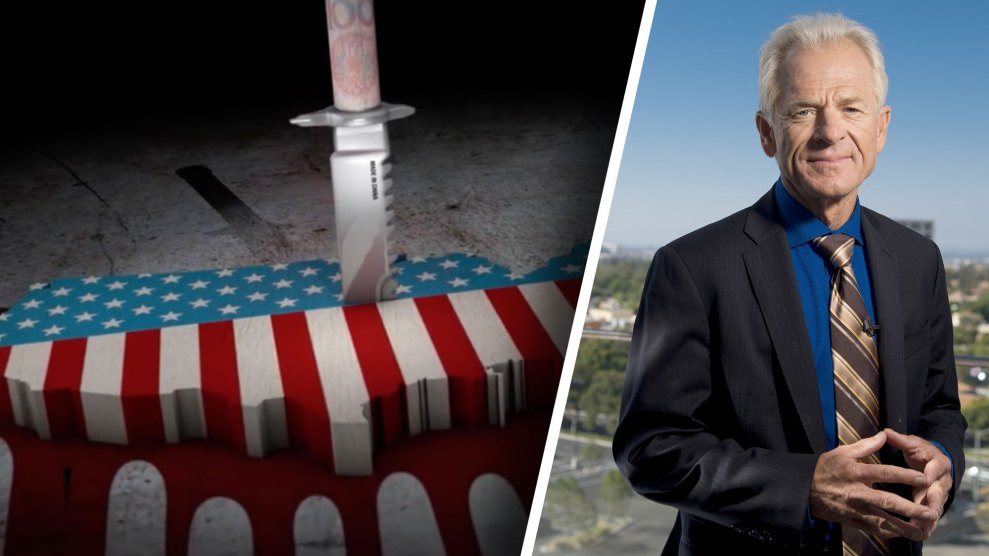 A scene from the film "Death By China"; Navarro: Leonard Ortiz/The Orange County Register via ZUMA

On Wednesday, President-elect Donald Trump appointed economics professor and outspoken China critic Peter Navarro to a new White House position that will oversee trade and industrial policy. Navarro, a Trump campaign adviser, advocates a more adversarial approach to China, including a controversial 40-plus percent tariff on Chinese imports. He’s also the author of numerous books about what he sees as China’s existential threat to global order, including The Coming China Wars (one of Trump’s favorite China books.)

Navarro “has raised some important critiques of American trade policy and we look forward to working with him to translate that into real policies,” says the AFL-CIO.

Navarro’s appointment was met with something akin to optimism by the country’s biggest labor organization. In a statement to Mother Jones Thursday, AFL-CIO spokesman Josh Goldstein said Navarro “has raised some important critiques of American trade policy and we look forward to working with him to translate that into real policies that benefit America’s workers.”

The 12.5 million-member federation of labor unions opposed Trump during the campaign, painting him as a fraud. “Look at what he does, not what he says,” warned AFL-CIO President Richard Trumka in June, labeling Trump the “king” of outsourced labor. “When you give working-class people the facts, I think [Trump] falls apart,” Trumka said in a March interview with the Washington Post. “He’s a house of cards.” The AFL-CIO actively campaigned for Hillary Clinton; in its endorsement of her, the union called Trump an “unstable charlatan who made his fortune scamming” working families.

The AFL-CIO even released a YouTube video using Navarro’s own words to attack Trump:

Navarro is a University of California-Irvine a professor of economics and public policy who became an economics adviser to Trump during the campaign. In October, The New Yorker referred to him as “Trump’s muse” on trade with China and said he was poised to become “the single most powerful economic adviser in the United States” should Trump win the presidency.

“Donald Trump is going to run the table with organized labor and with non-union labor,” Navarro predicted in June.

Navarro’s relationship with the AFL-CIO is a bit complicated. During the campaign, he routinely claimed that union workers in states like Ohio would line up behind the Republican real estate mogul, despite opposition from top brass at the labor group. “Donald Trump is going to run the table with organized labor and with non-union labor,” he told MSNBC’s Chris Matthews in June, arguing that union leaders had contradicted themselves by supporting Clinton. “AFL-CIO opposed [China’s] World Trade Organization entry,” he said. “AFL-CIO opposed the South Korea trade deal. Hillary Clinton supported all those.” (He was right: According to exit polls, 54 percent of Ohio voters from union households voted for Trump. In 2012, just 37 percent voted for Mitt Romney.)

But it wasn’t long ago when the AFL-CIO leadership was very much behind Navarro’s work. In 2012, the union group sponsored several screenings of Navarro’s film Death by China in towns across Ohio. The film is a polemic documentary, narrated by Martin Sheen of The West Wing, that traces the loss of American manufacturing jobs to the rise of China. In particular, Navarro points to China’s admission to the World Trade Organization in 2001 and to what he sees as dangerous concessions that US officials have made to a dictatorial, unaccountable country waging a trade war with America.

In a way, Navarro’s film foreshadowed the 2016 contest between Clinton and Trump—especially in the Rust Belt states of the upper Midwest. His goal at the time, however, was to make trade with China the No. 1 issue for Ohio voters in the 2012 election between Romney and President Barack Obama. “My view is that whoever wins Ohio will win the presidential race,” Navarro said in August 2012. “Our objective going into Ohio is to elevate the issue of trade reform with China to the top of the checklist of presidential campaign issues.” (Navarro did not respond to a request for comment.)

The film screenings may have been aimed at union members in the Rust Belt, but Navarro’s documentary attracted another a big fan, as well. “Death by China is right on,” Trump wrote in a short blurb for the film on its website. “This important documentary depicts our problem with China with facts, figures and insight. I urge you to see it.”

Trumka, the AFL-CIO president, actually appeared in the film, as a vocal critic of US-China trade policy. “This is an economy that has been made by policy choices, policy choices that really do benefit the rich and the multinationals,” he tells viewers. “Their interests no longer coincide with the interests of this country, so we have to do what’s best for this country.” (The film also features Rep. Tim Ryan, the Ohio Democrat who recently challenged Nancy Pelosi for the House minority leader post.)

Trump’s Navarro appointment comes as tensions between the United States and China appear to be ratcheting up. Earlier this month, the Chinese Defense Ministry confirmed photos showing the country had installed military weapons, including anti-aircraft guns, on contested islands in the South China Sea, something the Obama administration regards as an act of territorial aggression. In November, China flew a nuclear-capable bomber over the South China Sea, according to Fox News. That action came after Trump spoke with Taiwan President Tsai Ing-wen, breaking decades of US protocol. Last week, China seized an unmanned underwater research drone from a US Navy operation near the Philippines, prompting strong protests from Washington. (China has since given it back, though Trump suggested on Twitter that China should keep it.)

Trump’s new trade staffer seems likely to raise the stakes. Navarro calls Taiwan a “beacon of democracy” and argues that the US should “stop sacrificing friends like Taiwan to placate what is increasingly morphing from a trading partner and strategic rival into a hostile enemy.” China, for its part, is cautiously weighing its response to the appointment, at least for the moment. But something more forceful might be just over the horizon, according to a Wall Street Journal interview with Gary Hufbauer, a former Treasury official and fellow at the Peterson Institute for International Economics. “Their objective will be to parry what Trump does with targeted reprisals in areas of US vulnerability,” he said. There are a number of potential ways in which China could use its own trade policies to impede Trump’s quest to make America great again, Hudbauer argues, including placing sanctions on American farm exports or canceling big deals with Boeing.