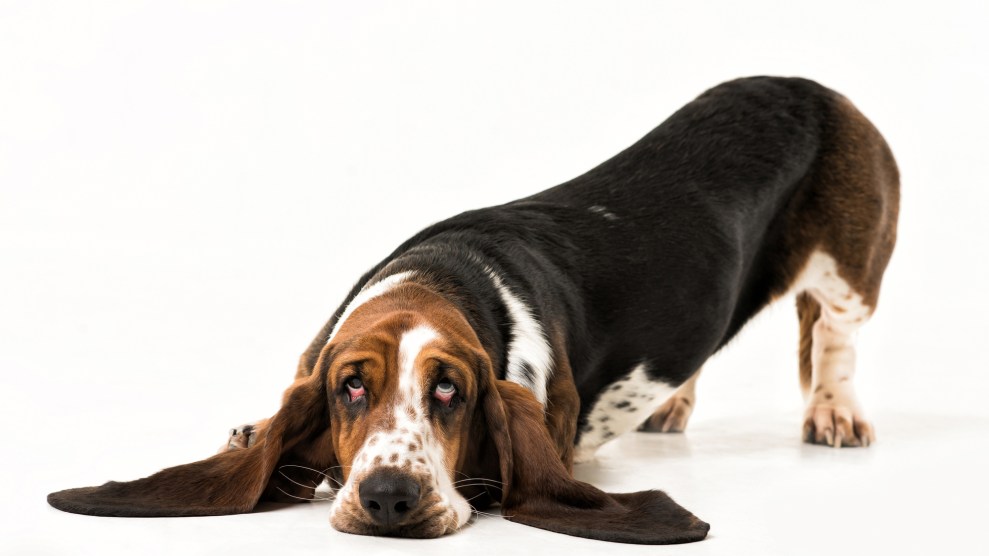 Update (12/13/2016): The buzz around Heidi Heitkamp as USDA chief continues to dissipate—Politico reports that “Donald Trump’s closest rural advisers are trying to torpedo” the push to choose her; and speculation that she would turn down the offer anyway is mounting. Meanwhile, Breitbart News, a far-right online journal whose former executive chair is a top Trump adviser, is pushing Rep. Timothy A. Huelskamp (R-Kansas), who lost his primary race this year and will soon be available for a new job. Huelskamp, a tea party stalwart, would represent quite a departure from Heitkamp.

Like a calf lurching about a rodeo field to evade a rope, President-elect Donald Trump’s transition has taken a chaotic course. And nowhere is that truer than at the US Department of Agriculture, the sprawling agency that oversees everything from food aid programs to farm policy to food safety at meat inspection plants.

I asked Paul Shapiro, vice president for farm animal protection at HSUS, whether his group opposes the keeping of pets. “That would certainly be news to the vast numbers of our staff who bring their dogs to work here,” he replied.

On Saturday, Politico reiterated a rumor that’s been circulating for weeks that Sen. Heidi Heitkamp (D-N.D.) is Trump’s likely pick to take the USDA helm. Wait, a Democrat? She was a big supporter of the 2014 reauthorization of the farm bill, the twice-a-decade legislation that shapes US food and ag policy. Like all farm bills since the 1980s, this one was generally Big Ag friendly, but Heitkamp supported some measures that contradict meat industry interests, which seem to hold plenty of sway at Trump Tower. She took credit for “beat[ing] back efforts to repeal Country of Origin Labeling,” which tells consumers where their meat is raised and is hated by big meatpacking companies. She also helped fend off an effort to kill the farm bill’s Grain Inspection, Packers and Stockyards (GIPSA) Act rules, which charge the USDA with curbing the market power big meat-packers can deploy against farmers. Nor has Heitkamp particularly been a magnet for ag industry cash, though she has only run one campaign for federal office. But she’s a conventional Democratic farm state senator, not an ag radical.

Choosing a centrist Democrat like Heitkamp would be quite a departure from earlier versions of Trump’s USDA short list, which included wild cards like Texas Agriculture Commissioner Sid Miller, who unapologetically shares fake news stories on his office’s Facebook page and once tried to bill taxpayers for a trip to take a medical procedure called a Jesus shot. Charles Herbster has also appeared as a prime candidate for USDA chief—he’s a man who currently runs a a multilevel marketing operation (a highly controversial business model that relies on a network of individual “distributors” to sell products) and who finances and helps lead a Big Ag federal super-PAC also funded by Monsanto, DuPont, Archer Daniels Midland, and other agribusiness giants.

Indeed, a day before the Politico piece hailing Heitkamp as the likely pick, Trump veered in a quite different direction, announcing a new member of the team overseeing the transition of the USDA: Brian Klippenstein, executive director of a group called Protect the Harvest. The brainchild of Forrest Lucas—a right-wing oil magnate and cattle rancher who has himself emerged as a contender to serve as Trump’s secretary of the interior—Protect the Harvest seems to exist mainly to troll the Humane Society of the United States.

On its website, Protect the Harvest warns that HSUS seeks to “put an end to animal ownership.” This is nonsense—the Humane Society is by no means coming for your furry friend. Its website features “tools you need to help the pets in your home and beyond.” I asked Paul Shapiro, vice president of policy at HSUS, whether his group opposes the keeping of pets. “That would certainly be news to the vast numbers of our staff who bring their dogs to work here,” he replied.

Protect the Harvest’s real beef with HSUS appears to be that the group promotes legislation that curtails some of the harsher aspects of factory-scale animal farming. The two groups recently clashed over a Massachusetts ballot measure this fall to ban tight cages in egg and pork production. Lucas personally donated nearly $200,0000 to defeat the measure, and Klippenstein actively campaigned against it. The measure passed with overwhelming support on November 8.

Protect the Harvest’s zeal to fight regulation of animal farming extends even to “puppy mills“—large facilities that churn out dogs like factory farms churn out pigs. Back in 2010, the year before Protect the Harvest was founded, Lucas vigorously opposed a Missouri ballot measure to “require large-scale dog breeding operations to provide each dog under their care with sufficient food, clean water, housing and space; necessary veterinary care; regular exercise and adequate rest between breeding cycles,” and to “prohibit any breeder from having more than 50 breeding dogs for the purpose of selling their puppies as pets.” In 2014, Protect the Harvest opposed an Illinois bill banning the retail sale of puppy-mill dogs.

Klippenstein isn’t the only member of Trump’s USDA transition team. Recall that back in November, Trump picked a lobbyist whose clients include Little Ceasar’s Pizza, the soda and snack industries, and the Illinois Soybean Association to lead the agency’s transition. He soon abruptly quit after Trump announced a ban on registered lobbyists serving in the transition.

But then, a few days later, Trump tapped Joel Leftwich, Republican staff director for the Senate Agriculture Committee, to help lead the USDA transition. Leftwich took the Senate job in 2015—after having spent the previous three years as the director of government affairs for Pepsi. In 2010—just before another stint on the Senate ag committee staff—Leftwich had worked as a lobbyist for seed and chemical giant DuPont. In other words, Team Trump pushed out a current lobbyist for Big Soda and Big Ag—only to replace him with a guy who basically lives in the revolving door between government and agribusiness, and whose latest turn as a lobbyist ended way back in 2015.

So basically, we’ve got a two-time industry lobbyist and an anti-animal-welfare zealot teaming up to choose the next USDA chief.

What that means for the prospect of Heitkamp taking the USDA reins is unclear. She narrowly won her North Dakota Senate seat in 2012, and Trump won the state in 2016 with 63 percent of the vote. As a Democrat, she faces a hard fight for reelection in 2018, which may be why she agreed to meet with Trump on December 2, in what was widely read as a job interview. If she exits the Senate now, North Dakota would have to hold a special election to replace her, and the winner would almost certainly be a Republican. On Monday, Sen. Harry Reid (D-Nev,), the soon-to-retire former Democratic leader of the Senate, sought to throw water on the Heitkamp-to-USDA rumor, telling CNN that “I would doubt very seriously” that she’d agree to join the Trump administration. Whether he has knowledge of Heitkamp’s intentions, or is just hoping to keep a Senate seat in the party fold, is unclear.

But as a centrist Dem, she seems like a bit of a vanilla pick, given the characters who are running Trump’s USDA transition.