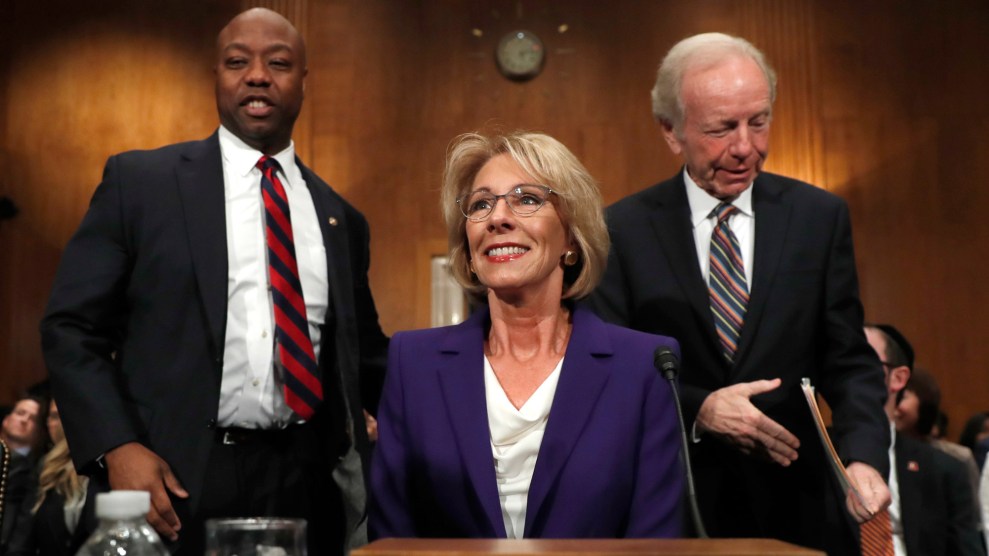 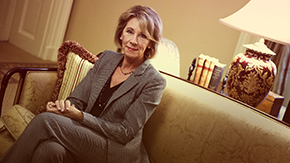 While Republicans on the Committee on Health, Education, Labor, and Pensions lauded the billionaire philanthropist—and prominent GOP donor—for her commitment to expanding charter schools and voucher programs, committee Democrats barraged DeVos with specific, pointed questions about her attempts to privatize public education, even pleading with Sen. Lamar Alexander (R-Tenn.), the HELP chairman, for the opportunity to ask more questions as the three-and-a-half-hour hearing boiled over.

DeVos reaffirmed her support for an education system beyond a “one size fits all” approach that opened up choices—”whether magnet, virtual, charter, home, religious, or any combination thereof.” But when pushed beyond her talking points, she was stiff and often thrown off her game:

“If you were not a multibillionaire…”

Sen. Bernie Sanders (I-Vt.) didn’t shy away from challenging DeVos on her family’s large contributions to the Republican Party. “Do you think that if you were not a multibillionaire, if your family had not made hundreds of millions of dollars in contributions, that you would be sitting here today?” Sanders followed up by grilling DeVos on free college education and tax cuts on the richest Americans.

“Do you not want to answer my question?”

During a tense exchange, Sen. Tim Kaine (D-Va.) challenged DeVos on whether schools that receive federal funding should meet the same accountability standards, the Individuals With Disabilities Education Act, and report the same information on instances of bullying, discipline, and harassment. DeVos was…less than forthcoming.

Sen. Al Franken (D-Minn.) wanted to know if DeVos thought test scores should measure a student’s proficiency (i.e., did she reach a specific standard?) or a student’s growth (i.e., did she improve over time?). After DeVos struggled to clarify the distinction, Franken responded, “This is a subject that has been debated in the education community for years…But it surprises me that you don’t know this issue.” He also pushed DeVos on her family’s past donations to groups that support anti-LGBT causes—including Focus on the Family, a nonprofit founded by evangelical leader James Dobson—and even asked whether DeVos supported conversion therapy.

Sen. Bob Casey (D-Pa.) asked whether DeVos would uphold a 2011 Department of Education letter establishing that sexual assault on college campuses was covered by Title IX and school reporting standards. DeVos would not commit to an answer, noting it would be “premature” to do so and that she would work with lawmakers to find a resolution.

Longtime gun control proponent Sen. Chris Murphy (D-Conn.) asked DeVos directly whether guns had any place in schools. “That’s best left to locales and states to decide,” she responded. When Murphy followed up, DeVos referred back to an earlier question about an elementary school from Sen. Mike Enzi (R-Wyo.). “I would imagine that there’s probably a gun at the school to protect from potential grizzlies,” DeVos said.

Sen. Maggie Hassan (D-N.H.), whose son has cerebral palsy, questioned DeVos on her knowledge of the Individuals With Disabilities Education Act—particularly whether DeVos knew that it was a federal law. DeVos eventually said she “may have confused it” with something else.

On the Prince Foundation board or not?

Hassan also asked DeVos about a $5.2 million donation that the Edger and Elsa Prince Foundation made to Focus on the Family. As my colleague Kristina Rizga noted in her new, in-depth investigation, DeVos was listed as a vice president of the Prince Foundation in tax documents through at least 2014. But DeVos denied having any real involvement in her parents’ foundation: “That was a clerical error. I can assure you I have never made decisions on my mother’s behalf on her foundation’s board.”