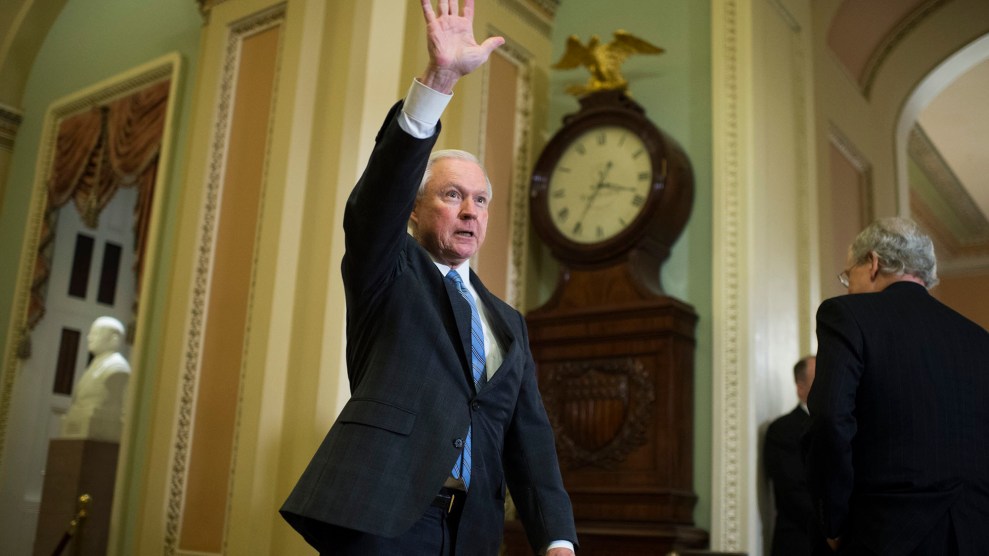 When Donald Trump’s victory on election night became clear, the shares of the largest private prison corporations shot up. If the Senate confirms Sen. Jeff Sessions (R-Ala.) as the next attorney general in the coming weeks, the companies and their shareholders will have even more to celebrate.

Last summer, the Justice Department announced it would stop contracting with the for-profit prison industry, whose facilities are more violent and less humane than government-run prisons. But Trump has spoken favorably of private prisons, and Sessions, who at the helm of the Justice Department would have the power to reverse its decision, has close ties to the industry and a history of supporting private prisons.

The horrors of private prisons are well documented. In August, a report from the Justice Department inspector general found dramatically higher levels of violence between inmates and between inmates and staff at private prisons that contracted with the Bureau of Prisons than at comparable public facilities. The inspector general also found more instances of lockdowns and unjustified use of isolation units and solitary confinement. The report, which corroborated years of evidence of mismanagement at private prisons—including a Mother Jones investigation of a Corrections Corporation of America (CCA) prison in Louisiana—prompted the Obama administration’s decision to phase out its contracts with private prisons.

The incoming Trump administration will likely be a boon to the flailing for-profit prison industry. “I do think we can do a lot of privatizations and private prisons,” Trump said last spring. “It seems to work a lot better.” Trump campaigned on a promise to deport undocumented immigrants, a policy also championed by Sessions that will require more detention facilities for people facing deportation proceedings. “I think we’re looking ahead at massive expansion of our detention system,” Mary Small of the Detention Watch Network, which opposes private prisons, told NPR this week. “And what we’ve seen over the last decade is that when the detention system grows, that’s mainly through the use of private prison companies.”

The GEO Group, one of the largest private prison companies, came under fire this fall after one of its subsidiaries donated $125,000 to a pro-Trump super-PAC. A watchdog group argued the donation was illegal because government contractors are barred from making political contributions and the subsidiary is indistinguishable from GEO Group.

Sessions has repeatedly expressed support for private prisons over the past 20 years. As attorney general of Alabama, Sessions greenlighted the use of private prisons in his own state. In early 1996, Sessions wrote an advisory opinion stating that state law allowed Alabama to contract with private companies to manage state prisons, according to the Birmingham News. (The privatization push was led by State Prison Commissioner Ron Jones, who was forced to resign a few months later for trying to turn the female prison population into a shackled chain gang.)

In 2006, Sessions helped a private prison in Perry County, Alabama, secure a lucrative federal contract to house undocumented immigrants awaiting court proceedings or deportation, according to the Birmingham News. The prison had been empty because state lawmakers had balked at the cost of housing inmates at the private facility.

In the US Senate, Sessions has expressed support for private prisons. At a Senate Judiciary Hearing in 2010, Sessions expressed his backing of the for-profit prison industry during a confirmation hearing for a nominee to lead the US Marshals Service. “I did want to say that I do think there is a role for private prisons in the American system,” Sessions told the nominee, Stacia Hylton, whose ties to the private prison industry had received scrutiny from Democrats. “I do not think you would have a blanket refusal to consider that and if anybody is critical of you for that, I do not think that would be justified.”

This fall, in the wake of the Justice Department’s decision to move away from private prison contracting, the GEO Group hired several lobbyists, including two former aides to Sessions. Alabama attorneys David Stewart and Ryan Robichaux were hired to lobby on “federal government use of contract correctional facilities,” according to Politico. They’ll know exactly who to turn to if their former boss becomes attorney general.