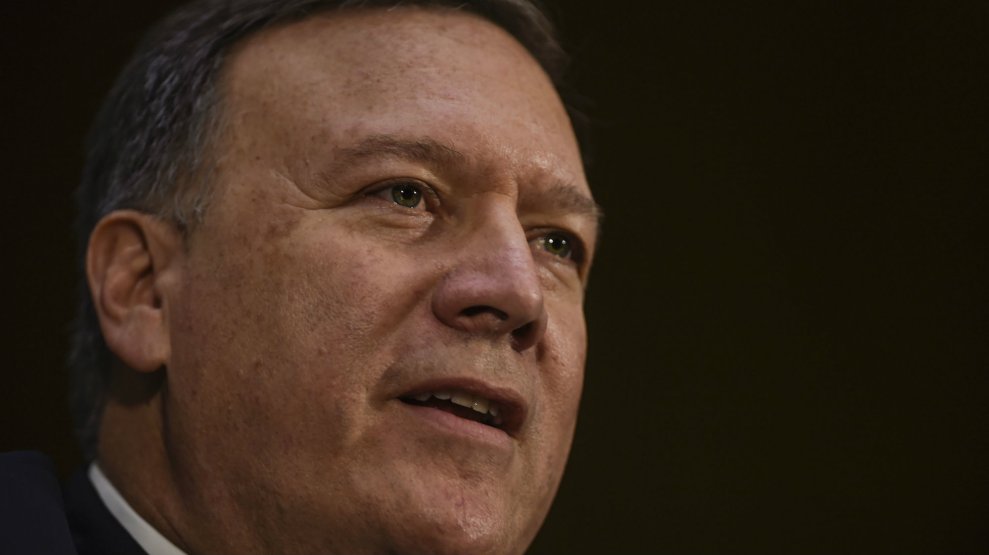 The man picked by Donald Trump to be director of the Central Intelligence Agency apparently is in the dark on an important intelligence matter: Trump’s view on torture.

Rep. Mike Pompeo (R-Kan.) has been tapped by Trump to lead the spy service, and on Thursday morning he came before the Senate Intelligence Committee for his confirmation hearing. He addressed the matters in the headlines. He said he accepted the intelligence community’s assessment that Russian intelligence hacked Democratic targets during the 2016 campaign and then leaked material to benefit Trump. “It is pretty clear,” Pompeo said, noting the Russian motive was “to have an impact on American democracy.” Unlike Trump, Pompeo was fully embracing the intelligence community’s findings.

But Pompeo was also caught in a hack-related contradiction. Sen. Angus King (I-Maine), a member of the committee, pointed to a tweet Pompeo sent out in July declaring, “Need further proof that the fix was in from Pres. Obama on down? BUSTED: 19,252 Emails from DNC Leaked by Wikileaks.” King didn’t say this, but his point was obvious: With this tweet, the incoming CIA chief had helped a secret Russian intelligence operation to change the outcome of the presidential election. King did ask Pompeo, “Do you think WikiLeaks is a reliable source of information?” Pompeo replied, “I do not.” So, King inquired, why did he post this tweet and cite WikiLeaks as “proof”? Pompeo was busted. Pompeo repeated that he had never considered WikiLeaks a “credible source.” King pushed on and asked Pompeo how he could explain his tweet. Pompeo stammered and remarked, “I’d have to go back and take a look at that.” Uh, right.

Another awkward moment came when Sen. Dianne Feinstein (D-Calif.) questioned Pompeo about the use of torture. “If you were ordered by the president,” she asked, “to restart the CIA’s use of enhanced interrogation techniques that fall outside the Army field manual”—meaning waterboarding and other methods now banned by law—”would you comply?”

“Absolutely not,” Pompeo said. He pointed out that he had voted for the law that banned waterboarding and other acts of torture that the CIA had used during the Bush-Cheney years. “I will always comply with the law,” Pompeo declared. (In 2014, however, he claimed that the interrogation techniques in use during the Bush administration were not torture.)

But Pompeo also said this: “I can’t imagine I would be asked by the president-elect or then president” to have the CIA engage in torture.

His imagination, then, is rather limited. During the presidential contest, Trump made headlines with his promise to revive waterboarding and to use other means of torture. During one of the Republican primary debates, Trump was quite firm on this point. He was asked about former CIA Director Michael Hayden’s remark that the military could defy orders from the president to torture or kill civilians, and Trump went on a roll:

They won’t refuse. They’re not going to refuse, believe me. You look at the Middle East, they’re chopping off heads, they’re chopping off the heads of Christians and anybody else that happens to be in the way, they’re drowning people in steel cages, and now we’re talking about waterboarding…It’s fine, and if we want to go stronger, I’d go stronger too. Because frankly, that’s the way I feel. Can you imagine these people, these animals, over in the Middle East that chop off heads, sitting around talking and seeing that we’re having a hard problem with waterboarding? We should go for waterboarding and we should go tougher than waterboarding.

Trump was indicating that he didn’t give a damn about laws restricting the use of torture and that he would expect officials to follow any presidential orders to engage in such conduct. So how hard is it to envision that Trump, once in office, might order intelligence services and the military to use waterboarding and acts of torture that are “tougher than waterboarding”?

Pompeo was clear that his view on the use of torture is not in sync with Trump’s. He was clear that he would not follow an order to employ such methods. But he indicated that he didn’t understand his soon-to-be boss’ attitude toward torture. After all, it doesn’t take that much creativity to imagine Trump trying to follow through on his vow to bring back waterboading and much worse.