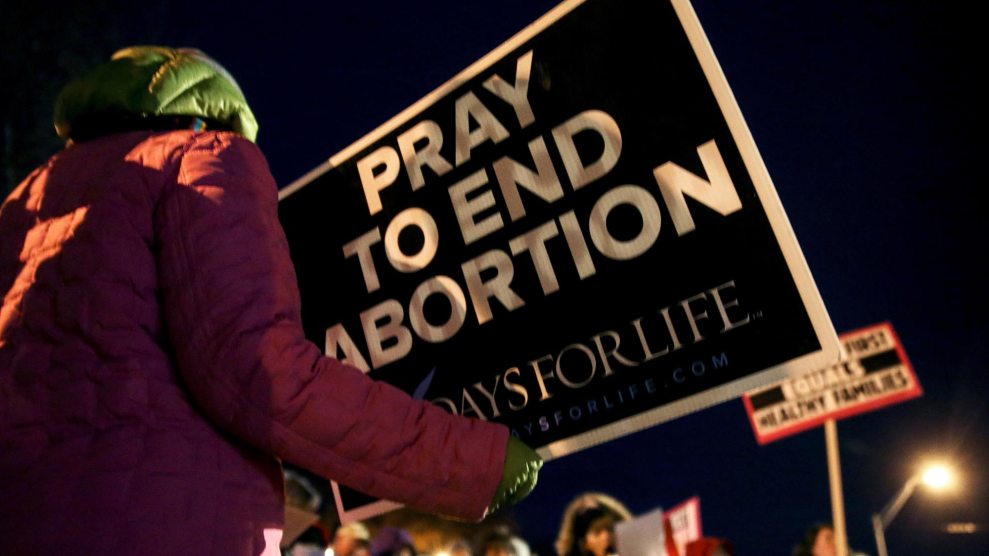 In November’s election, Republican Eric Greitens was elected to replace Democrat Jay Nixon as governor, making Missouri one of four states with a new trifecta in which the GOP controls all branches of government. Wasting no time, Missouri lawmakers prefiled 14 anti-abortion bills for the legislative session that started Wednesday.

The proposals include a personhood bill, religious liberty protections for crisis pregnancy centers, several measures blocking fetal tissue research, a chemical endangerment bill, and a bill regarding fetal burial similar to those passed this year in Indiana and Texas.

In Missouri, it is not unusual for lawmakers to prepare many abortion bills before the legislative session begins, but since 2014 lawmakers have never prefiled more than 10 bills. “This legislative session is going to be the fight of our lives,” said Elise Higgins, interim director of public policy and organizing at Planned Parenthood Great Plains, the regional affiliate that provides care in Missouri, Kansas, Oklahoma, and Arkansas.

The state has a long history of curbing access to abortion. Between 2011 and 2015, political pressure and abortion restrictions shut down four providers, and now only one abortion clinic remains to serve Missouri’s more than 2 million women. Year after year, legislators have filed dozens of anti-abortion proposals—31 in 2014, 27 in 2015, and 28 last year—with mixed success. The Show-Me State has also been a testing ground for new approaches to restricting abortion—a legacy that dates back to the 1989 Webster case decided by the Supreme Court. That ruling, which upheld a Missouri abortion law, allowed states to impose far more restrictions on abortion care than had previously been permitted under Roe v. Wade. This is what gives the current list of measures potential for national consequences.

Here are the bills that have been proposed so far:

In the past, most of the anti-abortion bills proposed have not become law, blocked at times by Missouri’s Democratic governor. Missouri’s new governor, Greitens, has not been vocal about his views on abortion, beyond noting that he is pro-life on his campaign website. But should bills cross his desk, advocates like Dreith believe he is likely to sign them. “I don’t think abortion is a major priority for him,” Dreith said. “But the anti-choice Republicans we have in our Legislature will be emboldened by Trump and by knowing that they have a governor that is probably going to support them in their efforts should something pass.”