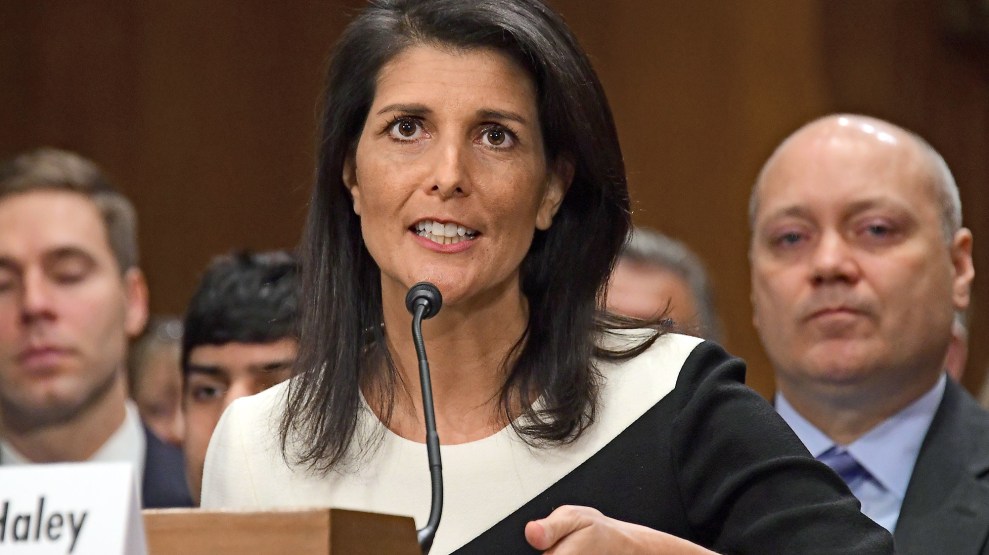 South Carolina Gov. Nikki Haley came out hard against Donald Trump during the 2016 presidential campaign. She used her platform during the GOP’s response to President Barack Obama’s 2016 State of the Union speech to urge fellow Republicans to resist the urge “to follow the siren call of the angriest voices” in her party’s primary. She said in February 2016 that Trump was “everything a governor doesn’t want in a president,” and only tepidly supported him after first backing Florida Sen. Marco Rubio and then Sen. Ted Cruz during the primary.

The notoriously thin-skinned Trump responded by calling the Indian American governor “very weak on illegal immigration,” and by tweeting, “The people of South Carolina are embarrassed by Nikki Haley!” Nonetheless, as president-elect, Trump picked Haley to be his ambassador to the United Nations, calling her a “proven deal-maker” with “a track record of bringing people together regardless of background or party affiliation.” Haley accepted his nomination: “Our country faces enormous challenges here at home and internationally,” she said, adding that she was “honored that the president-elect has asked me to join his team.”

But during her Senate Foreign Relations committee confirmation hearings Wednesday, flanked by her husband, son, parents, and two brothers, Haley joined other Cabinet nominees in expressing differences with Trump on foreign policy issues, starting with Russia.

“Do you agree, that both at the UN in New York and on the streets of Aleppo, Moscow has acted as an active accomplice in Assad’s murder of his own people?” Sen. Todd Young (R-Ind.), asked.

A few minutes later, Sen. Tom Udall (D-N.M.), said it was very clear that Russia had interfered in the US presidential election and asked Haley whether she would “stand up to Vladimir Putin and against Russia’s attempt to interfere with our electoral system?”

“We should stand up to any country that attempts to interfere with our [election] system,” Haley said. Udall then asked her what her message to her Russian counterpart at the UN would be regarding election meddling.

“That we are aware that it has happened, we don’t find it acceptable, and that we are going to fight back every time we see something like that happening,” Haley replied. “I don’t think Russia’s going to be the only one—I think we’re going to start to see this around the world with other countries. And I think that we need to take a firm stand that when we see that happen, we are not going to take that softly, we are going to be very hard on that.”

Trump has continually downplayed and cast doubt on the findings of the CIA, the National Security Agency, and the FBI that Russia’s government attempted to influence the 2016 US presidential election in order to hurt Hillary Clinton and boost Trump’s chances of winning. Haley was just the latest of his nominees to publicly break from the president-elect on Russia: Secretary of State nominee Rex Tillerson did, and so did Defense Secretary nominee General James Mattis and the nominee for CIA director, Rep. Mike Pompeo.

Haley also came out in support of NATO, calling it “an important alliance for us to have…and I think it’s [an alliance] we need to strengthen.” Trump has called NATO “obsolete.”

Unlike the confirmation hearings for some of Trump’s other Cabinet picks, there were no contentious exchanges with even the Democratic senators during her three-and-a-half-hour hearing. Haley was long considered to be one of Trump’s least controversial appointees.