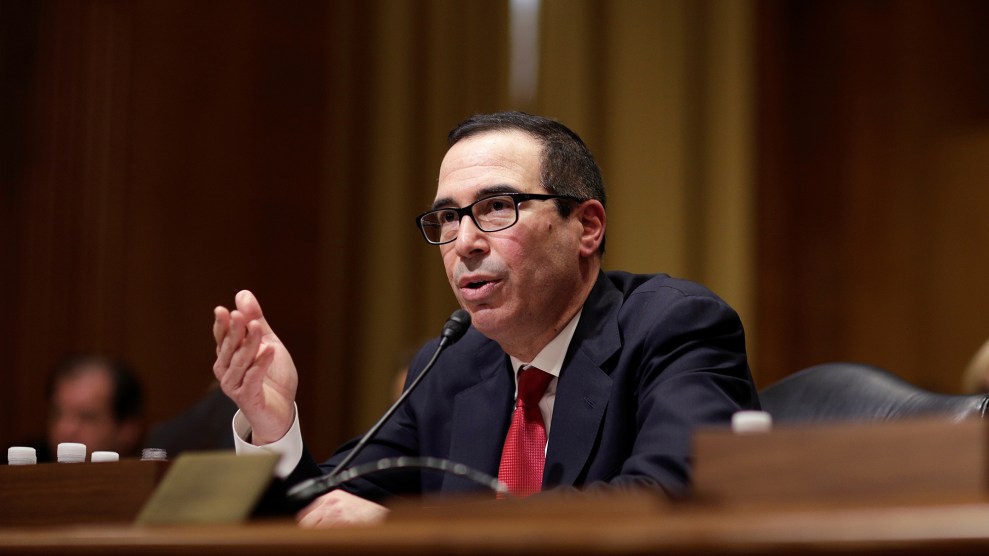 Update 2/1/16: Early Wednesday morning, the Republicans on the Finance Committee reconvened to approve Mnuchin and Price. The Democrats were still boycotting, but Republicans rewrote the committee’s rules to proceed on the confirmation votes without needing any minority members present. “We took some unprecedented actions today due to the unprecedented action on the part of our colleagues,” Hatch said. “As I noted earlier, the Senate Finance Committee has been able to function even in the most divisive political environments. That all changed yesterday.”

After years of obstruction from Republicans in Congress, Senate Democrats have decided to play the same game. A panel of Senate Democrats unexpectedly boycotted a committee hearing Tuesday morning in an attempt to derail two of President Donald Trump’s most prominent Cabinet nominations.

The Senate Finance Committee was scheduled to vote on two of Trump’s Cabinet nominees Tuesday morning: Steven Mnuchin for treasury secretary and Rep. Tom Price (R-Ga.) for health and human services secretary. But the Democrats on the committee banded together in a boycott, and not a single one of them showed up. According to committee rules, at least one member of the minority party needs to be present in order to form a quorum to record a vote.

The committee’s Republican chairman, Sen. Orrin Hatch of Utah, was incensed. “This is the most pathetic thing I’ve seen in my time,” he said. That sentiment represents a reversal from Hatch on whether presidential nominees deserve a committee vote. When a seat on the Supreme Court opened last year following Antonin Scalia’s death, Hatch cited Merrick Garland as the sort of judge he could see the Senate confirming. When President Barack Obama in fact nominated Garland, less than a week after Hatch’s comment, the senator changed his tune and joined the rest of the GOP caucus in refusing even to consider Garland’s nomination.

Democrats have vehemently objected to both Price and Mnuchin. Trump’s health pick has been plagued by ethics allegations that he used his office to pen legislation that benefited his personal stock investments. And Mnuchin lied during his confirmation about his bank using robo-signing for foreclosures. Sen. Ron Wyden of Oregon, the ranking Democrat on the committee, took to Twitter to explain the boycott of both nominees:

The litany of ethics revelations regarding @RepTomPrice are strong evidence that he cannot be allowed to have control of #Medicare.

Hatch closed Tuesday’s hearing by saying he hoped Democrats would return and sit down to take a vote, but he didn’t offer a timeline for when this stalemate might end.