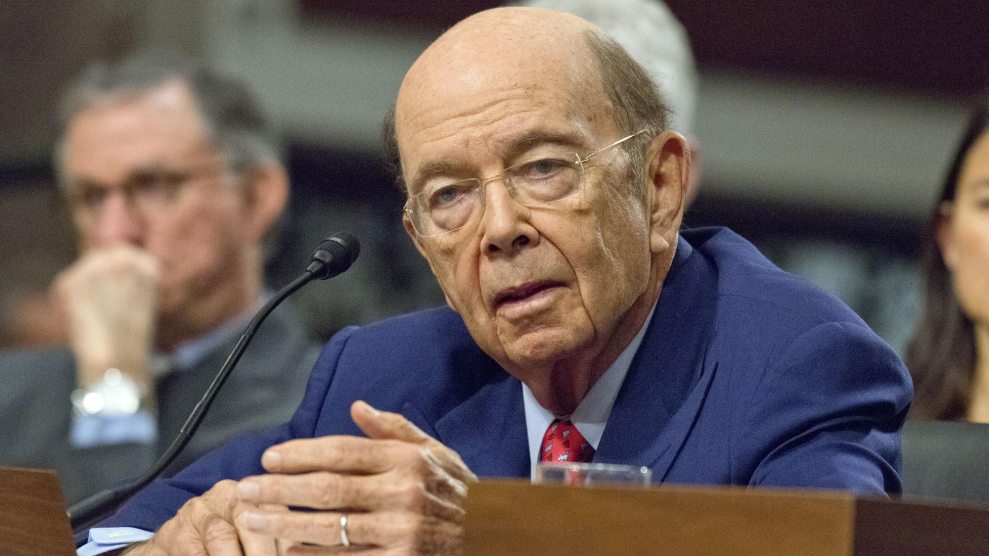 Wilbur Ross, Donald Trump’s pick for commerce secretary, is a legendary corporate raider who made billions of dollars buying failing companies and flipping them for a profit. But as he built his $2.5 billion fortune, Ross and his private equity firm, WL Ross & Co., have faced several lawsuits and regulatory actions accusing them of financial misconduct, including breach of fiduciary duty and fraud. His controversial business record received some scrutiny during his confirmation process. But one recent lawsuit involving Ross has garnered little attention. And it raises serious ethical questions about the business dealings of the billionaire who, if confirmed by the Senate, will be in charge of promoting job creation and economic growth.

The case, filed in a Florida federal court, involved a publicly traded mortgage company called Ocwen Financial. Ross served as a board member for the firm. In 2013 and 2014, state and federal regulators targeted the company over allegations that it engaged in a variety of improper practices. Ocwen’s stock plummeted, and shareholders suffered major losses. Its stock peaked in 2013 at about $56 per share, and the company is currently trading at about $5. But Ross managed to avoid millions in losses by off-loading his holdings in the company in two curiously timed trades that came shortly before damaging news was revealed that sent Ocwen shares into a tailspin. In the suit, shareholders accused Ross and other company directors of using inside information to enrich themselves and of leaving “ethics, integrity, and fair dealing by the wayside in their quest for ever higher revenues and thus, higher compensation and ever more lucrative incentives for themselves.”

The White House press office and Invesco (which is a corporate parent of WL Ross) did not respond to multiple requests for comment. Ocwen spokesman John Lovallo declined to respond to questions from Mother Jones, but he provided a statement about the company’s corporate governance practices. “Today, the composition, structure, experience and diversity of Ocwen’s Board, which consists of eight members, seven of whom are independent directors, is as strong as any comparable financial services company,” Lovallo wrote. “Ocwen is recognized as the industry leader in responsible home retention through foreclosure prevention.”

The suit charged that Ross, his firm, and its related funds “profited handsomely at the Company’s expense and thereby unjustly enriched themselves.”

The Homeward deal came during an Ocwen buying spree, as the company rapidly scooped up the mortgage-servicing units of big banks and other financial firms following the housing crisis. (Mortgage services are not lenders, but they collect loan payments and initiate foreclosure proceedings if homeowners default.) Ocwen’s business practices—including allegations that it had prematurely foreclosed on homeowners and mishandled loan modifications—placed the company on the radar of regulators, including the New York Department of Financial Services (NYDFS). The agency held up the Homeward sale until December 2012, when Ocwen agreed to two years of independent monitoring to ensure that “reforms are implemented and homeowners have a real chance to avoid foreclosure,” according to the agency’s head, Benjamin Lawsky.

In their lawsuit—a consolidated version of several previously initiated lawsuits was filed in federal court in March 2016—the Ocwen shareholders presented a timeline that they claimed supported their allegations. Through the sale of Homeward, Ross and his firm had received $162 million in Ocwen shares. In September 2013, Ross, on behalf of his private equity firm, sold more than 3.1 million Ocwen shares, at $50.19 a share, netting almost $158 million. Three months later, in December, the Consumer Financial Protection Bureau announced that Ocwen had agreed to pay $2.1 billion to settle charges of mortgage-servicing misconduct dating back to 2009, including hitting homeowners with unauthorized fees and deceiving consumers about foreclosure alternatives and loan modifications. As part of the settlement, Ocwen did not admit to or deny the CFPB’s allegations. Soon afterward, Ocwen’s stock had dropped to $44.14 per share, and it continued its downward slide from there.

The following year, WL Ross sold another large block of Ocwen stock. Once again, the sale came shortly before negative news was announced that sharply affected Ocwen’s stock. On July 14, 2014, WL Ross sold nearly 2 million Ocwen shares back to the company at about $37 a share, netting $72.1 million. On July 31, the company reported poor quarterly returns and within days its shares fell in value by more than 20 percent. Ocwen blamed its subpar earnings on the rising costs of complying with NYDFS’ required monitoring. On August 4, the NYDFS announced it was probing Ocwen for requiring homeowners to pay for “forced-placed insurance”—insurance that is taken out by the lender. By the end of December, Ocwen stock had sunk to about $15 per share. Due to the timing of his trade, Ross and his company avoided $18 million in losses. (The NYDFS investigation led to a broader December 2014 settlement, in which Ocwen agreed to pay a $150 million fine.)

Ross, the suit maintained, was in a particular position to know about Ocwen’s mounting regulatory issues because he was a member of the board’s compliance committee.

Other Ocwen shareholders were not as lucky as Ross and his firm. Three Ocwen shareholders subsequently filed lawsuits against Ross and other company directors. The subsequently consolidated lawsuit alleged that Ross and two other members of the board of directors ignored “systemic and ongoing” wrongdoing by Ocwen. It claimed that the misconduct had ultimately cost the company more than $2 billion, and that Ross and his co-defendants “sold their personal holdings of Ocwen stock…while having knowledge of material, adverse inside information, in violation of state and federal law and in breach of their fiduciary duties to the Company.” And the suit charged that Ross, his firm, and its related funds “profited handsomely at the Company’s expense and thereby unjustly enriched themselves.” Ross, the suit maintained, was in a particular position to know about Ocwen’s mounting regulatory issues because he was not just a company director but a member of the board’s compliance committee.

Ross and fellow members of this committee had “total access to all documents and information bearing upon the Company’s operations,” the complaint alleged. And they were “personally aware or should have been aware that the Company was not in compliance with legal and regulatory requirements, including…applicable state and federal consumer protection laws and regulations and the multiple agreements and consent decrees made with Ocwen’s regulators, which were regularly breached by the company.”

Despite their knowledge of the company’s financial condition, mortgage-servicing misconduct, and ongoing regulatory actions, Ross and other company directors signed their names to a Securities and Exchange Commission filing in March 2014 affirming that Ocwen was successfully managing its regulatory obligations and reiterating the company’s “previously-announced financial results and financial positions,” according to the complaint.

Ocwen settled the suit in December on behalf of Ross and the other directors, agreeing to pay up to $2.2 million in attorney’s fees and other expenses and to institute a range of corporate governance reforms. As part of the settlement, Ross and the other defendants did not deny or acknowledge wrongdoing.

Lawrence Harris, one of the Securities and Exchange Commission’s chief economists during the George W. Bush administration and now a finance professor at the University of Southern California’s Marshall business school, said that because the Ocwen case was settled instead of going to trial, it is unclear what Ross knew at the time that he made his trades. “When confronted with the fortuitous timing of his sale, careful observers will certainly ask themselves whether Ross had knowledge as to what was going to happen,” Harris says. “If his knowledge was obtained through his insight, then he’s simply a disciplined investor. But if his knowledge was obtained through his position as director of the firm, of course there would be substantial concerns of the ethics of his subsequent sale.”

“If you had two otherwise identical candidates [for commerce secretary], one has this record, the other one doesn’t, there’s no question that you would prefer the candidate who doesn’t have the record,” he says. “At some point you have to ask yourself, if you have a candidate with this type of record, who exactly are we dealing with?”