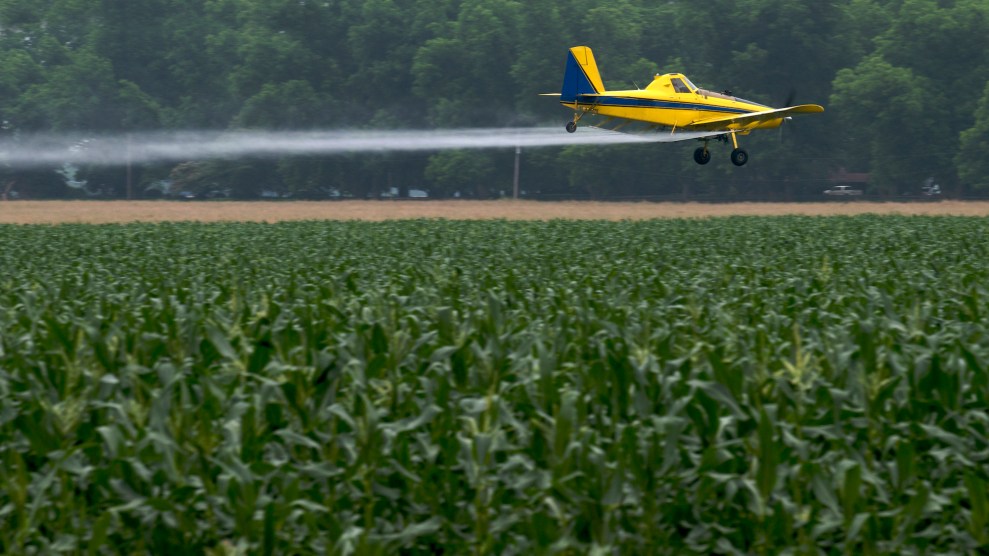 When Indiana’s then-Gov. Mike Pence needed to appoint a new director of his state’s agriculture department back in 2013, he dipped right into the corner offices of the global agrichemical industry. His pick, Ted McKinney, then the director of global corporate affairs for Elanco Animal Health, a division of pharma giant Eli Lilly, had previously been an executive on the government affairs team for seed/pesticide giant Dow AgroSciences.

Now Pence is the vice president-elect for the incoming Trump administration, which sorely needs to appoint a secretary of the US Department of Agriculture, the only open Cabinet slot. And McKinney, recently reappointed as director of Indiana’s agriculture department, has emerged as the latest in a long line of contenders du jour for the job, Politico reports.

The seed and pesticide industries would certainly have a major ally at the helm of the USDA if McKinney gets the nod.

And now the USDA post is really open: Tom Vilsack, the outgoing USDA chief, abruptly quit Friday, informing employees in an email he had served his final day, Associated Press reports. Vilsack added some damning commentary on Trump’s delay in choosing his successor: “When that individual is named, he or she will be at a tremendous disadvantage, in terms of getting up to speed on all this department does,” Vilsack said in a statement, according to AP.

Will McKinney be the one Trump chooses for the burden? In his capacity as an Indiana government official, McKinney—who also serves as director of agribusiness development at the Indiana Economic Development Corporation—is perhaps best known for helping lead an ultimately unsuccessful but “very aggressive” effort to entice DowDuPont to choose Indianapolis as the corporate HQ of its agrichemical arm. McKinney has a well-earned perspective on the advantages of doing agribusiness in Indiana, which sits in the heart of the US corn belt. His most recent private-sector employer, Elanco, is headquartered in the state, as was Dow AgroSciences, until its parent company merged with DuPont last year.

The seed and pesticide industries would certainly have a major ally at the helm of the USDA if McKinney gets the nod. In addition to having worked for Dow for nearly two decades, Mckinney was a co-founder and served as interim executive director for the Council for Biotechnology Information, a group funded by BASF, Bayer, Dow AgroSciences, DuPont, Monsanto, and Syngenta to promote agriculture biotech. These companies need USDA approval to move novel genetically modified seeds from lab to market. And apparently they have Trump’s ear—on Wednesday, Bayer CEO Werner Baumann and his Monsanto counterpart Hugh Grant scored an audience with the incoming president to promote their pending merger, which will need to pass antitrust vetting from Trump’s justice department.

But McKinney isn’t purely an agri-tech nerd. In an address before an annual meeting of an Indiana pork industry group soon after taking the Indiana Department of Agriculture job, McKinney cited “divine intervention” as one of the main reasons for his move from the corner office to the state bureaucracy. After getting the call from Pence, he explained, “my wife and I prayed about it, it just seemed right. I took the plunge, and here we are…and I’m having a ball!”

Like former Georgia Gov. Sonny Perdue, McKinney appeared on early versions of Trump’s USDA short list, disappeared from discussion for weeks, only to reemerge with a headline-grabbing visit to Trump Tower, Politico reports.