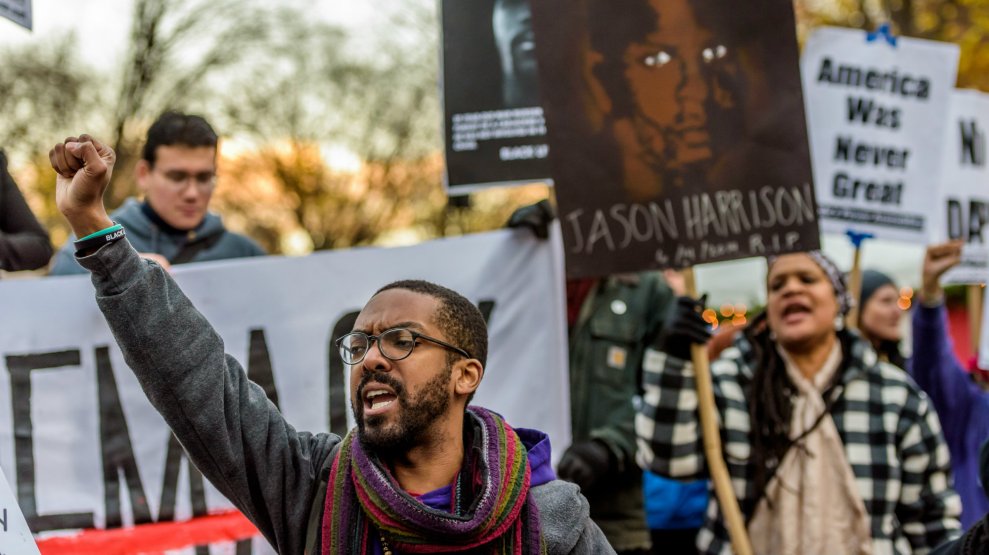 Donald Trump repeatedly expressed hostility towards Black Lives Matter activists during his presidential campaign, particularly for their efforts to confront police brutality. Now, faced with a Trump agenda whose repercussions for African Americans could reach far beyond policing, BLM organizers say they are broadly expanding their mission.

Ever since a police officer killed teenager Michael Brown in Ferguson, Missouri, the Black Lives Matter movement has grown into a loose-knit web of like-minded groups nationwide that focus primarily on ending police brutality and the disproportionate incarceration of African Americans. Last August, a coalition of nearly 30 BLM groups, known as the United Front, released a policy platform calling for comprehensive police and criminal justice reforms, economic investments in black communities, and the mobilization of black voters. The shock of Trump’s election has turbocharged their sense of urgency.

Trump’s election, says a BLM leader, represents “an escalation of the war on black bodies and lives.”

Trump’s immigration order barring refugees and immigrants in particular “changed the rules of engagement,” says Malkia Cyril, executive director of the Oakland-based Center for Media Justice, part of the United Front. The new president’s agenda, she says, represents “an escalation of the war on black bodies and lives.” Approximately a quarter of Muslims in America are black, she notes; Trump’s order blocked immigrants from the African countries of Sudan, Libya, and Somalia, among others. “The issue is the culture that gets created that is anti-Muslim, anti-black, anti-brown, anti-woman,” she says.

Following Trump’s election, I interviewed leaders and local organizers with seven groups participating in the United Front about their plans for confronting the Trump era. I also talked to an organizer with an eighth group, Campaign Zero, whose cofounders include Deray McKesson, perhaps the movement’s most visible organizer. All of these activists reiterated that police and criminal justice reform will remain a priority, but that other issues have become equally urgent.

In the wake of Trump’s immigration order, BLM organizers mobilized their networks to turn out at airports to protest. The groups also fired up their social media networks to amplify calls for the release of detained travelers. BLM leaders say their strategy will evolve as more details become known about what Trump plans to do on matters ranging from policing and reproductive rights to climate change and LGBT issues. They will focus on combating what they see as Trump’s hostile, retrograde agenda—and that of right-wing politicians emboldened by Trump—primarily at the state and local levels.

Immigration concerns are squarely on the radar for Million Hoodies, Barry says. The six current members of the group’s chapter in Greensboro, North Carolina—all college students—are drafting sanctuary campus policies that they plan to pitch to school administrations. The group is also in talks with at least one other local group about how Million Hoodies can bolster their efforts to protect undocumented residents throughout Greensboro. Last fall, Million Hoodies Greensboro also supported a local campaign to repeal North Carolina’s infamous anti-LGBT bathroom bill. “We just show up when folks need support,” member Delaney Vandergrift told me. “Showing up at protests and community meetings. Amplifying on social media. Making signs. Anything that local organizations already doing the work are asking for.”

“The crises are so large that we have to have the capacity to address more than one thing at a time.”

Patrisse Cullors, cofounder of the Black Lives Matter Global Network, said her organization of nearly 40 chapters plans to expand its work on reproductive rights from a handful of southern US cities to other parts of country. The network hopes to replicate work like that of its chapter in Louisville, Kentucky, which is part of a repro-rights coalition that meets monthly and includes Planned Parenthood and the ACLU of Kentucky. This week, following the opening of the Kentucky legislature’s next session, members from BLM Louisville and its partners plan to go to the statehouse in Frankfort to lobby against a bill that would require women to get an ultrasound before getting an abortion, according to Chanelle Helm, an organizer with the chapter. In the upcoming legislative session the group also plans to lobby against a Kentucky bill that would make assaulting a police officer a “hate crime.”

Shortly before Trump’s inauguration, Campaign Zero rolled out a Trump Resistance Manual, broadening its focus on data gathering beyond police reform. The site includes descriptions of various Trump policy proposals and assessments of their potential impact; it encourages users to crowd-source information about ways people can get involved in local organizing around more than a dozen issues, including police reform, LGBT rights, education, and climate change.

“The crises are so large that we have to have the capacity to address more than one thing at a time,” said Sam Sinyangwe, a co-founder of the group. “In this moment when they’re trying to take away health care from 30 million people, we simply cannot ignore that in the interest of focusing on one issue.”

Still, police reform remains crucial, and efforts at the state and local levels will be key. The new political reality of a Republican-controlled White House and Congress narrows the prospects for federal criminal justice reform, and leadership from the Department of Justice on police reform, as was the case under President Obama. “We have a federal government—and when I say the federal government I mean [prospective] Attorney General Jeff Sessions—who doesn’t believe in consent decrees,” said Barry, referring to the DOJ interventions mandating reform for troubled local police departments. “So I think particularly the Trump administration is not going to be useful or helpful for our communities.”

Trump has praised stop-and-frisk and the broken-windows policing strategy, both widely considered racially discriminatory. A budget blueprint for the next fiscal year prepared by the conservative Heritage Foundation—a plan mirrored by budget proposals made by the Trump administration, the Hill reported—would also cut $58 million dollars in funding from the DOJ’s Civil Rights Division, which handles police investigations.

Barry said he expects DOJ work on civil rights investigations into police shooting cases that weren’t finished under the Obama administration—such as the Eric Garner and John Crawford investigations—to stall. And worrisome for Campaign Zero’s Sinyangwe is the prospect that, under Trump, the DOJ might be more inclined to intervene in cases of police violence in support of law enforcement. “That’s a different situation that we’re not accustomed to in terms of [the Civil Rights] division,” he said.

This year, Campaign Zero will begin pushing for laws that empower state attorneys general to open civil rights investigations into local police departments, as is already the case in California, Sinyangwe said. The group will also push for local laws that require a vote by a city council before a police department can accept military equipment from the federal government. Trump has suggested that he will expand the DOJ program that transfers such equipment to local law enforcement.

BLM leaders aim to capitalize on the energy of the nationwide protests that have unfolded since Trump’s election. The local Sacramento chapter of the Black Lives Matter Global Network has canvassed neighborhoods and college campuses five times since the election and has a fast-growing email list, Tanya Faison, the founder of the chapter, told me.

In mid-January, Black Lives Matter groups around the country led multiple protests against pieces of Trump’s agenda that target immigrants, Muslims, and other people of color; the effort began on MLK Day and culminated with the mass anti-Trump protests on inauguration day. April Goggans, who is with the Black Lives Matter Global Network chapter in Washington, D.C., said BLM organizers have been “in awe” of the throng of supporters for their recent events. “It’s really important to us that every time we have a mobilization, that we have an intentional thing to call people into next,” Goggans said. “The days of just rallying and going home are over because there’s a lot of work that needs to be done.”

During the week of the inauguration, BLM groups hosted “Know Your Rights” trainings and “teach-ins” on Trump’s agenda, among other efforts to educate and involve more supporters. In collaboration with the ACLU and the National Lawyers Guild, Goggans’ chapter held trainings that walked attendees through everything from protest permit laws in DC to what a person’s rights are when police give a dispersal order, and how to conduct yourself in jail if you do ultimately get arrested.

The Black Lives Matter Global Network has raised nearly $14,000 in support of the protest efforts at Standing Rock.

Goggans’ chapter plans to rally supporters this month to canvas in neighborhoods in southeast D.C.—an area shaken by increased gun violence in recent years, and where Goggans lives—to encourage people to oppose a push by the city’s mayor to hire more police as a key solution to violent crime. The plan is to talk to residents about initiatives like after school programs and donating books to schools, and “to listen to folks and ask, ‘What is your biggest concern about this? Or what things do you think will be helpful for the issue happening on your block or in your community?’ So that it’s not just giving information, it’s a sharing of information.”

Building that people power will benefit from more collaboration and resource sharing with non-BLM groups. Even before Trump’s election, some BLM groups had begun to build such coalitions. Last fall, some sent members to North Dakota to support Native American activists fighting against the construction of the Dakota Access pipeline, while others raised money and provided supplies for native activists on the front lines there. The Black Lives Matter Global Network has raised nearly $14,000 in support of the protest efforts at Standing Rock.

The potential for powerful grassroots alliances has only grown since Trump entered the Oval Office, BLM leaders say. “What we saw during the inauguration weekend is going to continue,” said Barry of the historic marches around the country involving myriad activist groups. “We’re all under attack. Each of us might be impacted very differently, but we now share a very similar political fate, and so it’s incumbent on all of us to really be in full coordination and solidarity with other movements.”