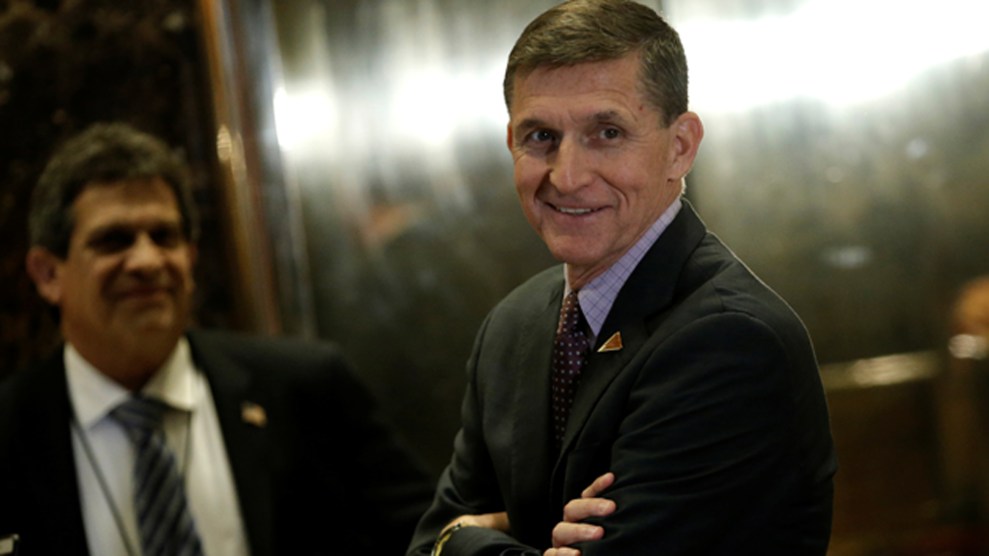 On Monday night, all 17 Democrats on the House Committee on Oversight and Government Reform sent a letter to Rep. Jason Chaffetz (R-Utah), the committee chairman, requesting that he either initiate a full investigation of Michael Flynn—President Donald Trump’s national security adviser who was caught misrepresenting conversations he had with the Russian ambassador—or “step aside and allow the Committee to vote on conducting basic oversight going forward.”

Flynn has been under fire since the Washington Post reported last week that he had discussed “US sanctions against Russia with that country’s ambassador to the United States during the month before President Trump took office,” despite claims to the contrary from Trump administration  officials, including White House press secretary Sean Spicer and Vice President Mike Pence. Flynn, too, had previously denied discussing with Russian Ambassador Sergey Kislya the sanctions levied by President Barack Obama in response to Moscow’s meddling in the 2016 election during a series of conversations in late December. But a spokesman for Flynn told the Post on Thursday that “he couldn’t be certain that [sanctions] never came up.”

On Monday, Kellyanne Conway, a senior White House adviser, said Flynn “does enjoy the full confidence of the president.” Less than an hour later, Spicer issued a statement saying that Trump was “evaluating the situation.” Monday night, the Post reported that then-Acting Attorney General Sally Yates told the White House in late January that she believed “Flynn had misled senior administration officials about the nature of his communications with the Russian ambassador.” The paper noted that she had “warned that [Flynn] was potentially vulnerable to Russian blackmail.”

The House Democrats’ letter to Chaffetz notes that Rep. Elijah Cummings (D-Md.), the ranking Democrat on the committee, has repeatedly asked Chaffetz to investigate Flynn’s contacts with the Russian government and put forward the case for an investigation:

Grave questions have been raised about the fitness of General Flynn to serve as National Security Adviser and to continue having access to classified information. It has now been reported that General Flynn took payments of an undisclosed amount to travel to Moscow to dine with Vladimir Putin and celebrate RT, which US intelligence officials warn is the “Kremlin’s principal international propaganda outlet”; that he potentially failed to obtain the consent of Congress to receive those funds in violation of the Constitution; that he communicated repeatedly with Russian officials while that nation was engaged in an attack on our democracy and our presidential election; that he secretly discussed with the Russian ambassador, in possible violation of the Logan Act, sanctions imposed by President Obama in response to these Russian attacks; and that he may have lied about these discussions not only to the American people, but to his own White House colleagues, including the Vice President.

If you are not willing to initiate this investigation…then we ask that you not prevent us from calling up this matter at the next business meeting so we may request a vote on this and other proposals going forward on this matter.

Chaffetz, who was eager to investigate Hillary Clinton’s email controversy, has come under pressure from Democrats on the committee and his own constituents for going soft on Trump and not launching inquiries regarding Trump’s financial conflicts of interest. Cummings and other Democrats have previously asked Chaffetz for a committee investigation of contacts between Trump associates and Russia—and he has ignored these requests.