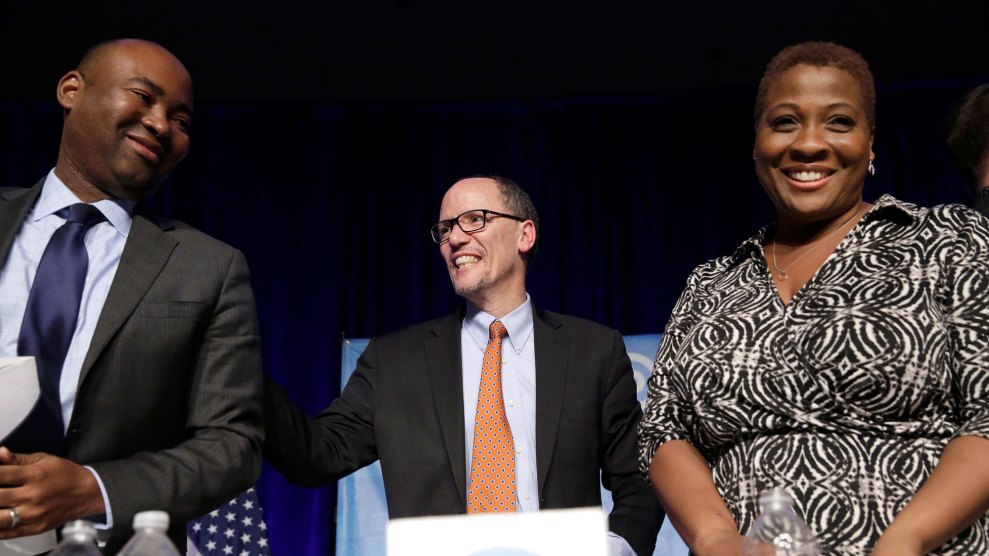 And to think, that was the easy part. Former Labor Secretary Tom Perez was elected as chair of the Democratic National Committee on Saturday, edging out Minnesota Rep. Keith Ellison in the first competitive election for the job in decades. The 55-year-old Perez, the first Latino chair of the party, will now inherit the most thankless job in politics—rebuilding a party that is at its lowest point since the 1920s.

The race was often miscast as a proxy fight between supporters of Bernie Sanders and supporters of Hillary Clinton, a framing that was unfair to both Ellison and Perez, dynamic and progressive political operatives running for a job often reserved for staid political figures. In the end, Perez’s win was not a rejection of Ellison’s vision of the party; in key ways, his campaign was an affirmation of it.

Party chair is a position typically of interest only to political junkies. But with organizers still amped up from the presidential election, the race had the feel and structure of a competitive primary, with a half-dozen candidate forums across the country and an intensive push from rank-and-file voters that recalled previous courting of superdelegates. “I’ve been lobbied consistently by phone, by email, by Facebook, by Twitter for the last month,” said Melvin Poindexter, a DNC member from Massachusetts who was supporting Ellison.

Ellison, for his part, tried to tamp down the barrage of phone calls on his behalf, which one state party chair unfavorably described as “anarchy.” But aggressive lobbying proved critical. Kerman Maddox, a DNC member from California, explained that he’d chosen Perez in part because “Tom called me more than any of the other Democratic candidates”—a sentiment echoed by other voting members.

After the results were announced, a dozen Ellison supporters—including the congressman’s brother, Eric—chanted “party for the people, not big money” from the back of the Atlanta ballroom, with a few cries of “bullshit!” thrown in. While the formal final vote, sealed on the second ballot, was 235 to 200, in a show of unity, Perez was subsequently elected by acclamation. In his first move as chair, he announced that Ellison had agreed to serve as his deputy chair.

“If you’re wearing a ‘Keith’ t-shirt—or any t-shirt—I am asking you to give everything you’ve got to support chairman Perez,” Ellison told the room. Afterward, they switched campaign pins in a show of solidarity.

In the run up to the vote, some Ellison backers argued that there was no real case for a Perez chairmanship—that he was running as a check on Sanders’ influence and little more. But DNC members I spoke with seemed to understand Perez’s pitch quite clearly: he was a turnaround artist who had retooled complex bureaucracies toward progressive ends, first at the Maryland Department of Labor, then at the Department of Justice’s Civil Rights Division, and finally as President Barack Obama’s Labor Secretary. If progressives had forgotten what they liked about Perez, they needed to look no farther than the conservative Breitbart News, which once heralded Perez “the most radical cabinet secretary since Henry Wallace,” the New Dealer who eventually bolted the Democrats to mount a third party challenge in 1948.

The fights that Perez has waged over the course of his career track closely with those Ellison cut his teeth on in Minneapolis—housing discrimination, voter suppression, and living wages. Neo-liberal stooges still have a place in the Democratic party. But the DNC chair isn’t one of them.

Beyond their shared political priorities, Perez even offered a similar diagnosis as Ellison. The party had become top-heavy, focusing too much on the presidential race, and had neglected to compete on a county-by-county level. He advocated something resembling a restoration of former chair Howard Dean’s 50-state strategy, and proposed to spend more time knocking on doors in off-year elections. There was no talk of compromising with President Donald Trump; Perez dubbed him “the worst president in the history of the United States.”

Ellison sought to win the same way he always has, through a mastery of coalition politics. His backers included American Federation of Teachers, the AFL-CIO, Sen. Chuck Schumer, Harry Reid, Rep. John Lewis, and Sanders—many of whom found themselves on opposing sides during the president primary. The threat by OJ Simpson counsel and Harvard Law School professor Alan Dershowitz< to leave the party if Ellison won did not appear to have a substantial effect on voters. (Maybe they were waiting to hear from F. Lee Bailey.) He ran not as Sanders 2.0, but as a restoration of an even older form of Democratic progressivism, one evoked by the spruce-green colors on his t-shirts and tote bags—the campaign colors of his political idol, the late Minnesota Sen. Paul Wellstone.

Just a few hours before the election, there was an indication Ellison might come up short when the committee members voted on a resolution that would reinstate the party’s ban on corporate donations. The ban, which was first implemented by president-elect Barack Obama in 2008, had been dropped last year by the previous party chair, Florida Rep. Debbie Wasserman-Schultz. Ellison envisioned a party fundraising model in the mold of Sanders’ small-dollar campaign, and many backers had supported the reinstatement of the ban, although the candidate himself did not back the resolution.* Perez, unlike Ellison, never expressed any interest in reinstating the contribution ban.

The resolution brought on the most contentious 10 minutes of a weekend that, up until then, had been a love-fest. Bob Mulholland of California, the leading critic of the ban, chided critics as naive. He cited corporate opposition to ousted North Carolina Gov. Pat McCrory as proof that corporations aren’t all evil. Supporters of the ban, some of the new party leaders whom had been recently elected to their posts with the backing of Sanders’s supporters, implicitly tied the resolution to the senator’s one-time candidacy, warning that the party risked alienating voters who cared about money in politics. Jessica Sell Chambers, a Sanders backer and the newly minted national committeewoman from Wyoming, offered a succinct appraisal: “I belong to the party of the people and the last time I checked corporations aren’t people.”

Inside the Westin, where Democrats began assembling on Thursday, the notion that the chair candidates were engaged in a rancorous, existential fight seemed far-fetched. Perez, who was hoarse from two days of lobbying as he made a last-minute push Friday night, had taken to calling the event “Unity Saturday.” Even the most die-hard Ellison supporters were optimistic that the party would be in good hands win or lose. Each of the leading candidates devoted portions of their stump speech to a call for unity no matter who won.

“I really just want to like put at least four of them together,” said Dolly Strazar from Hawaii, a Sanders supporter who ended up backing Perez. Another voting member, Aleita Huguenin of California, predicted that the fight would quickly simmer down. “I’ve been through too many of them,” she said. “People are a little disappointed, they have two dinners, and will be back together.”

In reality, the contentious fight over the future of the party never really described the DNC race—but there is such a battle playing out across the country. Already, Sanders supporters, both organically and with the support of the Senator’s non-profit Our Revolution, have begun targeting the party’s apparatus at state, county, and local levels. They are poised to take over the California Democratic party in May, after winning a majority of delegates to the state convention in January. The Sanders wing is ascendant in Nebraska and Wyoming, and setting its sights on Florida and Michigan. Beyond party positions, re-energized Sanders supporters are talking openly about primary challenges to Democratic officeholders who support Donald Trump’s policies.

Less than a year after only 39 of 447 DNC members endorsed Sanders’ presidential campaign, his chosen candidate came about 15 votes short of taking over the whole thing. The numbers reflect Sanders’ forces growing strength in the party, a gradual upheaval that may only be sped along by Perez’s victory. DNC members from Wyoming—where the Vermont senator notched a huge caucus victory but due to party rules emerged with few delegates—who are not on board are feeling the heat. When Bruce Palmer, the party’s vice chair, told me he was supporting Tom Perez, he conceded that it may be to his own detriment. After all, he’s got an election next month.

*Correction: this article originally stated that Ellison had backed the proposed ban on corporate PAC donations.