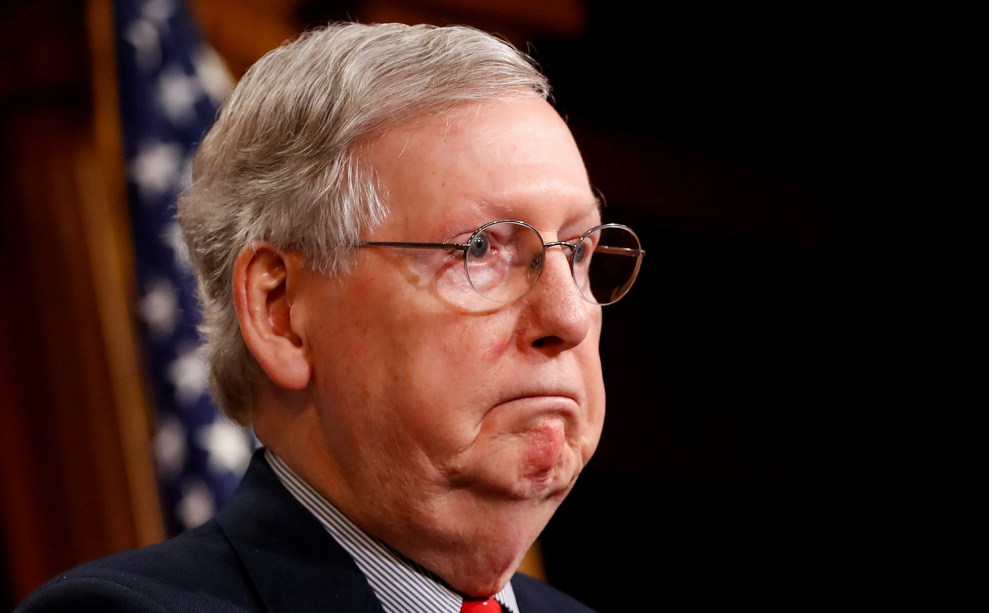 Republican leaders returned to their home districts this week for the first congressional recess of the year and were faced with a barrage of questions from large crowds of angry constituents packed into school gymnasiums and other public meeting spaces. Many lambasted their elected officials over GOP plans to repeal Obamacare, President Donald Trump’s ties to Russia, his cabinet picks, and more.

On Tuesday alone, Rep. Marsha Blackburn (R-Tenn.), in Fairview, Rep. Joni Ernst (R-Iowa), in Maquoketa , Sen. Chuck Grassley (R-Iowa), in Iowa Falls, and Senate Majority Leader Mitch McConnell (R-Ky.), in Louisville, were all met by loud jeers and calls to confront Trump over his most controversial policies, including his plan to build a border wall and block refugee resettlement.

At one point, one woman, demanding answers about the president’s energy proposals, told McConnell that if he properly addressed her concerns, she would “sit down and shut up just like Elizabeth Warren”—a reference to his controversial suppression of the Massachusetts senator’s reading of a Coretta Scott King letter last month.

Mitch McConnell got flamed by one pissed off constituent pic.twitter.com/PFGFoWtdUt

Here outside @MarshaBlackburn town hall in Fairview where there is a protest to be followed by an alt-town hall. pic.twitter.com/USM4lxixX2

The crowd jeers and chants after Joni Ernst ends her forum after only 45 minutes, few questions pic.twitter.com/aHrcbPMxv2

The citizen protests began earlier this month when videos from Rep. Jason Chaffetz’s (R-Utah) rocky town hall near Salt Lake City went viral after demonstrators repeatedly chanted “Do your job!” at the House Oversight Committee chair. Such images and others have inspired many Republicans to either substitute face-to-face meetings with conference calls or cancel town halls altogether. Or, as in the case of Rep. Dave Brat (R-Va.), to relocate a planned meeting 60 miles from where most of his constituents live. The move, which he blamed on crowd size, drew criticism from critics who charged Brat with attempting to evade protesters.

On Monday, Trump dismissed the hostile crowds as paid protests organized by Democrats.

The so-called angry crowds in home districts of some Republicans are actually, in numerous cases, planned out by liberal activists. Sad!